Did you know that the Classics teacher at Saint Kentigern College in the 1950s and 1960s had been Headmaster of King Henry VIII School in Coventry, England, during the war years when the centre of the city including much of his school was destroyed by German bombing raids? 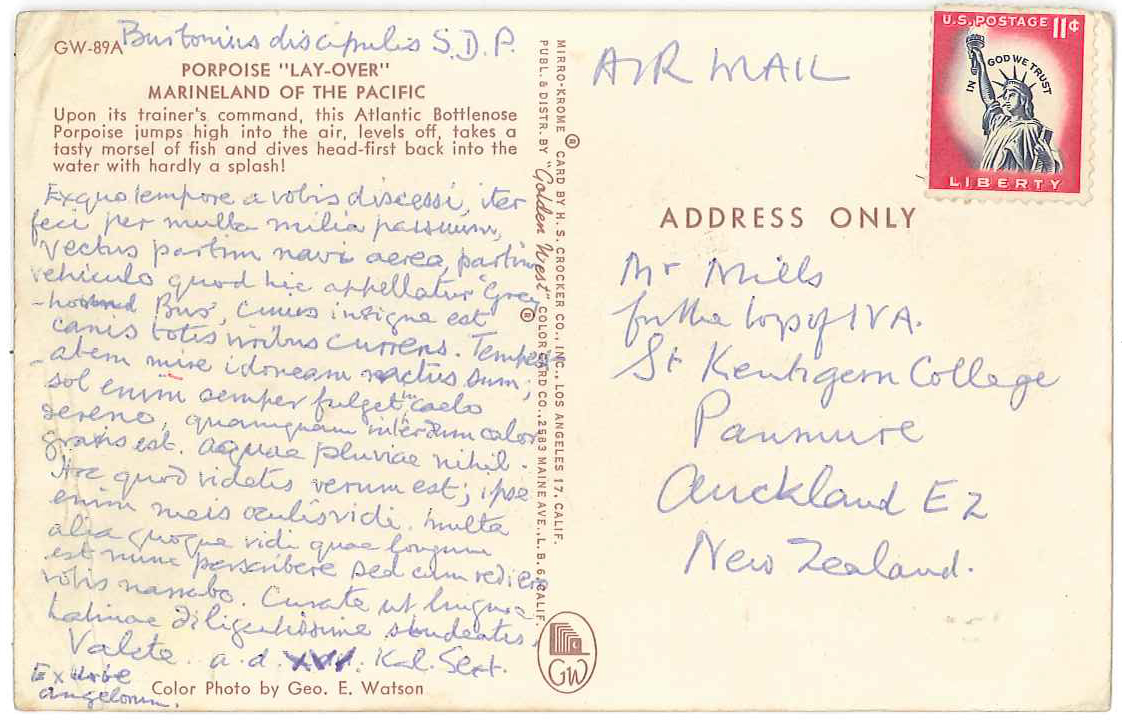 A distinguished scholar himself, Mr Burton moved to New Zealand after his ‘retirement’ and re-established himself as a classics teacher at Saint Kentigern, introducing the teaching of Greek at the College and mentoring talented students like the late Michael Stevens who went on to become classics scholars themselves.

The College Archives Centre has recently received two postcards written in Latin and sent by Mr Burton to his sixth form students in 1965. Writing whilst on a visit to the United States, Mr Burton very creatively used familiar Latin idioms, such as he had been teaching to his boys, to express modern ideas and experiences. The postcards together with a translation of the Latin have been given to the College by Mr John Mills who taught the Latin classes while Mr Burton was overseas.

Burtonius sends greetings to his pupils.

Since leaving you I have travelled many miles, carried partly in a ship of the air and partly by that vehicle which here is called a ‘Greyhound Bus’, whose insignia is a dog running with all its strength. I have experienced wonderfully good weather, for the sun always shines in a clear sky, although the heat is sometimes severe. No rain.

What you see (ie on the postcard, which has a photo of a porpoise jumping high in the air at Marineland) is true, for I have seen it with my own eyes. I have also seen many other things, which would take too long to write about, but which I shall relate to you when I return.

Be sure to study your Latin hard. Farewell.