The winners of the Year 8 speech competition at the College employed humour, statistics, history and academic references to support their arguments and keep the audience engaged. Having progressed from in-class competitions, the best orators were narrowed down to semi-finalists, from which the top nine were selected for the final.

The top three place-getters all choose topics that they are passionate about. Ella Shirtcliffe was judged the winner for her fervent claim that ‘messy is good’. Being messy saves time – instead of her wardrobe, Ella uses the floor-drobe and floor-ndry. Messy is natural – do the leaves on the ground rakes themselves into tidy piles, she asked? She also cited University of Minnesota research which claims messiness aids creativity.

In second place, Christie Martel took on the weighty subject of vaccinations. She argued that vaccinations are the only way to prevent some serious illnesses, and that it is selfish towards the rest of the population to not have it done. ‘For many diseases, vaccinations will only be successful if everyone has them,’ she stated. She also used evidence from the Centre for Disease Control and NZ Ministry of Health to dispute the claims of vaccine-related reactions.

Fraser McOmish was third with his speech which eased a concern that a great deal of Kiwis share – will the All Blacks win the Rugby World Cup? Fraser’s hypothesis is a resounding yes, based on the team’s winning record and its calibre of players, none less than ‘Richie McCawesome.’ He believes history will repeat itself: ‘Yes we lost to Australia in the Bledisloe Cup this year, but in 2011 we lost to the Wallabies and went on to win the World Cup.’

Well done to all the finalists and to Ella, Christie and Fraser in particular.

2nd place: Christie Martel – ‘Why we should all get accinations’

3rd place: Fraser McOmish – ‘Why the All Blacks will win the Rugby World Cup’

Highly commended: Dion Shen – ‘Why we should add the art of humour as a subject’ 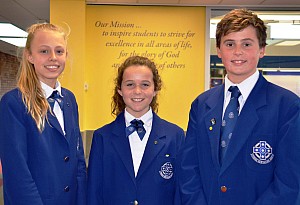