First place Year 7 Science Fair winner, Robbie King delved into the scientific world of all things magnetic with his winning investigation ‘Magical Metal Magnetic Magnets’ in the Year 7 annual competition. Robbie’s aim was to find if the number of magnet stages, magnets and balls on a magnetic rifle changes the firing range.

In third place, Peter Wallace’s investigation ‘Racing Reactions’ queried if using an aroma can stimulate the senses and quicken our response times. Also if there are certain flavours or smells we should avoid because they slow our ability to react. Using a combination of lavender oil, peppermint oil and Pascal’s curiously strong peppermints, Peter’s willing subjects sniffed and sucked and completed reaction tests for his data to be averaged and compared to their previous baseline data. Unfortunately Peter couldn’t prove that peppermint improved reaction times and concluded that the use of aromatherapy oils will not make people more alert.

In Years 7-10 at the College, girls and boys are taught separately in all their core subjects. The Year 7 science projects were judged initially within each class before the final winners were selected from all Year 7 classes. This year it was the boys who took all the top places! Alexandra Collinson and Elizabeth Lightfoot’s projects were highly commended and all five projects will now be submitted to the NIWA Manukau Region Science and Technology Fair. Best of luck to all students whose projects were put forward. 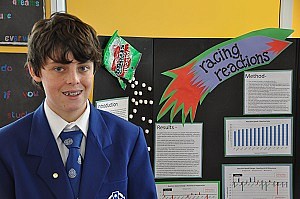 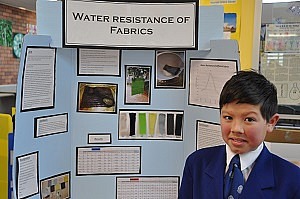 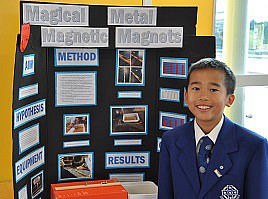