It was high finance at the school gates when the Year 2 girls at Saint Kentigern Girls’ School set up a stall after school to sell worm tea and worm castings. And they weren’t shy about turning a profit!

Earlier in the year, Year 2 established two worm farms in the form of two adapted wheelie bins with no less than 8000 tiger worms which had the potential to grow to a self-regulating colony of about 30,000 worms. Over the last two terms, the bins have provided the perfect environment for composting left over food scraps from school lunches. The girls have become very proficient at understanding what is and what is not suitable to place in the worm bins and with their sensibility towards sustainability, now think of their scraps as a resource rather than waste.  Worms like variety in their diet and with moisture added to the mix, a rich worm tea and worm castings can be drawn from the bottom of the bins at regular intervals that is a nutrient rich fertiliser.

The girls collected dozens of plastic milk bottles to recycle and have been diligently collecting the ‘tea’ and worm castings from the bottom of the bin. They are quick with information about the different properties of the two with the castings – worm ‘waste’ – being the richest source of nutrients.

As with all good business ventures, they discussed how they could benefit from this natural resource. They may only be 6 and 7 years old but a marketing plan was devised to ensure a maximum return on their efforts! Posters went up, flyers went home, labels were individually hand drawn, customer information sheets prepared and they decided on the perfect price point. They had also been carefully schooled on how to deal with their customers and were not the slightest bit reticent about upselling – or blatantly asking the mums and dads if they’d like to make a donation rather than receive their change! Over the course of 20 minutes hard sell, the girls raised $505.40 which will go towards the establishment of a vegetable garden next year. Who knows, we could be watching out for a Saint Kentigern Girls’ School Farmers’ Market next year! 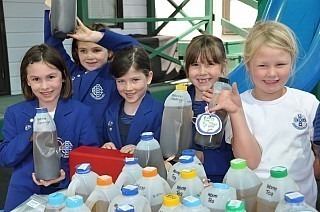 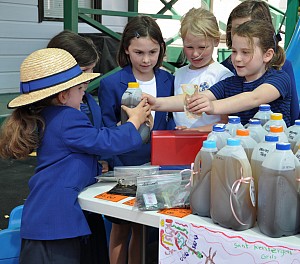