It was a very proud moment when the Girls’ School choir stepped out on the race track at Pukekohe to sing the Australian and New Zealand National anthems at the start of the V8 Supercars competition. Standing on risers facing down the track where all the cars and their drivers had gathered, with a film crew from Sky Sport right in front of them filming live to air, the girls sang to 40,000 people in the stands and to millions in front of television sets across the world without a hint of nervousness!

The 15 strong Saint Kentigern Girls’ School auditioned performers’ choir of 9 to 12 year olds had rehearsed the two national anthems, God of Nations and Advance Australia Fair, for weeks under the guidance of Mrs Nicola Brown. In the final stages they took their rehearsals outside to experience singing unaccompanied in the open air. There was much excitement on the morning of the event as they gathered at School for Mrs Dobson to check their uniforms and be given their pass to allow them onto the track.

Following their performance the girls were invited up to the podium on a viewing platform above the track to watch the start of the race. The roar of the engines was deafening as the cars sped by at lightning speed!

Our thanks go to staff member, Sue Mosen and her husband, Greg, the Event Director of the NZ V8 Supercar and Bathurst series, for making this possible. The school will receive a donation from the V8 Supercars and this money will be donated to the music department to allow for the purchasing of more orchestral instruments. 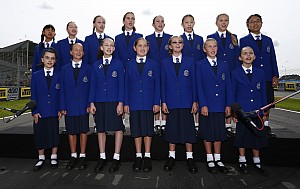 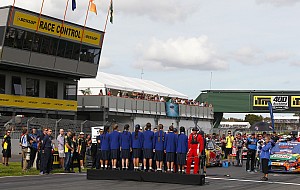 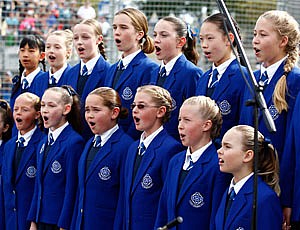