‘Maria….and suddenly I found, how wonderful a sound can be!’

These are the lines sung by Tony to declare his new-found love for Maria; a song that immortalises Leonard Bernstein’s West Side Story as one of the most successful musicals of all time.

Based loosely on Shakespeare’s Romeo and Juliet, West Side Story takes to the tenements of New York during the 1950’s; a time when a daring new youth culture, largely independent of adult influence, was starting to take root. The storyline stays true to the tragedy of innocent love caught in a complex social web that will determine its eventual demise.

At this point in history, the impoverished second generation, white immigrants from Europe felt their culture was threatened by the influx of new immigrant populations, especially the Puerto Ricans, who were beginning new lives in America. The young street gangs that arose from those ghettos demonstrated their frustration and tensions through turf wars and street fights. Love at first sight between Tony and Maria, from opposing gangs, sets off a tragic train of events that brings the story to its heart-breaking conclusion.

This year’s Senior School Musical was noted for its incredibly strong vocal delivery from all the lead characters, notably Manase Latu as Tony and Grace Sturgess as Maria. This strength in song, along with high adrenaline, energetic dance scenes, set the tone, rhythm and amazing youth vitality of the show.

In the opening scene, the tension begins to simmer between two rival gangs in Manhattan’s Upper West Side. The Polish Jets replace Shakespeare’s Montagues as second generation American teens while the Puerto Rican Sharks take on the role of Shakespeare’s Capulets. Tony is a member of the Jets, the American gang while Maria has both a brother, Bernardo (Alex Lee) and suitor, Chino (Joseph Bradshaw) who belong to the Puerto Rican Sharks.

Riff (Jamie Hoffer) as leader of the Jets tells his gang that he will challenge Bernardo, the leader of the Sharks, to a fight for dominance at dance taking place that evening. This simmering sense of ‘juvenile delinquent’ need-for-violence runs as an undercurrent throughout the show.

Riff seeks Tony’s help but Tony is caught; as co-founder of the Jets, he has a sense of obligation to his gang but he has recently found work at Doc’s drugstore and is turning his life around. It is at this point that the audience is introduced to the rich strength of Manase’s tenor voice as he sings the upbeat ‘Something’s Coming,’ imagining a better life on the horizon.

Maria is a recent immigrant who has found work with her friend Anita (Sharnika Leleni) in a bridal shop. As the girls prepare for the dance that night, Maria, like Tony, imagines new beginnings but her brother, Bernardo has already chosen Chino as a future husband for her.

The tension between the gangs at the dance that night is brooding and menacing, delivered through some brilliant, fast-paced, aggressive Latino choreography as the students ignore the ineffectual organisation by the teacher, Gladhand, one of only four adult roles in the show. Tony and Maria meet for the first time and the chemistry is instant but Bernardo angrily tears them apart and sends Maria home with Chino. Alex Lee, with both good voice and dancing skills, masterfully plays the role of the aggressive Bernardo throughout the show.

In a scene that plays homage to Shakespeare’s famous ‘balcony scene’ Tony finds where Maria lives and climbs the fire escape to vow his love. ‘Tonight’ is sung beautifully as a well-matched duet by Manase and Grace, bringing the promise of more from two lead characters with exceptional voices.

The next scene introduces two more dynamic voices as Sharnika Leleni as Anita, and Caitlyn Houghton as Rosalia compare life in America and their home island of Puerto Rico. Maria, sings the praises of the America, while fellow Puerto Rican immigrant, Rosalia, sings in favor of home. The underlying irony to this supposedly pro-American song is in the vibrant Hispanic musical style, matched by superb Latino dancing from the girls.

Word is out that a rumble has been planned. Tony visits Maria above the bridal shop and the following scene plays out a quiet interlude as amongst the bridal finery, to an emotional rendition of ‘One Hand, One Heart,’ the star-crossed lovers enact their imaginary wedding; a wedding that is never to be as the violence continues to escalate. As the Jets meet the Sharks, a fist fight fast descends into greater violence and as knives are pulled, Bernardo kills Riff.  In retribution, Tony, enraged over the death of his friend, in turn, kills Bernardo.

The second act opens with the girls unaware of what has unfolded, singing the joyous ‘I Feel Pretty’ as Maria gets ready for a date. When news is out, Maria is at first angry with Tony for the death of her brother, but forgives him. They sing of their desire to live somewhere without prejudice, ‘Somewhere. There’s a place for us.’

The writing is on the cards. As in Romeo and Juliet, a double cross leads Tony to believe that the spurned Chino has killed Maria. At the very moment, the lie is laid bare and Tony rushes to Maria’s arms, Chino steps out and shoots Tony in the back.

Despair, grief and rage fill the final scene as Maria, takes Chino’s weapon but stops short of taking her own life. Instead she makes an impassioned appeal to both gangs against the senselessness of fighting and murder. She lays bare the tough sociological questions that continue to plague society fifty years later. As a final gesture of hope for reconciliation, both gangs carry Tony’s body away.

From the stark, set of scaffolding, to the performance of the orchestra from the behind the stage, the dynamic choreography and the technical demands of lighting and sound, every facet of this show had been well planned. However, its major strength lay with the ability of the lead roles to deliver powerful, impassioned performances. Manase and Grace, in particular, are to be applauded.

Our thanks to Producer and Musical Director, Mr Ross Gerritsen; Director, Ms Emma Bishop and Choreographer, Ms Rochelle Craig along with their team of staff and students who manage behind the scenes. This was a fantastic show from a talented group of students and staff. 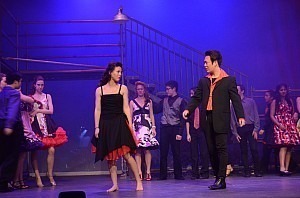 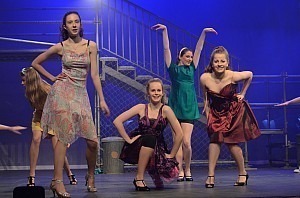 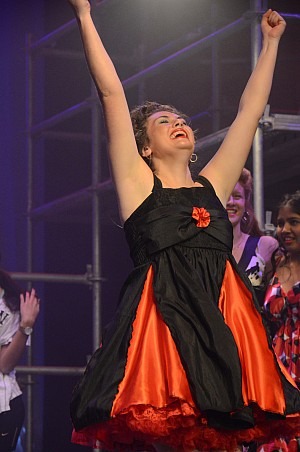 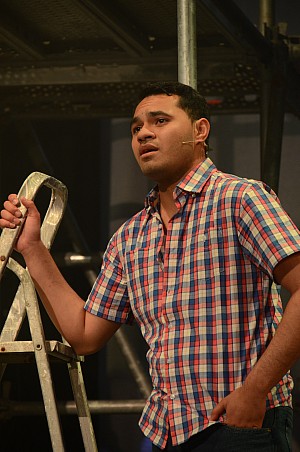 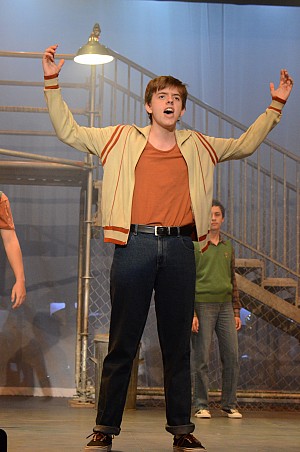 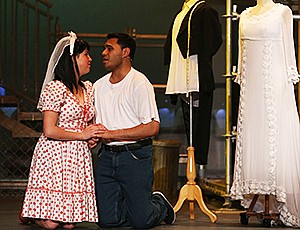