U Night For Malawi

On Friday July 25, the Sports Centre Lounge at the College will host a unique and very entertaining cultural event. “U Night For Malawi” is a Theatresports event which will involve Saint Kentigern’s best players from the last 10 years competing against this year’s Premiers Theatresports squad; an anticipated hilarious night showcasing the old and new of Saint Kentigern Theatresports fame.

Saint Kentigern College has been the most consistent finalist in the Auckland Theatresports Youth Program (TYP) over the last 10 years. The competition involves 22 schools across Auckland and our current premiere team, who are unbeaten this year, are preparing to play in the Eastern Zone Area Festival (regional semi-final) in the Music Centre at the College on August 1. Saint Kentigern last won the competition in 2009, were runners up in 2010 & 2011, third in 2012 and runners up again last year.

“U Night For Malawi” is an important “friendly” against some of our champion players of the last 10 years. It will be a final selection night, from which coaches, Mr Sheehan and Mrs Faharquarson will pick the 4 players who will represent the college at this year’s final series.

The night will feature players such as iconic 2012 Arts Prefect, superb actor and Theatresports captain Jeremy Tant and 2005 player Ashton Brown, who is a professional actor, highly regarded stand-up comic and Itinerant Drama Teacher at Saint Kentigern College. Ashton was in the original, first ever, Saint Kentigern representative Theatresports team in 2005. Saint Kentigern Old Collegian Blair Strang, who is a former Shortland Street star and a lead actor in last year’s iconic and popular New Zealand TV show Nothing Trivial will be the Entertainment Judge on the night.

Service to others is fundamental to the Saint Kentigern College Mission and as such; “U Night For Malawi” is also a fundraiser for a unique Saint Kentigern World Vision Malawi School project. The event on July 25th aims to provide better sanitation for schools in Malawi, including a new girl’s toilet in a school which very few girls currently attend because of the poor sanitation. The event will begin at 7pm in the Sports Centre Lounge, tickets are $5 and can be purchased at the Sports Centre Lounge on the night. Refreshments will also be sold, which will further contribute to the Malawi cause.

Families and Old Collegians are urged to put this date in their diaries, for what Mr Sheehan guarantees will be a, “laugh a minute expose on world, New Zealand and Saint Kentigern College culture. A great opportunity to cheer on our champion players of the past decade and our current premiere players who are hopefully on their way to bringing home the Auckland Champions Trophy for the first time since 2009. 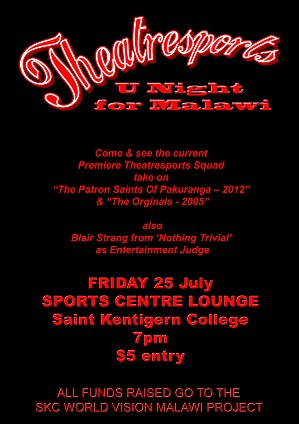