Based on Robert Louis Stevenson’s classic novel, 'Treasure Island,' there could hardly be a better choice of musical for an all-boys’ school than this rollicking, action-packed adventure, ripe with pirates, buried treasure, ships and distant shores, and a cast of lively characters! Bring on the boys!

The plot is familiar. Young Jim Hawkins is entrusted with a stolen treasure map, discovered in the sea chest of bitter ex-pirate, Billy Bones, and in this moment his life changes forever. 'X' marks the spot of the coveted buried treasure!

With the help of his guardian, Dr Livesey (Matthew Keyte) and Squire Trelawney (Fionn Steele-Smith), a grand adventure unfolds as they begin to search for the mysterious ‘Treasure Island.’ As land lubbers, if they are to sail to find the treasure, they need to hire a ship and crew but unwittingly they hire the very band of pirates from whom the map was stolen – and thus, the adventure begins!

George Wilby plays the young Jim Hawkins with charming innocence, but he is also brave to the core, showing plenty of ingenuity as he navigates the twists and turns in the story. When he becomes cabin boy on the ship bound for Treasure Island, he encounters the beguiling one-legged ship's cook, Long John Silver, but should he trust this cunning man?  George was a fantastic selection for this role with strong acting and singing skills, winning us over with his solo performance of, ‘I’ve tried to make them listen.’

The most coveted role in the show surely had to be that of the wily pirate, Long John Silver, whose scheming, devious ways were central to the plot. Josh King played this role superbly! With a parrot perched on his shoulder and a walking stick to assist his ‘peg leg,’ Josh was villainous to a tee in his portrayal of Stevenson’s central character, but also showed a softer side in his support of the young cabin boy, Jim. Josh brought strong vocals to the musical numbers, especially in the duet, ‘Good Mates’ with Jim. He is to be commended for a convincingly strong character performance!

Second in command to Long John Silver, Robson Reidy took on the role of pirate, George Merry, bringing an equally strong presence to the stage. From the moment the curtains opened, George and his fellow pirates commanded much of the action throughout the show, delivering a wide range of songs accompanied by some exuberant, well-choreographed dance and fight scenes. Each boy added his own nuance to his pirate character, with the whingeing pirate, Roger, played by Freddie Gardner, a standout performance. Together, they were an excellent cast of villains, and they clearly enjoyed every moment on stage!

Comic relief was delivered by eccentric marooned sailor, Ben Gunn, played by Thomas Bowden. Alone on an island for far too long, he’s losing his marbles but there is one thing he knows he longs for. Having survived on a diet of fish, in a superb vocal number, accompanied by scurrying mice, he pleads for ‘Just a little cheese on toast’ when Jim discovers him! Congratulations to Thomas for a role well played!

After mutiny breaks out, with the help of Ben Gunn, Jim bravely helps Squire Trelawney and his men to win through. They defeat the pirates, locate the treasure and sail home triumphant under the command of the imperious Captain Smollett (Oscar Horton) to split the spoils of the treasure chest!

The many and varied musical numbers were backed by a well-rehearsed student orchestra who also provided musical continuity through set changes. Whilst not in the limelight, they are richly deserving of accolades as are the student backstage crew who also had key roles to play out of sight.

This was a musical filled with humour, suspense, action, adventure, loads of heart and loads of boys! Each and every one of the boys deserved their place on the set and they clearly relished every moment they spent there. Well done boys! 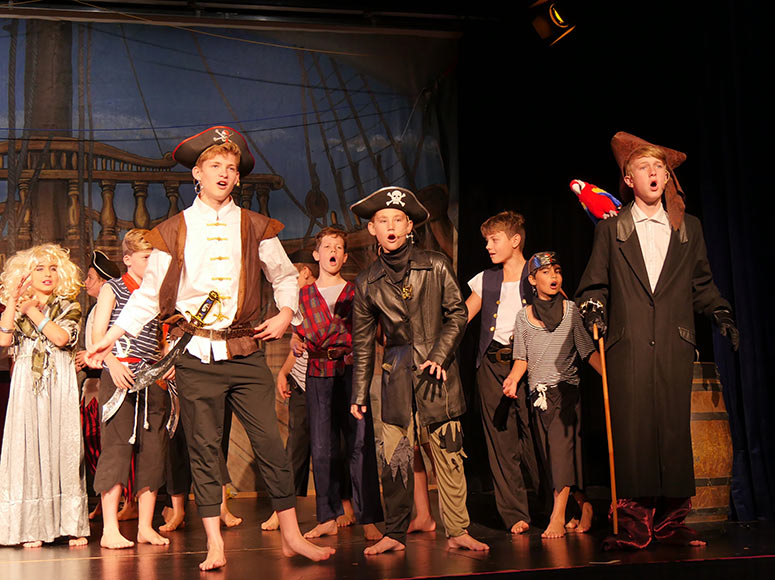 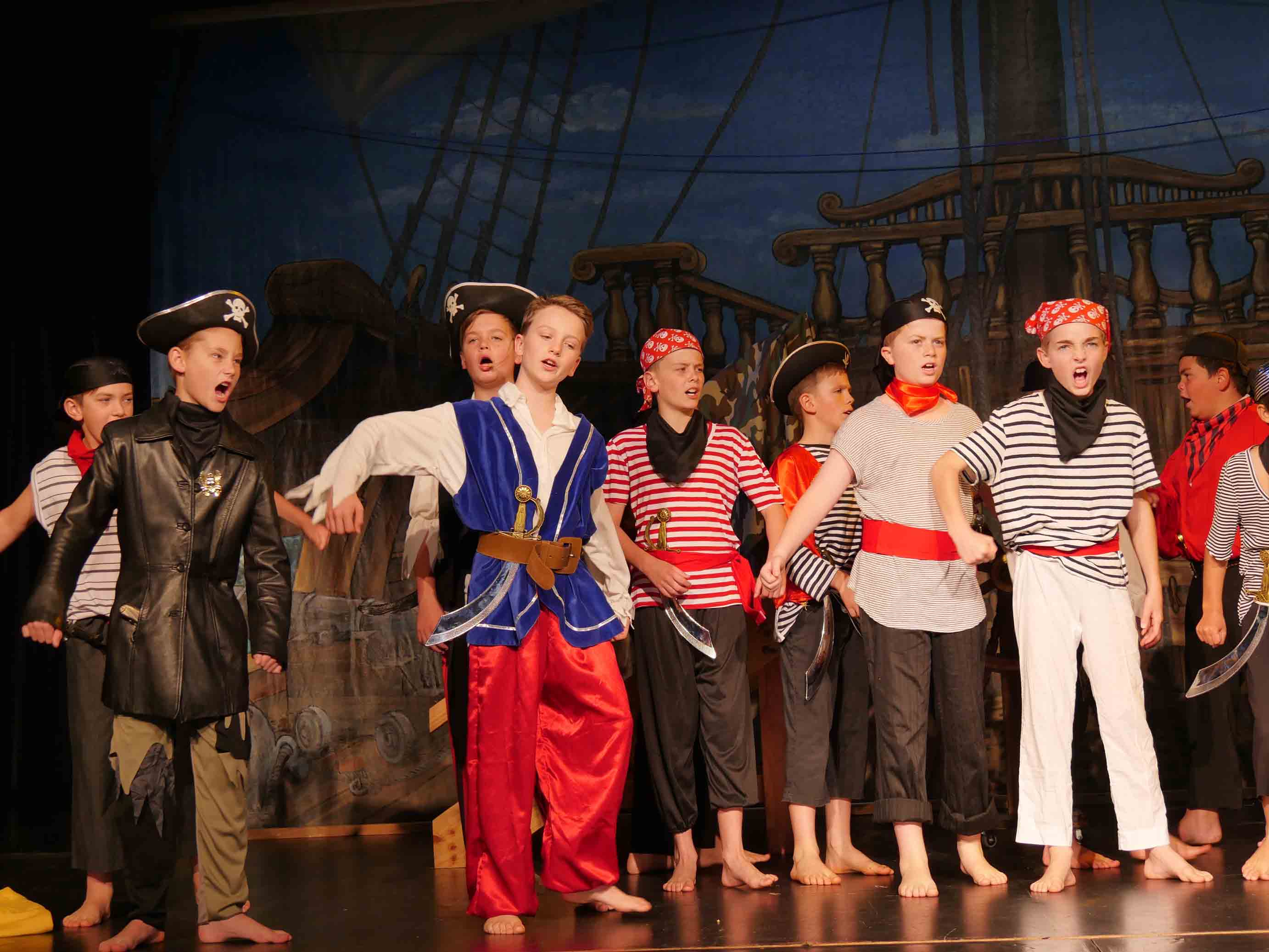 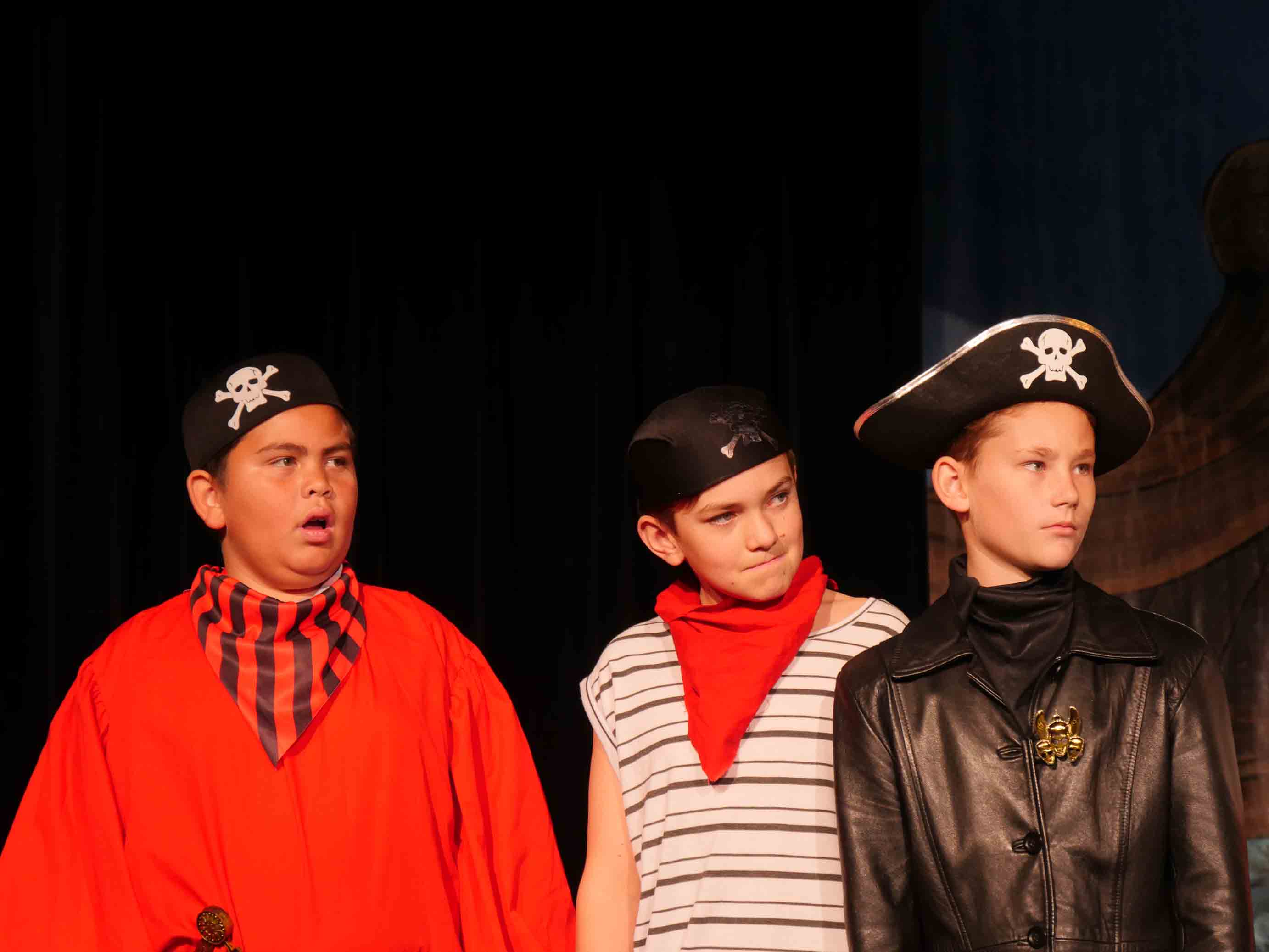 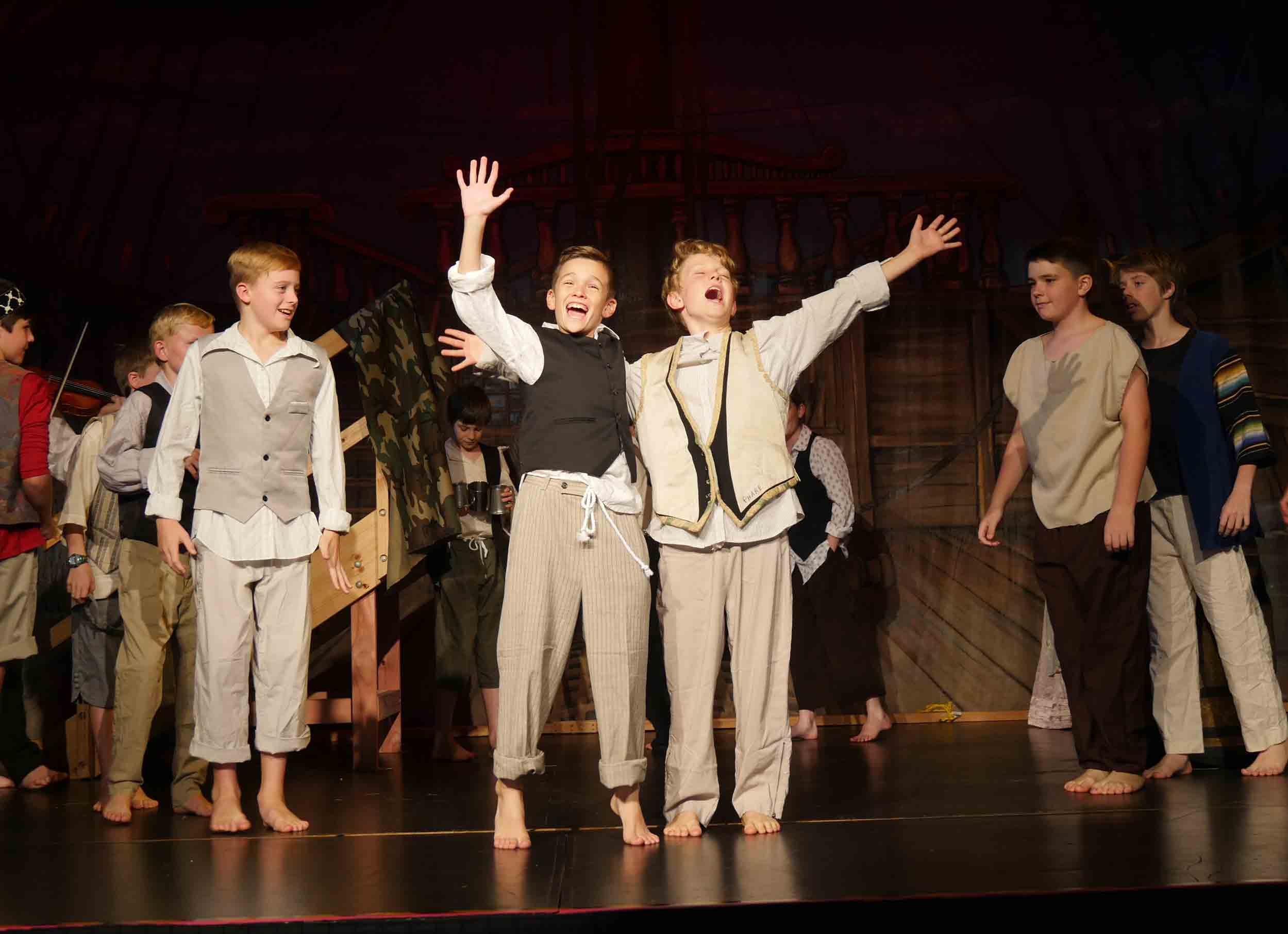 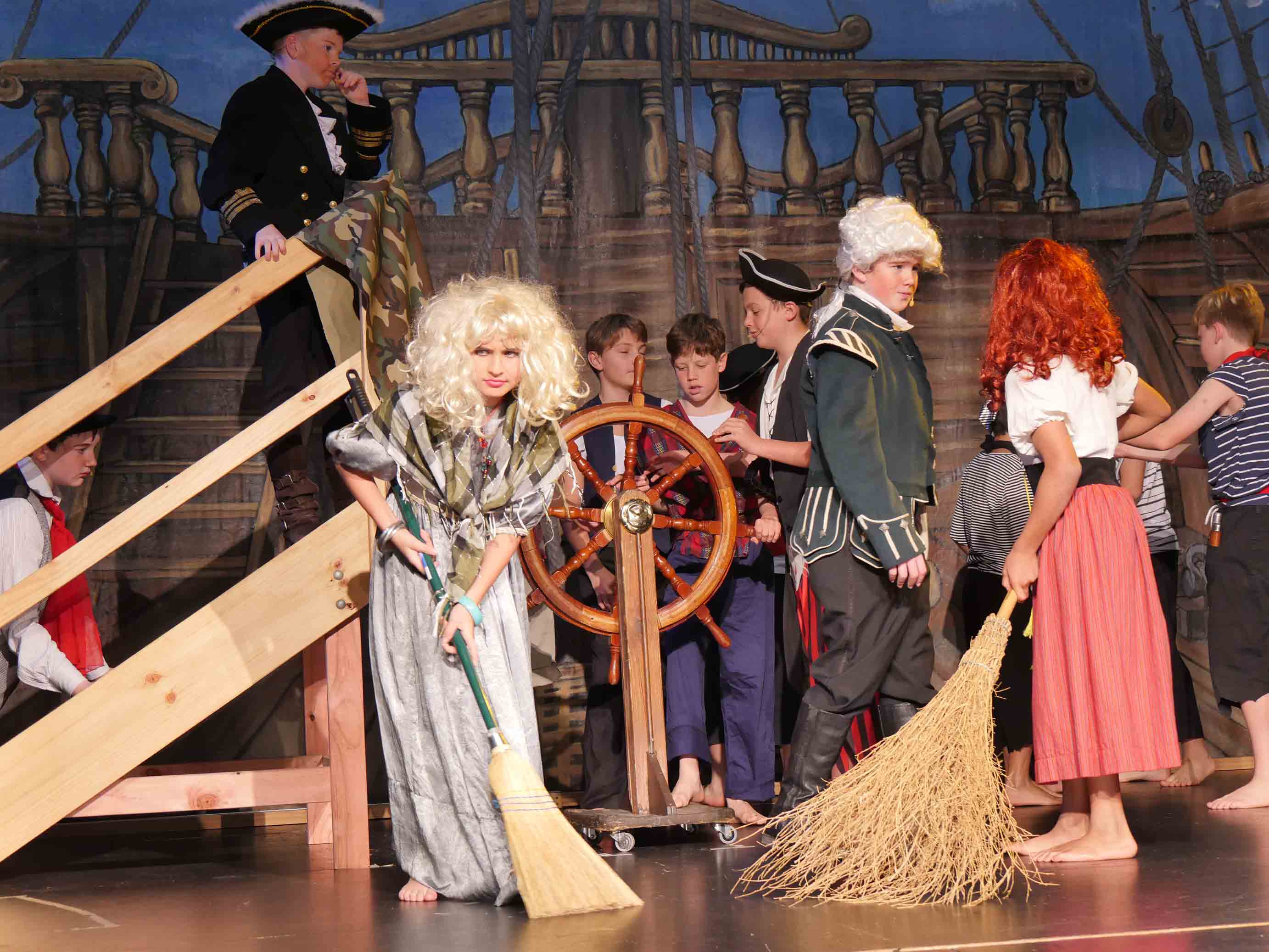