Congratulations to Nathan Bailey who has achieved the top Year 7 score in the country for the New Zealand and Pacific International Competitions and Assessments for Schools (ICAS) Science Test! This is the second time that Nathan has reached this pinnacle, having also been awarded the medal when he was in Year 5!

ICAS, commonly referred to as the University of New South Wales competitions, is conducted annually in Australia and over 20 countries globally. These are independent skills-based assessments and school tests for primary and secondary school students in Computer Skills, English, Maths, Science, Spelling and Writing.

In the competition, Nathan's science skills were assessed in key scientific areas of observing and measuring; interpreting; predicting and concluding; investigating; reasoning and problem solving.

Nathan's top score achievement qualifies him for a medal from the University of New South Wales along with a medal winner's certificate which he will receive at a presentation ceremony later in the year. 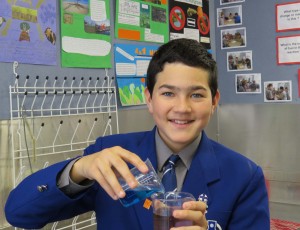