We are very pleased to welcome Mr Geordan Wilcox as the new Head of Dance at the College.

Geordan was a dancer with the Royal New Zealand Ballet (RNZB) for 13 years, has a Master of Creative and Performing Arts in Dance Studies as well as a Diploma in Teaching (Secondary), both from the University of Auckland. He has choreographed works for professional dance companies and has taught at both the University of Auckland and the New Zealand School of Dance. Geordan was also a guest dancer in the musical Cats while the production was on stage at the Civic Theatre in Auckland in 2009.

Co-curricular dance programmes that Geordan has been involved in include Stage Challenge, Bring It On and also the RNZB and Markham Arts dance education outreach programme. An active member in the wider dance community, Geordan currently sits on the board of the Tempo Dance Festival, New Zealand’s leading dance festival dedicated to providing a platform for dancers and choreographers.

Q. When did you realise you wanted to become a dancer?
I was 16 years old when I went along with my Mum to the Christchurch Arts Centre as she had a meeting. While I was waiting for her I got bored, so I went for a walk around the Centre and saw a dance class in a studio. It looked pretty exciting so I thought I’d give it a try. I had already learnt the current fad at the time – break dancing which I really enjoyed, but I didn’t know what kind of dance to pursue. Then I met Russell Kerr, an iconic New Zealand ballet choreographer who was the second Artistic Director for the NZRB. He suggested ballet as a great platform to start, so I did and just kept with it.

Q. What are some of the most memorable stages you’ve performed on?
Internationally, the most notable theatres were touring with the RNZB and performing at Sadler’s Wells Theatre in London and the Theatre Royal Bath in England, which is a beautiful old theatre. I always love the St James Theatre in Wellington but also the Civic Theatre in Auckland. I think it’s great that some of the older theatres in New Zealand have been restored and kept to the way they were. They have a lot of character and history so they’re really nice to perform in.

Q. What is your favourite ballet production and why?
Performing, there was a ballet choreographed by Jirí Kylián called Soldatenmis, he’s an amazing Czech choreographer who worked at the Netherlands Dance Theatre. It was an all-male cast and for me that was an amazing experience, dancing in a piece like that where we all had to dance together. The energy through the story was really great, which was based on soldiers going off to war.

Watching, I’ve always been a fan of Russian traditional choreographer George Balanchine’s work, but there are also some fantastic New Zealand dance companies that I really enjoy watching at the moment. I love the way the Artamira Dance Company brings traditional dance into the future by fusing Kapa Haka with contemporary dance. Also the Footnote Dance Company is a small company which works hard travelling around New Zealand to get dance out there into the smaller communities. Both have very good New Zealand choreographers.

Q. Who is your favourite dance partner?
Throughout my career I’ve had lots of different dance partners but I actually met my wife at the New Zealand School of Dance. The first time we danced on stage we performed a Pas de Deux together - in ballet terms it’s a French term meaning dance for two, or duet. It was the classical Le Sylphide, so it was quite special as I’ve only danced with her a few times.

Q. Who are your choreographer role models?
My very first ballet teacher Russell Kerr, who’s a very generous and inspirational choreographer. Russell’s been around for a long time and over the years he’s choreographed some of the big classics such as Peter Pan and Swan Lake. He’s very creative and knows how to motivate dancers and make them feel like everything they do is important. 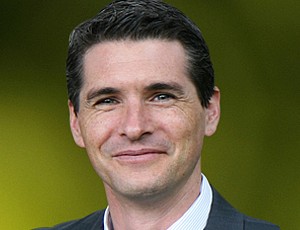