Congratulations to Andrew Chen who has achieved the top score in Year 9 for the New Zealand and Pacific International Competitions and Assessments for Schools (ICAS) Science Test! Well done Andrew!

ICAS, commonly referred to as the University of New South Wales competitions, is conducted annually in Australia and over 20 countries globally. These are independent skills-based assessments and school tests for primary and secondary school students in Computer Skills, English, Maths, Science, Spelling and Writing. Thus far we have results for Science and Computer Skills.

In the competition, Andrew’s science skills were assessed in the key scientific areas of measuring and observing, interpreting data, predicting/concluding from data, investigating and reasoning/problem solving over the knowledge areas of Earth and Beyond, Energy and Change, Life and Living and Natural and Processed Materials. Andrew said some of the questions were tricky as some of the multi-choice answers sounded so similar he had to think really hard!

Andrew’s top score achievement qualifies him for a medal from the University of New South Wales along with a medal winner’s certificate which he will receive at a presentation ceremony later in the year. This is the third ICAS medal for Andrew having been top in Maths in 2012 and top in Science in 2013!

Here we congratulate those students who were awarded High Distinction; an award for being placed in the top 1% of New Zealand entrants, and Distinction, given to the next top 9% nationally. 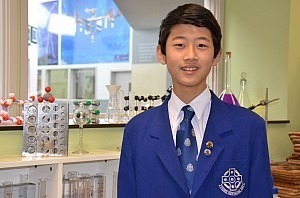