A new location and two new events for the 2014 New Zealand Secondary School (NZSS) Triathlon Championships meant some new challenges for the 30 College triathletes who attended. Despite the difficult conditions, we are very pleased that our students rose to the often difficult conditions to gain ten podium places at the Gisborne event. It was particularly pleasing to see some of our youngest competitors doing well at this national level.

On the morning of the first day, in conditions that the Gisborne locals unanimously described as ‘out of character’,  the youngest competitors battled 1.5 to 2m swells for their swim leg and an unrelenting headwind on the bike and run courses. The sea conditions deteriorated as the day went on with the U19 Girls’ division at one point being swept ashore when attempting to reach the second buoy! However, showing their usual tenacity and grit, our triathletes met the challenges (and surf) head on and competed outstandingly.

Special mention should be made of the triathletes who were attending their first ever Nationals - and arguably one of the hardest in the history of NZSS Triathlon events. Stand-out performances of the morning included Dylan McCullough in the U13 Boys. Exiting the water in 8th position, he decimated the field on the bike and then ran clear for an emphatic win. Ryan Church had an outstanding swim, leading the U14 Boys’ field out of the water. Liam Ward showed his good form in sticking to the leaders throughout the bike leg of the U19 Boys event and then ran strongly for his 3rd place.

Given the exceptional seas, the afternoon’s Tag Team Tri saw the swim section held in a nearby 50m pool. All our triathletes gave everything they had for their teams. The U13 Boys team (Jacob Hannan, Callum Walsh, Michael Lindsay) and U14 Boys team (Ryan Church, Dylan McCullough, George Ellett) both won their divisions.

On the second day, the inaugural Aquathlon Championships took on more of the look of a surf-lifesaving carnival as swimmers did multiple loops of the swim course, running in and out of the water. In the best performance of the morning, Madeline Evans put the horrors of her rough swim on the first day behind her to come away with a 3rd placing in the U19 Girls. The afternoon saw another new event, Team Super-Sprint for teams of two boys and two girls. Each member completed a whole but very short triathlon before tagging the next person. This concept proved to be very spectator friendly and enjoyable for all.  The U13 team of Annabelle Waterworth, Callum Walsh, Olivia Overfield and Dylan McCullough combined to take out the title. In the Under 14s, Caitlin Hollis, George Ellett, Emma Hannan and Ryan Church combined for their 3rd place.

Of note is Emma Hannan who, whilst only in Year 7 and at her first NZSS event, represented the U14s with real class, battling what was a strong cross-current in the sea to make the buoy when others would have given up. The U19 team of Madeline Evans, Mathew McCullough, Anna Murphy and Liam Ward gained 2nd place.

The third and final day saw the best water conditions of the 3-day tournament, as Open Water swimmers got to compete on a true open water course. The standout performance in this event was Olivia Overfield, who gained 2nd place in the U13 Girls. Mathew McCullough was unlucky not to claim bronze, just missing out in in the Under 19 Boys’ 1500m.

Our sincere thanks to the triathletes, parents and coaches. 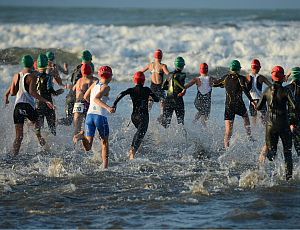 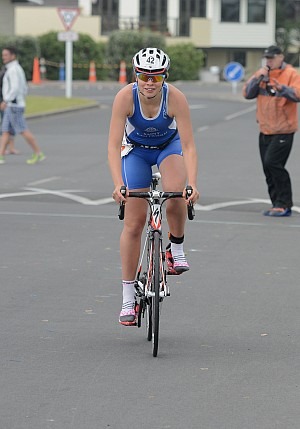 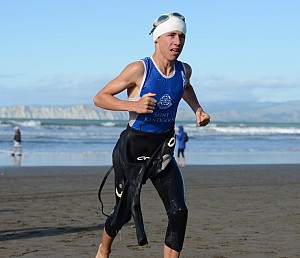 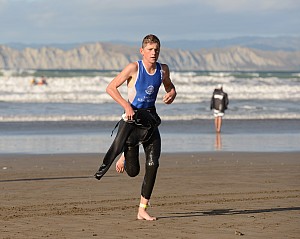 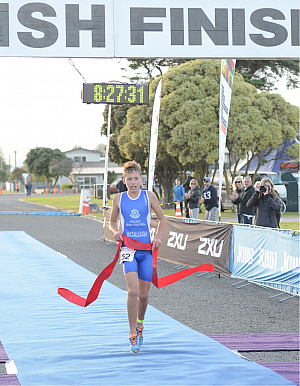