Like so many things during the course of 2020, when the Covid-19 lockdowns hit, the College Middle School musical was put on hold. Sadly, auditions had already taken place and they were four weeks into rehearsals when production came to halt.

But 2021 is a brand-new year with so much promise! Shrek was too good a choice of show to cast aside, and so careful thought was given when auditions took place once again. All students who had been cast in 2020, were invited to reprise their roles if they chose, meaning for the first time, the Middle School production also included students who are now in Year 11 – including Fionn Steele-Smith who retained the title role. And so, with a massive cast, orchestra and crew, well in excess of 70 students, rehearsals got underway in earnest to finally stage a sold-out three-night season. It was a long time coming but well worth the wait!

The story follows Shrek, the world’s most famous ogre - the big, green, trumpet-eared hero of the show - who is cast adrift by his parents at just 7 years old to ‘take his place in the world.’ In his first musical number, ‘Big Bright Beautiful World,’ we discover that the world is bright for everyone… but Shrek. Young Shrek is played briefly by Alice Beauchamp until Fionn steps in as the adult Shrek. Fionn’s delivery of a lovable outcast was spot on! Transformed to a bald, green ogre, by a carefully applied ‘green prosthetic’, he went on to prove he has a wide vocal range and great confidence on the stage.

As the years pass, Shrek takes up residence, alone in a swamp on the edge of the kingdom of Duloc, content with his solitude – until pint-sized dictator, Lord Farquaad (Henry Lang) banishes all fairy tale creatures from his realm.

Shrek’s home is soon overrun with the evicted characters, from Pinocchio to the Three Little Pigs, the Big Bad Wolf, Three Blind Mice, Mummy Bear, Daddy Bear and Baby Bear, Humpty Dumpty, the Pied Piper, the Wicked Witch and a host of other madcap characters. The spectacle of colour, the fantastic choreography and the ‘loopy’ dialogue set the scene for much silliness to come!

With his once private swamp home now teeming with the uninvited, Shrek sets of angrily to confront Farquaad but on the way, he meets the tartly funny, wise-cracking Donkey (Freddie Gardner) who insists on accompanying him. Freddie brings an infectious spark to the role winning over the audience.

Meanwhile, we come to learn a little more about the diminutive Lord Farquaad. All credit to Henry Lang who plays the entire show on his knees, with a set of short, costumed legs! Making the most of his character, complete with hilarious dance routines and pantomime villainy, Henry plays this to a tee! Farquaard has captured and threatens ‘Gingie,’ the Gingerbread Man (Sophie Ward) to discover  the whereabouts of a suitable spouse - for to become King and justly rule the kingdom, Farquaard must marry a princess.

Enter Shrek and Donkey. If Shek is to regain his solitude, the ogre must embark on a quest to retrieve Princess Fiona from a dragon-guarded tower.

Despite the years spent alone in her tower, we discover that Princess Fiona is not your average fairy tale princess – she’s just a wee bit feisty! Played by Poppy Ward as Young Fiona, Azul Hania as Teen Fiona and then Amelia Evangelidakis in the main role. Ever hopeful, she’s sure she will be rescued by a handsome prince. With a knight’s helmet covering his green head, Fiona is misled into thinking that Shrek’s arrival has answered her dreams – but there’s no time to dwell as the dragon has been wakened from her lair. The large head of the puppet dragon was manipulated by Eva Paton and Violet Taylor with the wings and fire cleverly choregraphed and portrayed by dancers.

Escaping the dragon, as the sun sets Fiona insists on setting up camp and then disappears. We discover that she harbours her own secrets – a curse causing her to live ‘by day one way, by night another.’ She too is green at night!

The opening of Act 2 is a show-stopper for Amelia, as Fiona sings ‘Morning Person,’ greeting the woodland creatures, including the Pied Piper and an amazing troupe of dancing rats! As they continue their travels, love blossoms slowly between Shrek and Fiona, beginning with a competition for the harshest life story in ‘I think I got you beat’ and then descending into the classic ogre courtship ritual – ‘the fart-off.’ Yes, the show is not short on flatulence!

A misunderstanding leaves Shrek and Fiona mistrusting each other, but as the wedding to Farquaad goes ahead, the sun sets, and Fiona transforms to the green ogress. The makeup team rose well to this challenge– requiring hastily applied green makeup and prosthetics between scenes as she too sported ogre ears!

Shrek declares his love, the dragon incinerates Farquaad and everyone finds cause to celebrate their individuality. The show finishes on a high, as the full cast delivers the well-known, ‘I’m a believer’ as an upbeat, cheery finale!

The cast, the orchestra, the backstage crew, the costumes, the makeup, the choreography, the sound and lighting, the set and the overall direction by drama teacher (and former student) Mr Ashton Brown – so many people, so much passion and so much talent. Wow! What a show! It was a long time coming, but well worth the wait! 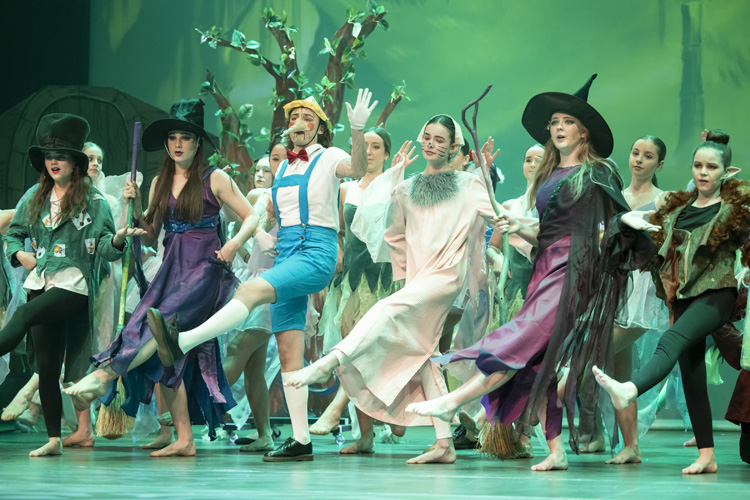 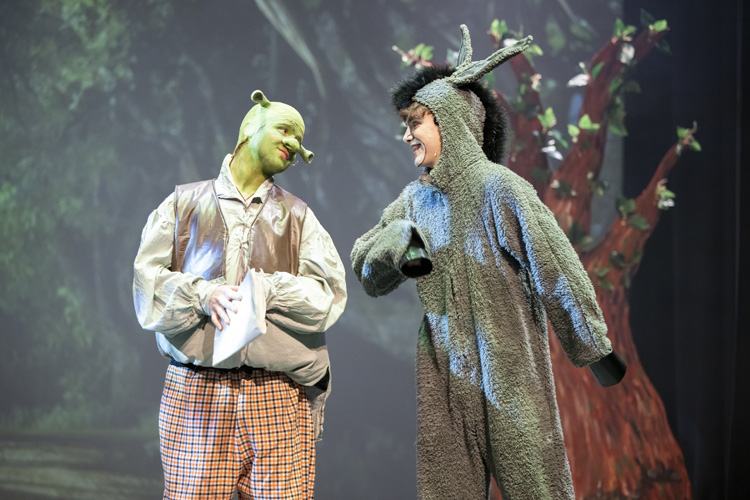 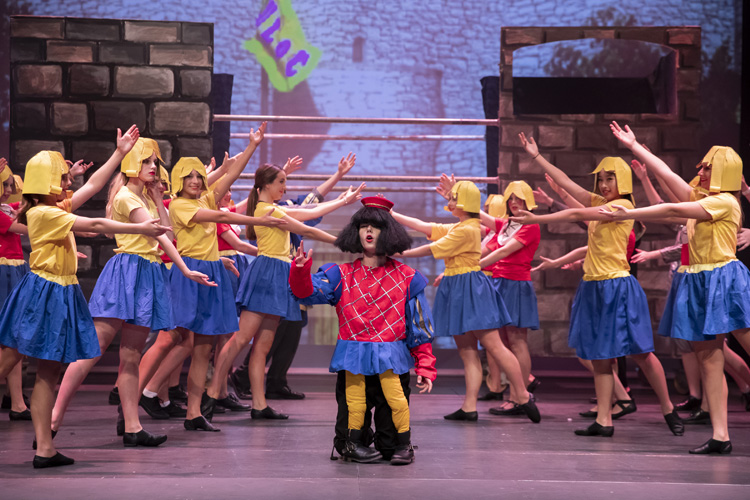 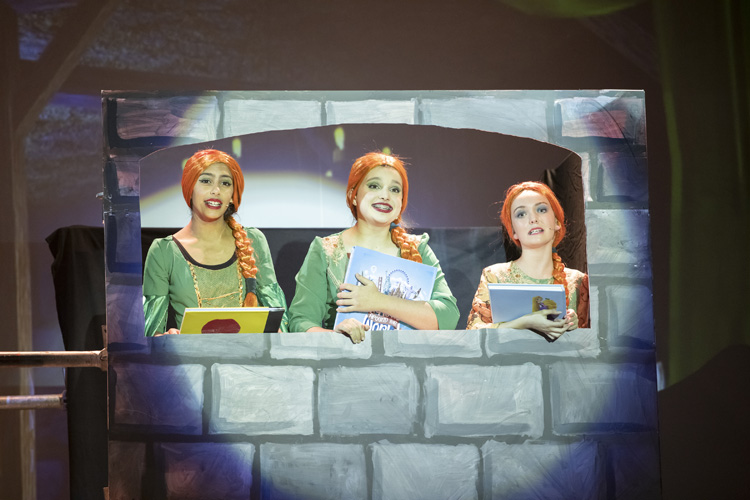 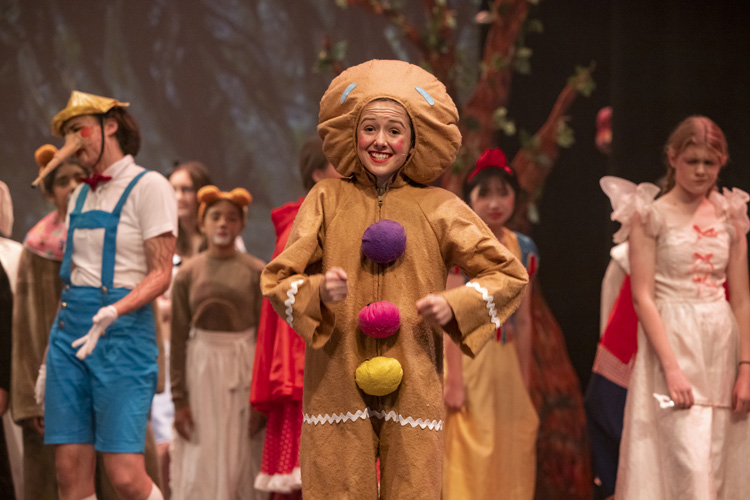 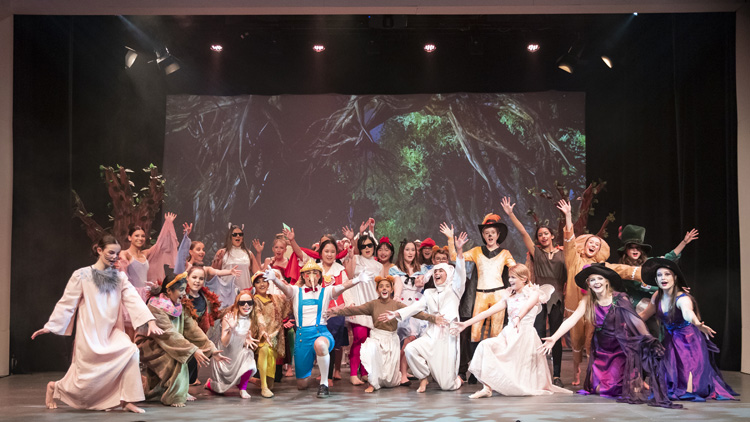