After a full week of world class rugby competition at the Sanix Rugby World Youth Tournament in Japan, the Saint Kentigern 1st XV have been crowned world champions after a convincing 40-8 win against the tournament favourite, Hartpury College from England in the final. This followed on from five earlier wins that resulted in Saint Kentigern, on behalf of New Zealand youth rugby, amassing a whopping 309 points with only 34 against. On their road to the world title, the team had won the Auckland 1A final two years in a row and both the New Zealand Co-educational title in 2011 and the New Zealand Top Four competition in 2012. Last season’s New Zealand win qualified them for the world tournament hosted in Fukoka Japan. The competition brought together eight teams from the host nation and eight international teams. The College team beat two Japanese teams and Russia in the pool play, beat Gose Industrial High School 66-12 in the quarter final before taking on St Joseph’s Nudgee College from Australia in the semi-final beating them 45-7. Throughout the tournament, England had been regarded as favourites to win, but New Zealand outclassed them on the field.

Head of Sport at the College, Mr Martin Piaggi has reported on the trip:
When the Saint Kentigern College 1st XV left New Zealand on Tuesday the 23rd of April, only two of the 30 man squad had been to Asia before. The experience of arriving in Bangkok at 11pm to a hot and humid 29 degrees, then negotiating the mad chaos that is Bangkok with its traffic, its food and its relentless heat was in itself an experience of a life time for the team.

The boys had the opportunity to get two days training to acclimatise to the heat - as well as some serious shopping and, boys being boys, eating!

This is a tight group of young men. Many of the squad have been together for three years but all of them have gone through the intensity of pre-season training and they are professional in everything they do. The management of the team through Mr Jerry Leaupepe and the coaching by Tai Lavea and Josh Syms ticks all the boxes and for many of the boys this will be as good as it gets in terms of their rugby careers. With the added value of having Josh Rodgers (physio) and Scott MaClaren (conditioning trainer), this team is as well prepared as any in the world of school boy rugby. And all these individuals make up what is the Saint Kentigern College 1st XV TEAM. No one, no individual is bigger than the team.

So it was with the ground work set that the team flew from Bangkok to Fukuoka Japan, and the SANIX World Youth Tournament. From the moment the boys booked into the Global Arena accommodation, the focus was on representing the College and New Zealand with the professionalism that has become a hall mark of Saint Kentigern College rugby. T.J. Faiane was bestowed the honour of accepting the welcome by Japan on behalf of all the visiting teams. He did this with humility, dignity and sincerity.

It would be easy to make a call that only 4 of the 16 teams were of a high standard and the scores probably suggest that many of the games were one sided. From a viewing point though, you have to understand that the eight Japanese sides play an incredibly fast paced game. Their recycling of the ball is in a league of its own. They are also very physical. What lets them down is their one on one tackling and they have no game breakers as we do. But make no mistake, when you play a Japanese side, you know you have come up against a side that is totally committed to the cause. They never give up and they are proud to represent their team. Some of the other International teams like Korea, Russia and even Canada (this year) were not as well prepared as they could be but that was part of the experience.

This trip was never going to be a holiday. It has doubled as our preseason campaign and, as the defending Auckland 1A champions, we need to be prepared for a season where we will be tested by everyone. The goal was to win the tournament but the opportunity to settle on combinations and give bench players time on the field has been invaluable.

Thankfully though, the boys were given the chance on their day off to visit Nagasaki and the Peace Museum documenting the 2nd Atomic explosion which wiped out an entire city at the end of WWII. This will be an experience the boys will never forget and prompted great debate in the bus on the way back to our accomodation.

The Tournament itself started on Sunday April 28 and finished with the final on Sunday May 5.

In the final we battled the old foe in Hartpury College from England – a battle between the very big and confident English school boy champions and the very skilful and expansive New Zealand school boy champions. We could not have been more proud of the team. Everything they did today was in keeping with what they do every game day. They started their warm up exactly one hour before kick off and they went through their routines with the same accurate precision that they have all week. And when they started the game, you could tell they had lifted themselves to play a knock out final.

Blake Gibson scored first after a 10 minute arm wrestle and Will Raea converted. Then the boys were hot on attack. Hartpury coughed the ball up  from the scrum and Sam Nock raced down the blind side outsprinting the English speedsters and we went 12 points up. Blake Van der Maas continued his good form, barging over for another try which Will converted. Hartpury then had a period of play where they had an abundance of possession but could not penetrate the defensive systems the team has perfected. The best they could come away with was 3 points. When Suli powered over for the first of his tries and Will converted, you could sense that Hartpury were resigned to their fate. At half time the score was favourably 26 to 3.

The second half started pretty much the same with Blake Gibson picking up his second try which Will converted and Saint Kentigern led 31 to 3. Hartpury then had their best passage and eventually mauled their way over for a try which went unconverted. After a pretty lack lustre second half,  we did manage to score another late try to Suli and Will converted his 5th conversion from 6. The final score was a very satisfying 40 – 8 to New Zealand.

In triumph the boys remained professional and demonstrated joy and excitement while acknowledging their opposition and thanking their supporters. As well as being presented a handsome trophy and a medal for each player T.J. also received a large basket of the local rice.

It's too hard to single out the champions in this side and as I have mentioned, this is a real Team. Management, coaches, physio, trainer, starting 15, reserves and non-playing reserves, everyone contributes. Personally, I think  TJ Faiane was the player of the tournament. He has taken his game to a new level. Both on attack and defense he was without peer. Suli is an athletic specimen who provokes much debate as the gifted game breaker. Cody Wheeler, Blake Gibson and Dillon Wihongi will be as good a loose forward trio anywhere in the world of school boy rugby. Patrick Herbert is another gifted athlete as is Sam Nock. Jethro Felemi continues to improve and Will Raea added vital points in the final. Jack Falloon was an outstanding leader on the field. 2013 will be a difficult year for the 1st XV. We have a large target on our back. Everyone will play a test match against us this year. There will be real bragging rights associated with beating Saint Kentigern College.

Thank you to all of you who have supported us. This was a huge undertaking to get the team to Japan. Without the support of all our sponsors, all of our parents, friends of the College and the Trust Board, we would not have been able to achieve what we have. Please continue to support us through the season. 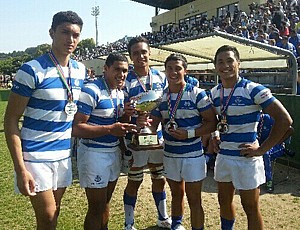