Four Saint Kentigern Golf teams competed in the prestigious Auckland region National Qualifying event with the hope of winning the title and gaining entry to the National competition. The three lowest gross scores counted from each four person team.

The competition was held on a beautiful sunny day at the Pakuranga Golf Club and  it was the Saint Kentigern Premier number 1 team who beat off all the other challengers to take the title of best golf team in Auckland.

The event was not easily won as late in the round, when players found the pressure build, uncharacteristic mistakes were made. With one hole to play, the Saint Kentigern College Premier Team were one shot behind King’s College. Our number 1 and 2 players, Andrew Meng and Tommy Liu had competed play with rounds of 71 and 73, and the two remaining players, Kelvin Chiu and Karan Nalam were still on course. Both players made pars on 18 while the best the King’s College team could muster was a 1 over bogey.

At this point both teams were tied on 224 points and, in the case of a tie, all four scores are added together and the Saint Kentigern Premier team of Andrew, Tommy, Kelvin and Karan totalled 10 shots better than that of King’s - and the trophy was ours! 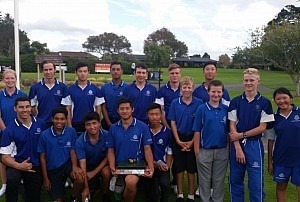