Signalled as a young cyclist to watch, Old Collegian, James Fouche proved his worth after pulling ahead of an experienced pack, to earn an emphatic victory at the men's elite road national championships in Napier last week.

Along with 11 other riders, James made an early statement in breaking away to take the lead over the nine climbs of 'Hospital Hill' that formed part of the 166km course. The 20-year-old crossed the finish line over three minutes ahead of his nearest rival, to claim the most prestigious prize of his career to date. This backed up his win only days before in the U23 Time Trial.

James won the U23 title last year and spent 2018 riding in top age-group races in Europe, where he is set to return after being re-signed by UCI continental team, Team Wiggins. He now has his sights set on a return to Europe, in particular the Nations Cup and Tour of Flanders in Belgium with the New Zealand national team. ‘It is cool to be able to thank them by taking the national jersey back to race for them this year,’ James said.

A College student from Year 7, James was a stalwart of the cycling team, taking on the captaincy of boys’ cycling in 2015. Whist he started out with the Saint Kentigern College Triathlon Team, he found that swimming ‘wasn’t my sort of thing’, however, cycling was. A love of the speed of cycling channelled his energy in that direction in Year 9. Multiple success followed during the next five years while at the College, including competing in the UCI World Championship in Richmond, Virginia in his final year.

After graduating, he gained a second place in both the 2016 Oceania Road Race Championships and the Time Trial. A few weeks later he won the U19 National Time Trial Championships. Both those results helped him to be selected for the UCI World Championships in Doha, Qatar later that year, which proved a further learning experience. In 2017, James competed in the U23 Giro d'Italia which is one of the biggest races for U23's. After competing creditably in this Italian tour, he headed to Belgium where he won two prestigious titles and placed second twice, along with winning the National U23 Road Race. These top placings meant James was awarded the NZ Cycling Corp Memorial Trophy, the first recipient of this special award. The trophy is made from a cobblestone from the Kemmelberg Climb in Belgium and is mounted on a piece of timber from a WW1 trench where the NZ Cycling Corps fought – a significant trophy and memorable achievement. James said that it was special to be the first recipient and that he gained increased motivation for racing the event after learning about the history behind the trophy.

James has always said that he is thankful for the support he received at Saint Kentigern, and having Rick Faulding as the Triathlon and Cycling coach was definitely a big influence. At College he also met his coaches, Patrick and Tammy Harvey who coached at the College the first few years he was there and have remained influential in his training. 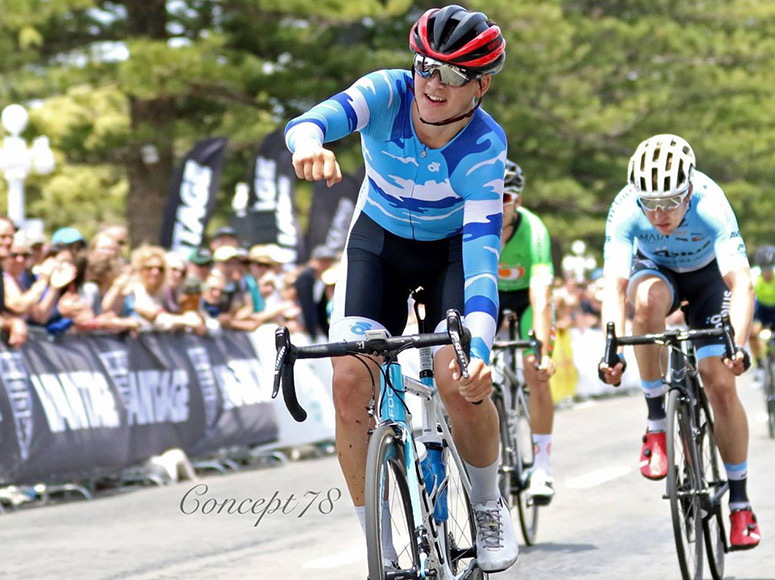