Following on from their success representing the School at the Remuera Zone speech final, Joe Duncan (Year 7) and George Beca (Year 6) went on to place second at the Remuera Lions Club Speech Competition last night.

Joe told his audience he could have been neglected, underestimated and misunderstood - a secretive loner lacking in ambition. We were, however, glad to hear that in fact he does not suffer from 'middle child syndrome' despite having older and younger siblings! On the contrary, he sees himself as trailblazing, innovative, free thinker with peacemaking skills after time spent in the middle sorting out problems between the age groups!

Winner of the Middle School competition was Year 6 student, George Beca who left the audience thinking about how we can be more tolerant. He challenged everyone to change the way they think about other people to move towards making the world a more tolerant place. He finished by quipping that he'd start with his sister! 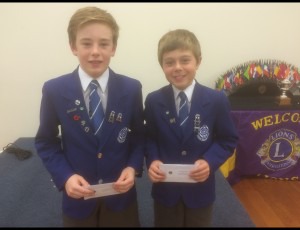