Academic, sporting and cultural successes were proudly acknowledged this morning at the Middle College Prizegiving. The Sports Centre was abuzz as families, friends and specials guests of our Year 7-10 students came together to celebrate another successful year.

Upon arrival, the official party was piped in by Elijah Wong, followed by the New Zealand Anthem accompanied by the Middle College Wind Band. Principal, Mr Duncan McQueen formally welcomed everyone before those gathered stood for the Prayer of Saint Kentigern.

Trust Board Chairman, Dr John Kernohan congratulated the students on their achievements and encouraged them to continue working hard and to be great role models. Head of Saint Kentigern, David Hodge thanked the staff and Mr McQueen for their hard work, leadership and commitment throughout the year. Mr Hodge concluded by congratulating the students before each age group came forward to collect their awards from Trust Board Members, Mr M Conelly and Mr T Tiong, Mr Kernohan and Mr McQueen.

The Cameron Cups for Citizenship were awarded to Jade Nomani and Melody Lui-Webster for their worth contribution, and the Year 7 and 8 Menzies Cup for Citizenship was awarded to joint winners, Ricky Shen and Katelyn Quay-Chin. Cups were also awarded to Eva Melhuish and Ethan Agaimalo for showing ‘All-Round Ability’ throughout the year. The top honours of the morning went to Ethan Fung as Dux of the Middle College; a student who has attained significant academic and co-curricular achievement. Ethan thanked his friends, family and the Saint Kentigern staff before explaining his success wouldn’t have been possible without them. He concluded by encouraging the students to work together and support one another.

To conclude the formalities, Mr McQueen thanked everyone before Reverend Smith closed in prayer and The Saint Kentigern College Second Pipe Band played. 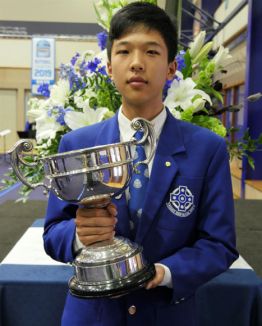 Ethan Fung has the honour of being awarded the Dux of the Middle College in 2019.

Ethan has consistently achieved Excellence or Excellence Plus in his core subjects which include, Year 11 Science and Year 11 Cambridge Mathematics in Year 10, with a total GPA of 397. These exceptional results are underpinned by his outstanding effort. In 2019, Ethan received a Distinction award in the Australian Mathematics Competition and was placed in the Top 100 in the New Zealand Junior Mathematics competition. Today he has also received Academic Honours and his class prize.

Ethan has been an excellent role model as a Middle College Leader. In addition to his academic and co-curricular achievements he shows a genuine interest in his fellow classmates. With his commitment to strive for excellence in all areas of life, Ethan is a true Son of Kentigern. 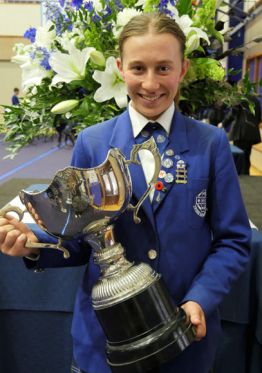 Eva is an exemplary student in every respect. She fully embraces all opportunities on offer to her. Eva’s outstanding attitude and effort in her academic studies have led to excellent grades across all her subjects.

She has been an excellent role model as a Middle College Student Leader, positively and energetically representing Chalmers House with pride and service to others.

In addition to her academic success and leadership, Eva has shown an incredible capacity to embrace and excel in a myriad of co-curricular endeavours.  This year, she has participated in the Bronze Duke of Edinburgh Award and has been involved in the Girls Cycling team, the Open Water Squad and the Triathlon Squad that won the National Team Title at the Triathlon Nationals.  She has also competed at both the AKSS Triathlon and Aquathon Champs.

THE J.E.H KURURANGI CUP – For The Year 10 Boy Showing All Round Ability
Ethan Agaimalo 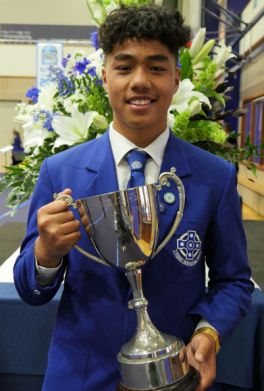 Described as diligent, responsible, courteous and a natural leader, Ethan is an exceptional all-round student who is highly respected and admired by his teachers and peers.

His outstanding attitude and effort underpin his strong academic results.

He has been a highly effective Middle College Student Leader, representing Stark House with pride, sincerity and care.

In 2019, Ethan has also been involved in a range of sporting and cultural endeavours at the College. He has been member of the Year 10 Rugby Development Programme, the Under 15A Rugby team and the Senior Touch team. Ethan was a key member of the Samoan Cultural Group at the Saint Kentigern Cultural Evening, and also danced with his sister paying homage to their Tongan Heritage and family. 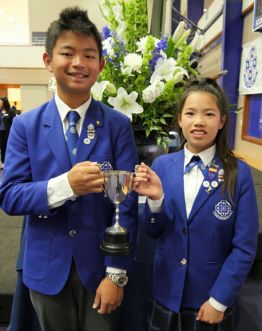 Ricky Shen
Ricky is a reflective and motivated student with an innate desire to succeed, as well as being an exceptional role model and leader of others.  He has excelled academically, and he has been involved in a wide range of cultural and service endeavours, with a personal highlight being the opportunity to represent Year 7 and 8 students at the annual Presbyterian Schools Youth Leadership Conference in Term 3.  Ricky’s humility, positive attitude and commitment to everything he undertakes has earned him the respect of his teachers and peers and we have all appreciated and benefitted from his maturity, wisdom and kindness.  He leads by example with his caring nature and his constant cheerfulness. Ricky can be extremely proud of his outstanding achievements this year and is a worthy co-recipient of the Menzies Cup for Citizenship.

Katelyn Quay-Chin
Katelyn is an outstanding citizen of Saint Kentigern College. She has been involved in many facets of College life. Katelyn is a high achiever both in the classroom and on the sports field. She still finds time to involve herself fully in a range of other co-curricular activities with a strong focus on service to the College and to others. This has included completing her Silver service award and being involved in activities like Seedlings for Service, World Vision 40 Hour Famine, Shoe Bank and Goodfellow apprenticeship. Katelyn always gives of her best and is consistently kind and helpful to others. Her humility, coupled with a great sense of humour endear her to all. Katelyn is a natural leader and she was selected to attend the annual Presbyterian Schools Youth Leadership Conference in Term 3.  Katelyn shows initiative and compassion and is a worthy co-recipient of the Menzies Cup for Citizenship. 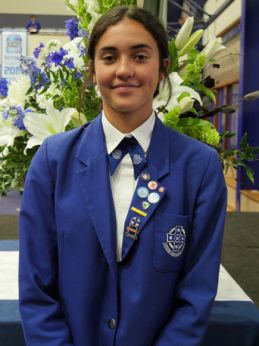 Jade exemplifies what it means to be a student of Saint Kentigern. In Year 9, not only has she achieved very good academic results, she has also thrived in a myriad of co-curricular activities, both sporting and cultural. Her sporting prowess is exceptional in both Athletics and Netball. Jade won the Athletics Championship Trophy, representing the College in Eastern Zone Athletics and AKSS Mixed Cross Country. She has been in the Sports Development programme for Netball and has played in the Netball Mystics team. Jade is also a valuable member of the Kapa Haka group. She has a friendly personality and positively engages with students across year levels, who enjoy her energy, humour and natural leadership. The College is very proud of Jade’s citizenship and all-round achievements this year. 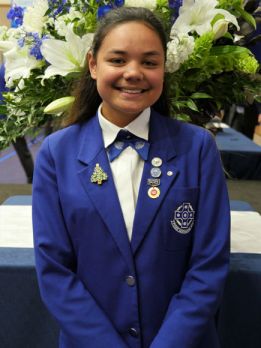 Melody is a worthy recipient of this award showing confidence and natural leadership in all she undertakes. Described by her teachers as vivacious and hard-working, Melody has managed a busy schedule exceptionally well and has achieved many outstanding results both academically and in the performing arts.  Melody’s involvement in the Dance Showcase, the Chalmers House Band, Kentoris, the Massed Choir and her lead role in the Middle College Production of ‘Chitty Chitty Bang Bang’ led to her receiving the award for Middle College Performer of the Year. She also won the Middle College Solo Music competition. Melody is respected as a role model of exemplary citizenship. 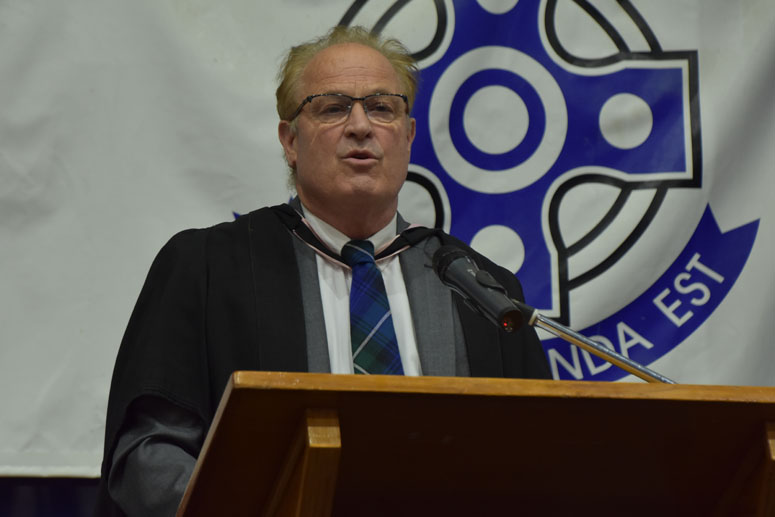 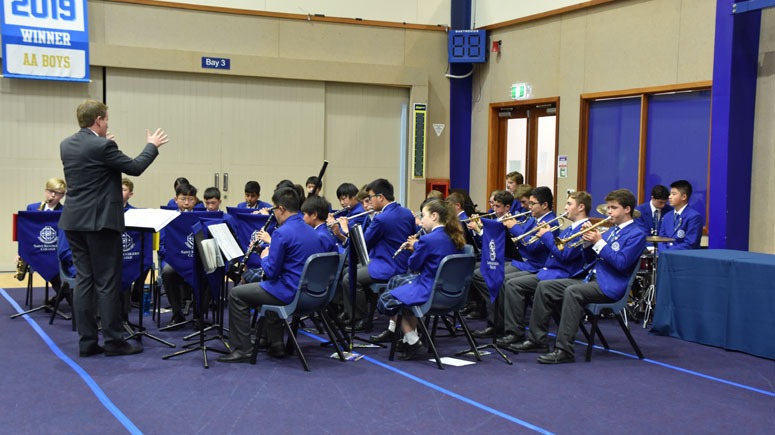 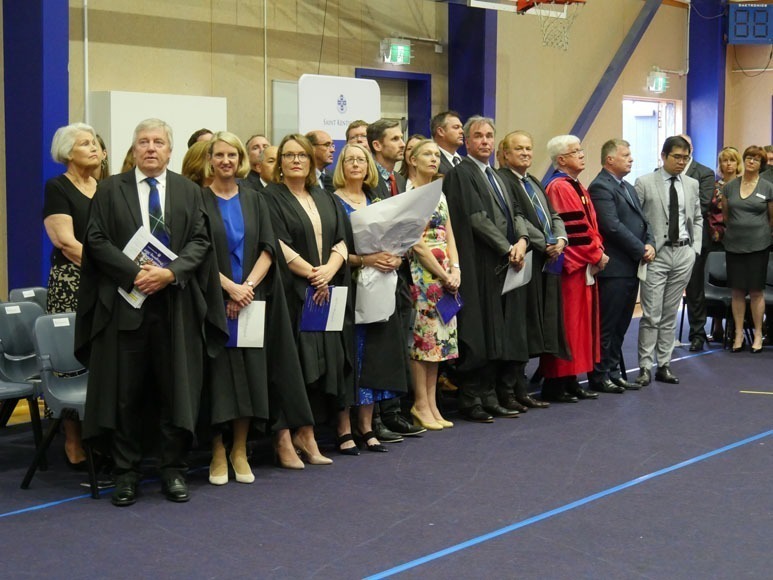 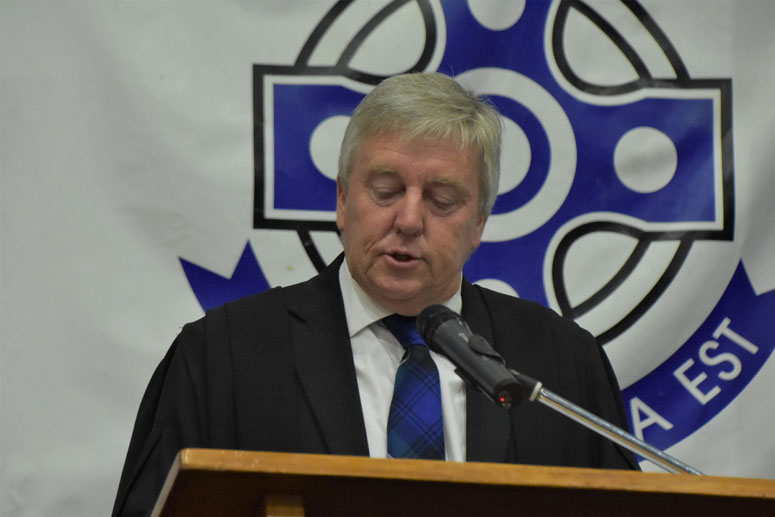 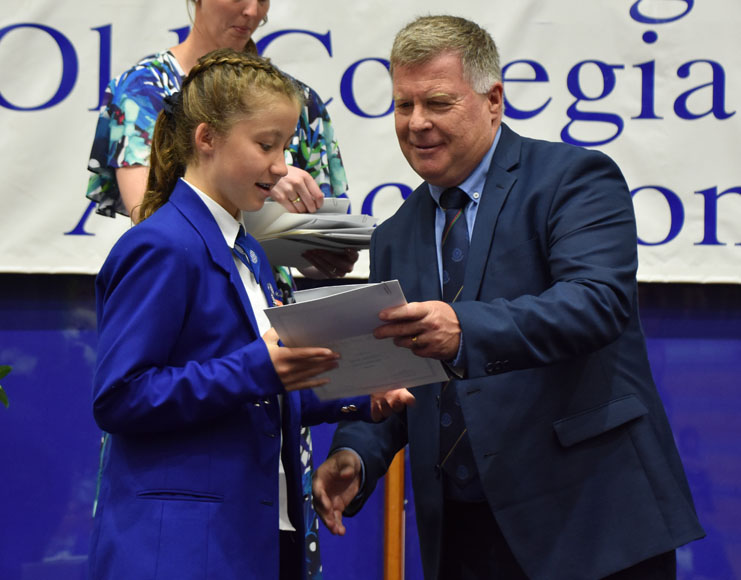 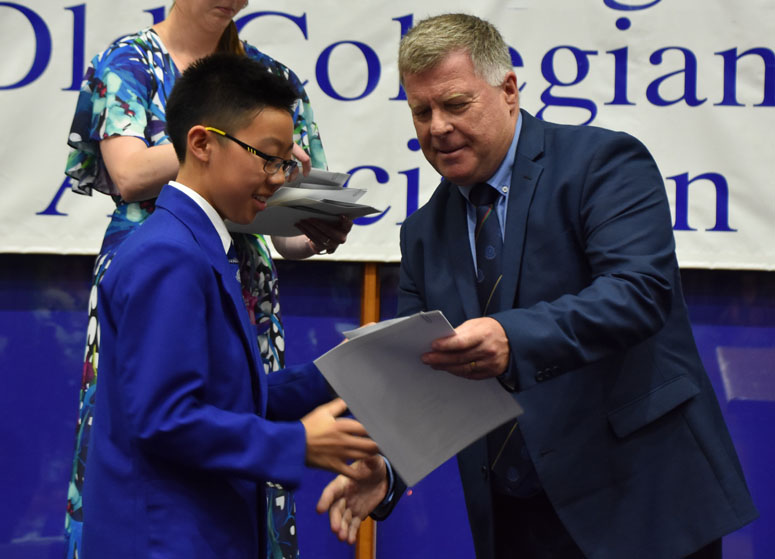 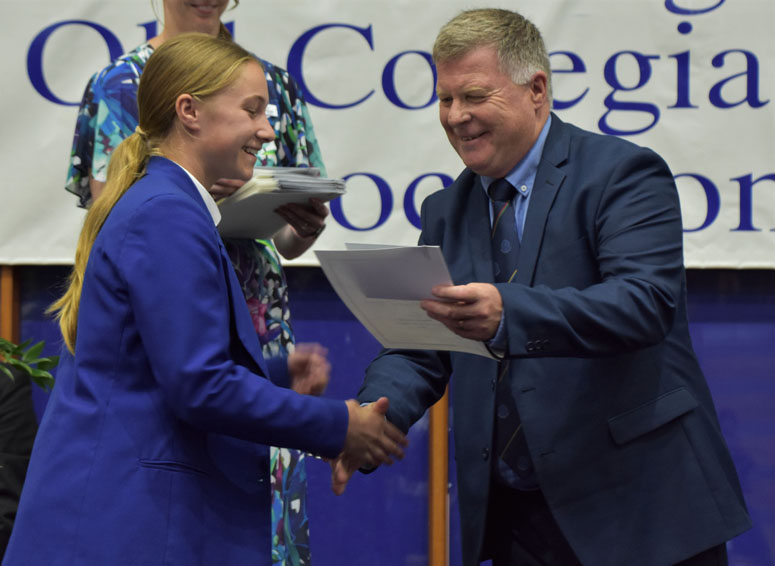 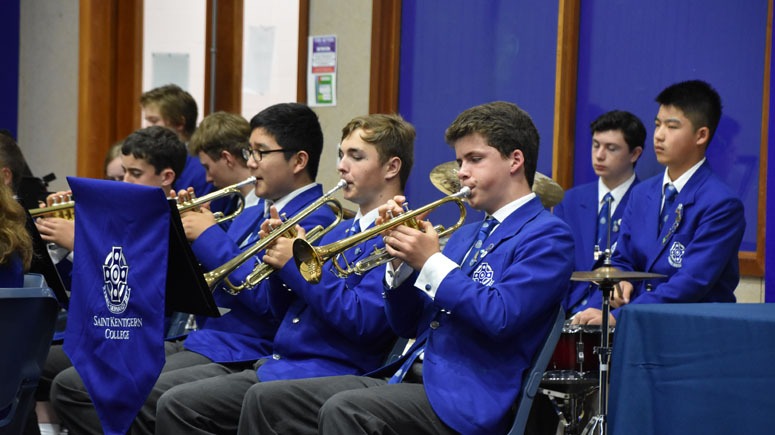 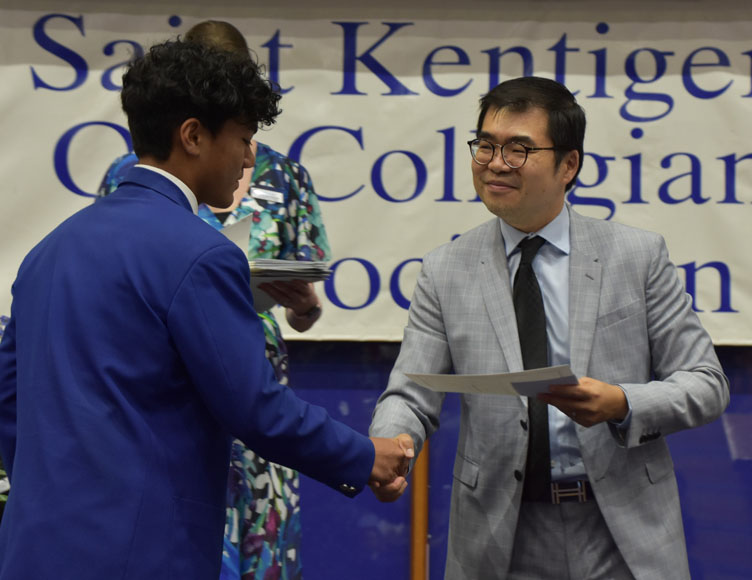 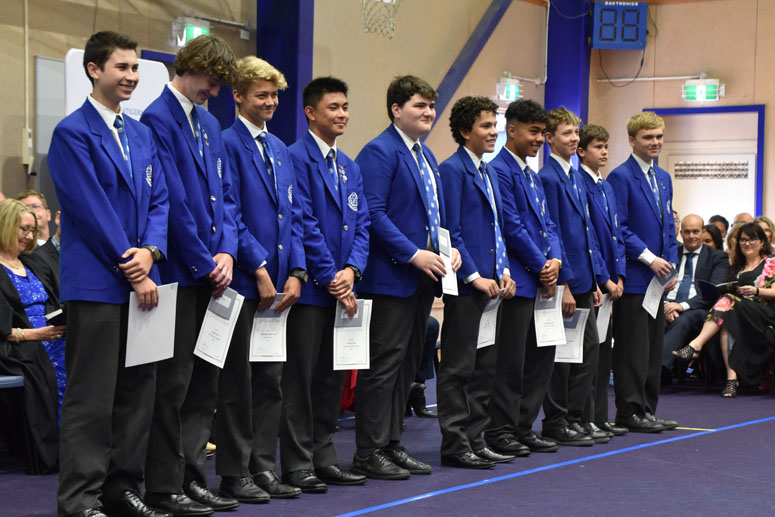 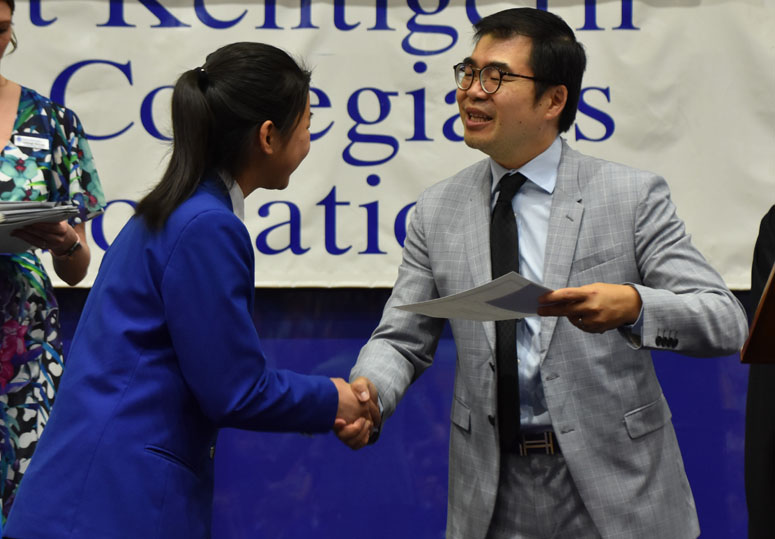 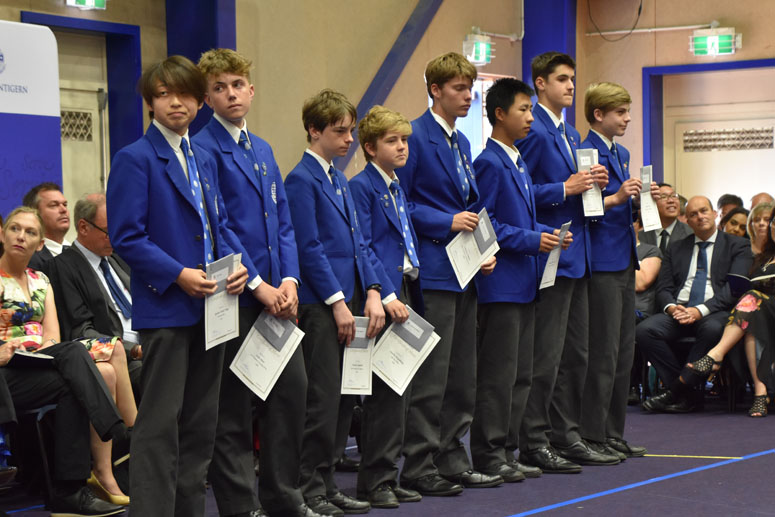 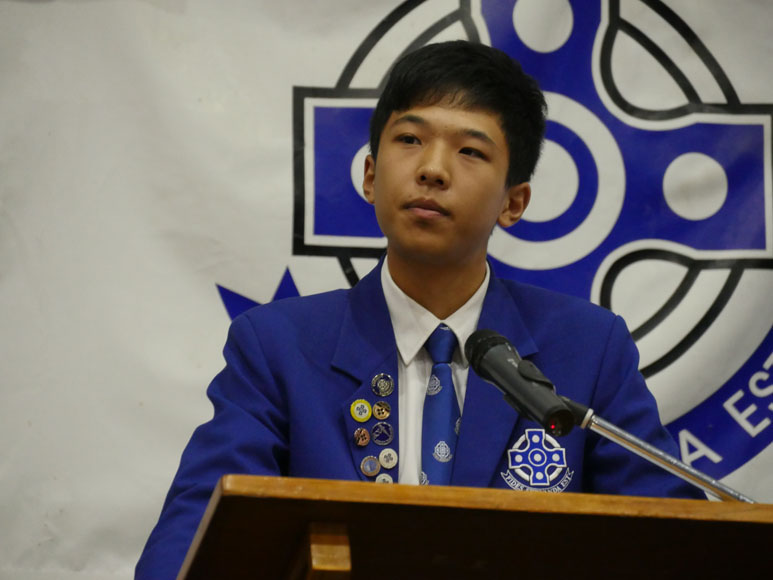 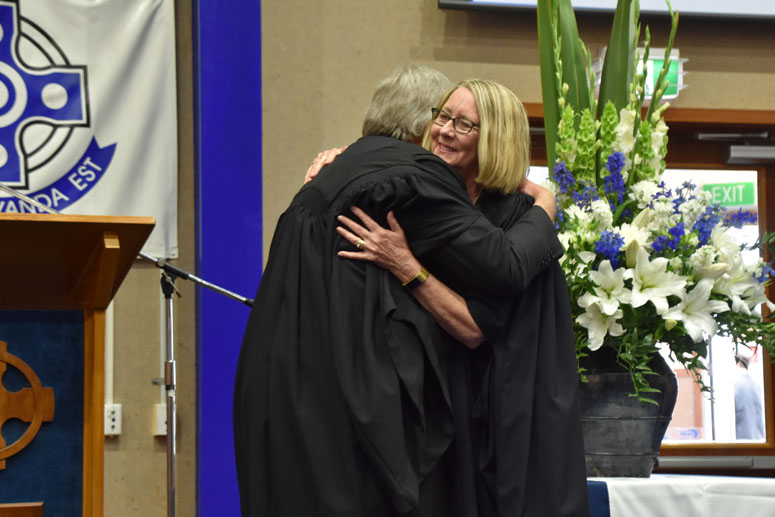