Based on one of Hans Christian Anderson’s most beloved stories, it’s hard to believe in 2018 that the story of The Little Mermaid who was willing to give up her life in the sea, so she could win the heart of a human prince, was actually written in 1837!

152 years later, in 1989, Disney released the enduring, animated film, with an irresistible sound track and stunning underwater visuals, to give the story new life. Now, almost 30 years on since the film was released and 181 years after the story was first published, Saint Kentigern Middle College has added its own unforgettable layer of magic to the timeless classic!

Year 10 student, Chloe Haerewa was cast in the coveted role of the determined little mermaid, Ariel. In her time at the College, Chloe has proved herself over and over to have a strong stage presence and a superb vocal range. She channelled just the right mix of charm, head-strong stubbornness and vulnerability into the part, making her a superb selection for the title role.

The story is familiar. On her 15th birthday, like her five sisters before her, Ariel swims to the surface for a glimpse of the world above. As she yearns for a life on land, sea-faring Prince Eric hears her sing from afar and is captivated by her voice. Sam Everitt (Year 10) is also well-known to Saint Kentigern audiences having played Peter Pan in last year’s Middle College production.  A year on and Sam’s voice has further matured, making him an equally strong selection for this key part.

Transporting the musical to the stage created many opportunities for supporting characters to shine, like Ariel’s loyal companion, Flounder, the rambunctious fish (Arwyn Stevens, Year 9) and Sebastian, the music-conducting Jamaican crab, brought to life with great humour by Josh Rose (Year 9), as he reluctantly assists his head-strong, young charge in her pursuit of Prince Eric!  Alongside Sebastian, Jack Webber (Year 10) provided comic relief as Scuttle, the know-it-all seagull with a just bit of attitude!

As ruler beneath the sea, King Triton (Daniel Short, Year 10), tried in vain to keep his wayward daughter away from the humans he so fears. Whilst Daniel played the caring father well, he also mastered the role of the explosive solo-father venting his frustration!

From deep below, the sea witch, Ursula, emerged, flanked by her eely henchmen, Flotsam (Emma Canton, Year 9) and Jetsam (Lucy Lyons, Year 10). Year 9 student, Melody Lui-Webster does a superb job as the larger-than-life, malevolent, calculating and betentacled villainess who rues the day she lost control of the kingdom to her brother, Triton. Waiting to take revenge, she seizes on Ariel’s desire to be human, creating a pact with the young mermaid to trade her beautiful voice for legs, for three days only, during which time she must win the prince or pay the consequence – relinquishing her soul forever to her wicked Aunt Ursula. To complicate matters, Prince Eric is seeking a bride and whilst his heart was captured by Ariel’s singing, he hasn’t seen her.  How can Ariel persuade Eric to kiss her and break the spell?

As a song contest unfolded at Prince Eric’s 21st birthday party, in his bid to find the ‘girl’ behind the voice, Chef Louis (Lucy Horsnell, Year 10), the diabolical palace cook, was busy in the kitchen trying to serve up Sebastian as the main course! Meanwhile Grimsby (Jonathan McCabe, Year 9), Eric’s slightly stuffy, faithful servant is charmed by Ariel and the course to marriage is set.

Ursula doesn’t keep to her word and captures Ariel, but distracted, Ariel smashes Ursula’s magic shell and in a moment the wicked witch vaporises. King Triton is free and now recognises where his daughter truly needs to be – on land with her one true love, Prince Eric. As the entire cast gathers on stage, they join in one rapturous final song, leaving the audience with the sense of a really ‘feel good’ show!

The costumes and makeup were beautiful! In particular, the costume worn by Sea Witch Ursula, with its undulating tentacles hiding the dancers beneath was masterful! The choreography was superb, backing up many of the scenes with delightful action, and the young orchestra was faultless. The large cast, musicians and crew clearly had an absolute ball bringing the show together! The audience had an absolute ball watching it!

Our thanks:
Our thanks to staff who, along with the students, spent countless hours to bring this production to the stage. Produced by Head of Performing Arts, Ms Jane Horder and Mrs Kim Smith, the roles of Director, Musical Director and Choreographer were taken on by three Old Collegians, Mr Ashton Brown, Mr Oliver Gilmour and Ms Morgan Heron, who were all actively involved in the Performing Arts whilst at College. Along with Technical Designer, Mr Glen Mortensen, a host of other staff took on roles in costuming, hair and makeup, backstage and front of house. We thank them sincerely for bringing out the very best in our students. 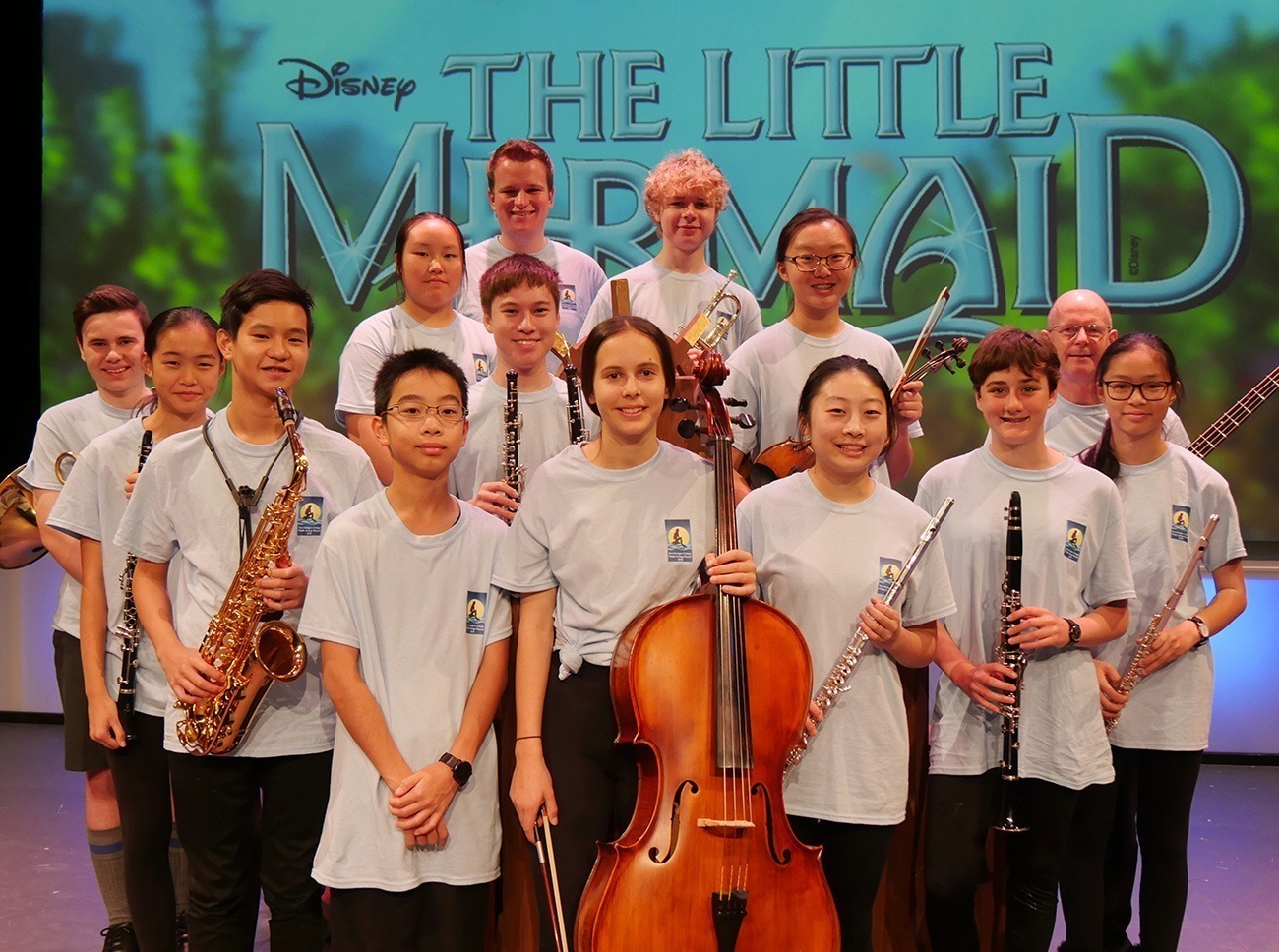 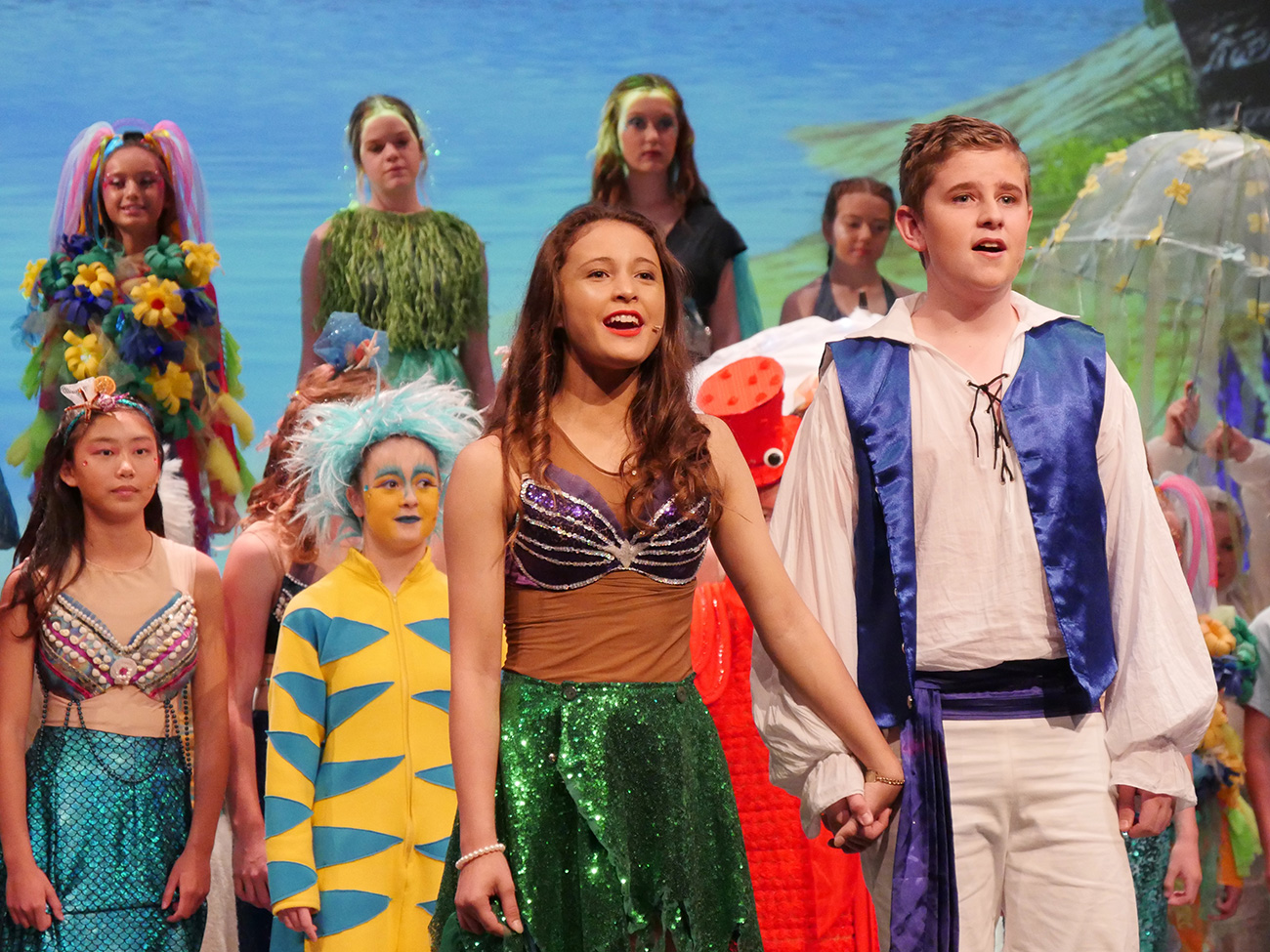 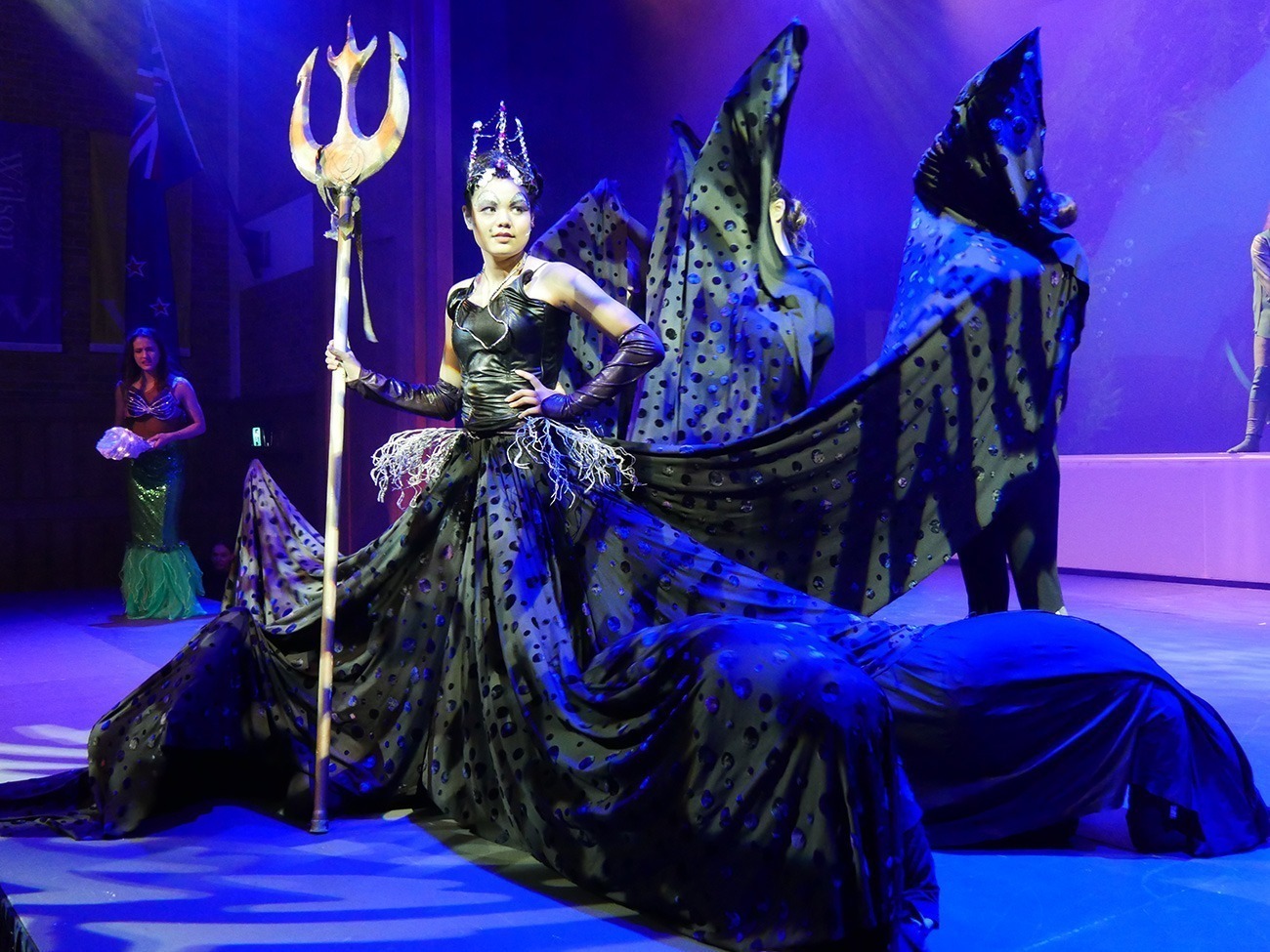 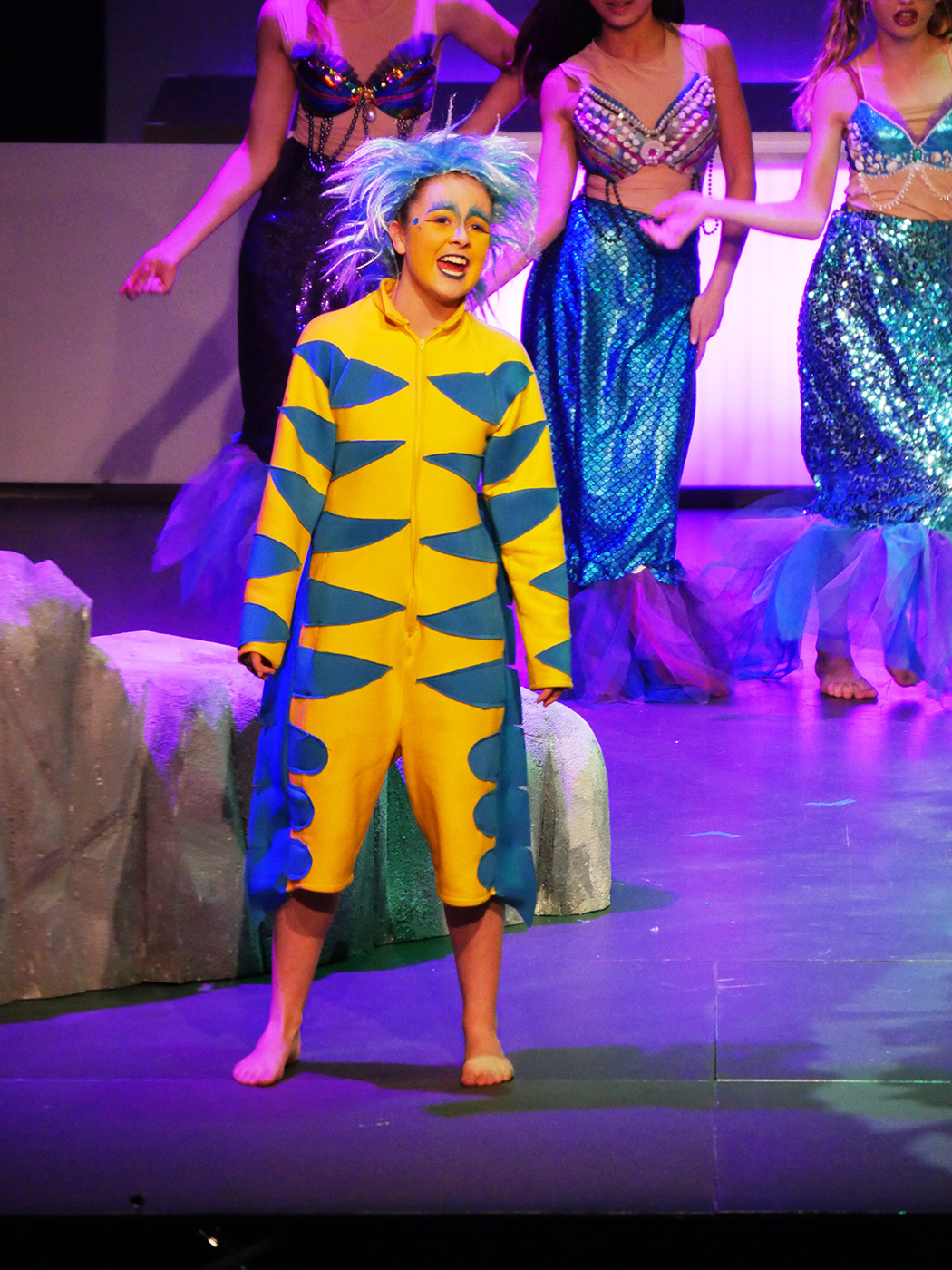 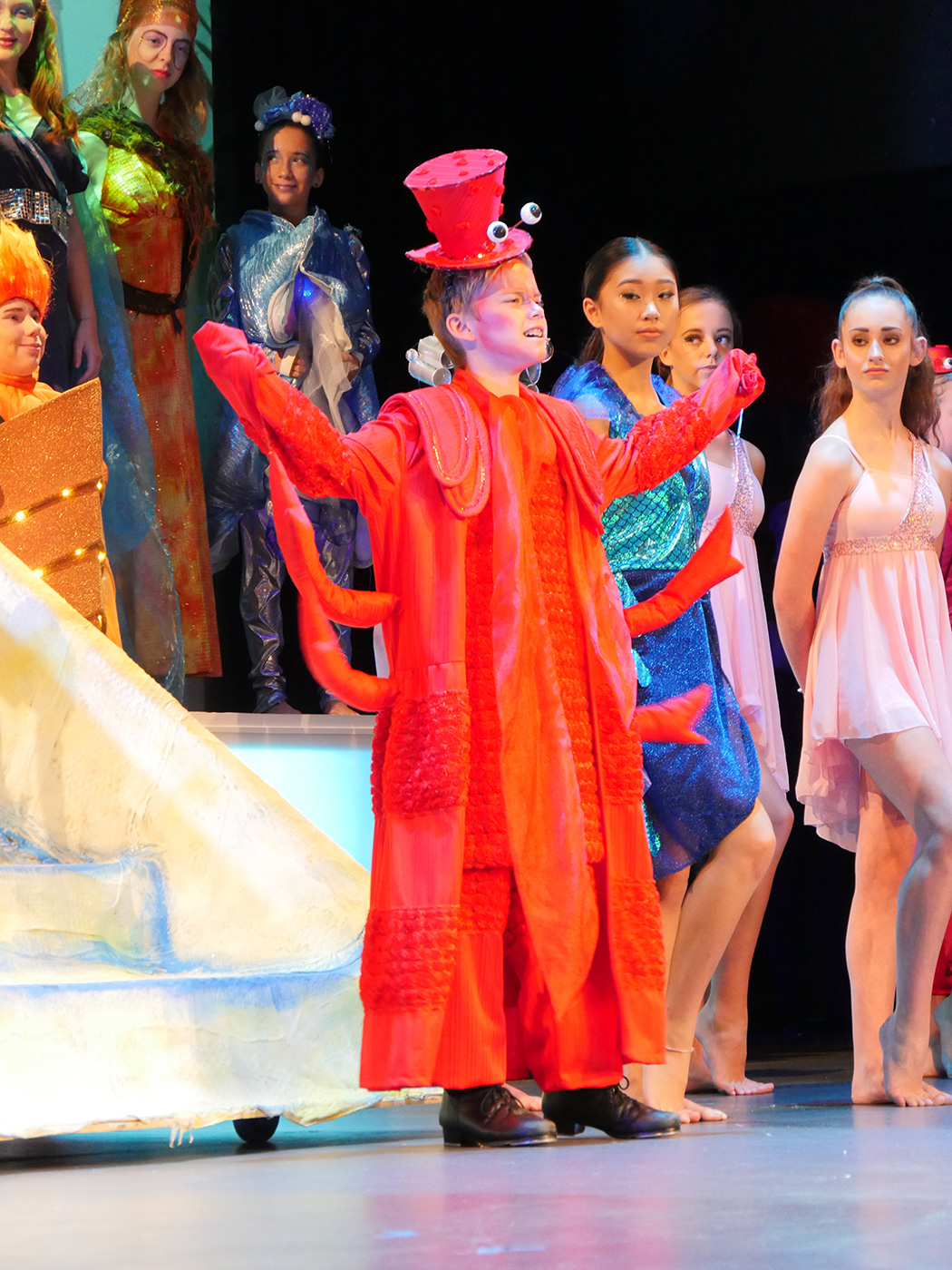