Last Night at the Proms

It’s five years since the College staged a ‘Last Night of the Proms’ but the wait for Saturday night’s fantastic concert was worth it - definitely an evening to remember!

First staged in London 120 years ago, the ‘Proms’ has a long history. In those early days, concerts were expensive to attend and most people were only able to hear good music when they went for walks in the London parks. Orchestras and bands played in bandstands and most of the music was popular and easy to listen to. Known as Promenade Concerts, people could enjoy the music while they walked about.

The first official Proms concert was the brainchild of Robert Newman, manager of the newly built Queen's Hall in London. His aim was to reach a wider audience than usual by offering more popular programmes, and making standing room available in the concert hall to keep prices low but with seats available for those who could afford it. Over more than a century, this winning formula has gained traction in London, with the number of concerts increasing each season and tickets to the Last Night increasingly hard to come by. One thing, however, has remained unchanged; the aim to present the widest possible range of music, performed to the highest standards, to large audiences and to give up and coming young musicians a chance to perform.

Whilst our Saint Kentigern ‘promenaders’ did not have to sleep on the streets to ensure a place, ticket sales were nevertheless brisk! The 500 strong audience came ready for an evening of great music and were soon decked out in Union Jack hats, handed flags to wave and given streamers to keep at the ready. A brave few went all out and are to be applauded for arriving in some stunningly ‘British’ outfits – who knew you could fashion a frock from a couple of Union Jacks from the $2 Shop!

This was the third and final concert in our own Proms series, following on from the Choir and Band Proms held over previous consecutive weekends. In true ‘Last Night’ style, the evening was informal and festive. Our concert goers also had a choice of seating – upstairs on the mezzanine or downstairs at tables with food and wine included.

First on the bill was Auckland trombone octet, Aucktet, who set the relaxed tone with some popular pieces including ‘Star Wars’ and ’76 Trombones.’ They were followed by this year’s Saint Kentigern Solo Music competition winner, Daniel Ng on the tenor sax whose performance of ‘East Coast Mainline’ was even stronger than his competition entry. Part of his prize was to have the chance to play solo at this concert. A fantastic effort, well done Daniel!

Following the interval, the Chamber Orchestra presented the six part ‘Capriol Suite’ before the Symphony Orchestra returned to play extracts from the ‘Pirates of the Caribbean.’

The major attraction of each Last Night of the Proms is always the traditional British pomp and ceremony saved for the end. With the Massed Choir, including staff members, and the Symphony Orchestra on stage, and the audience up on the their feet waving their flags and stamping in appreciation, the final section got underway in a mass of colour – it was hard not to miss the portrait of Queen Elizabeth on the cover of every chorister’s songbook! Talented singers, Lili Taylor and Sid Chand took the solo spots in ‘I Vow to Thee My Country’ giving brilliant renditions, before the Massed Choir followed with ‘Jerusalem,’ the ‘Hallelujah Chorus’ and finally ‘Land of Hope and Glory.’ By the time the final song was sung for the second time, the audience was in fine form joining the singing, bobbing up and down, as is tradition, and letting the streamers fly!

This was a fantastic evening of relaxed entertainment with a chance to socialise. Our thanks to Head of Music, Mr Ross Gerritsen and his team of music staff for bringing this together. Our thanks also to Mr Gerritsen’s parents, Tony and Jill Gerritsen for preparing the food and to the many members of staff who stepped in to help throughout the evening. 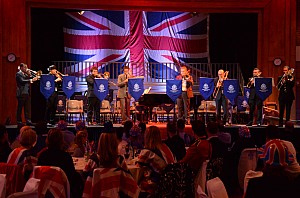 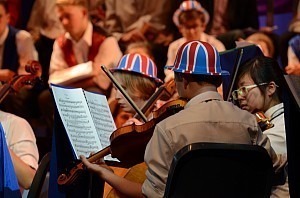 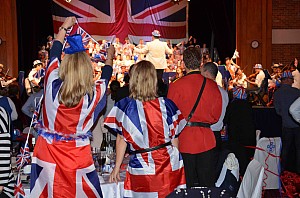 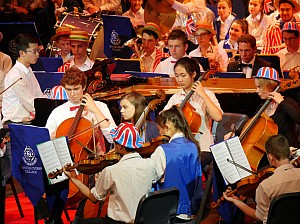 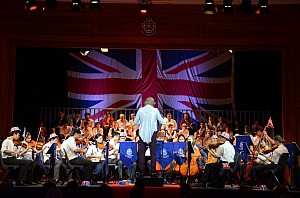 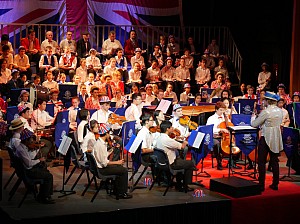 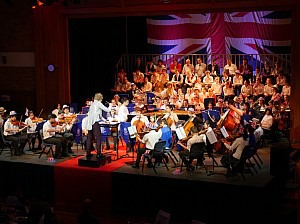