The success of some of New Zealand's finest young scholars was celebrated at the annual International Baccalaureate (IB) Diploma Top Scholars' Awards Ceremony held at Kristen School on Saturday 3 February with proud families in attendance. The students eceived their awards from The Rt Hon Sir John Key and the keynote address was given by Saint Kentigern Old Collegian  Tessa Meyer.

To achieve the title of an IB Top Scholar, graduates must achieve a score of at least 40 points out of a possible 45 in their final examinations. Four Saint Kentigern students were among those who were presented with an award at Saturday’s ceremony in recognition of their exceptional personal achievement: Tate McGregor (41 points), Laura K Smith (41 points), Chris Lee (41 points) and Josh Looker (40 points). (See below for an explanation of the point system.)

In honouring the students, Sir John said that gaining 40+ points was a phenomenal achievement which benchmarked the students against the highest achieving students in New Zealand, and also, importantly, against students internationally.  He encouraged the students to make the most of every opportunity offered to them and to become ambassadors for New Zealand in which ever field they chose to enter.  He said that in his view that there are three key ingredients to success.  These are luck, intelligence and attitude.  Although the IB cannot help with the first ingredient, it can assist students develop the latter two.

The keynote address was delivered by Saint Kentigern Old Collegian Tessa Meyer, the former head girl who graduated with the IB class of 2011.  Throughout her time at Saint Kentigern  she favoured artistic pursuits, with one of her artworks being displayed in the MacFarlan Centre.  However, the broad nature of the IB Diploma Programme ensured that Tessa continued studies in both Science and Mathematics, these subjects were invaluable to her when she decided to read Environmental Science and Geography at university before going onto to complete her Masters degree.  Tessa’s Masters thesis on community resilience was inspired by the CAS programme she followed as an IB student.  She believes that the IB Diploma Programme equipped her with the knowledge, awareness and confidence to succeed at university and beyond to her work with Panuku Development Auckland.

Our congratulations to Tate, Laura, Chris and Josh on their -wonderful achievement and we wish them well as they begin their tertiary studies both abroad and in New Zealand.

Explanation of the IB Diploma Points
The point scale used for IB subjects is 1 (poor) to 7 (best).  Students take six subjects = 42 points. A further 3 additional points* are available based on individual performance in the Extended Essay and Theory of Knowledge. Therefore, the maximum available score is 45.

*Additional points: A maximum of 3 extra points can be gained for successful completion of the Theory of Knowledge course and the Extended Essay but to be eligible for the diploma, students must also meet the requirements of Creativity, Action and Service (CAS). 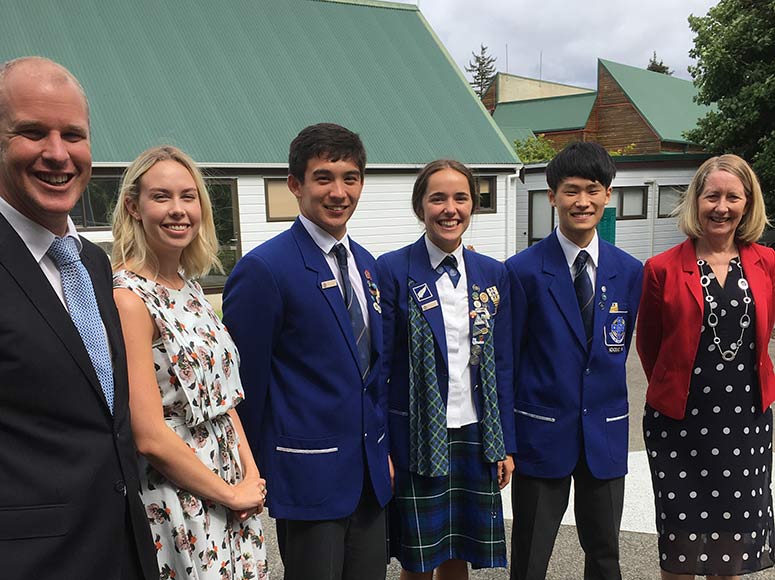