To achieve the title of an IB Top Scholar, graduates must achieve a score of at least 40 points out of a possible 45 in their final examinations; a feat achieved by only 7% of the world’s IB students, 16% of New Zealand candidates and 25% of Saint Kentigern students in 2016.

Seven Saint Kentigern students were among those who were presented with an award at last night’s ceremony in recognition of their exceptional personal achievement: Kevin Shen (43 points), Lanlie Zheng (42 points), James Hansen (42 points), Has Brooke (41 points), Cameron Low (41), Henry Mellsop (40 points) and John Won (40 points).
(See below for an explanation of the point system.)

The average student score for Saint Kentigern College was 36 points which compared very favourably against the world average of 29.2 points and 33.6 points for the rest of New Zealand.

In honouring the students last night, the Governor-General, the Rt Hon Dame Patsy Reddy, said that it was a privilege to be involved in celebrating the achievements of some of New Zealand’s top achieving students. She praised the International Baccalaureate for its academic rigour but more importantly for its guiding principles, which promote internationalism, tolerance and the IB Learner profile.

Chair of the NZ IB Heads’ Association New Zealand, Mr Tim Oughton said, ‘The reason that the IB diploma is so highly regarded around the world is that to attain it, young people must not only be excellent scholars, they must also have embraced a shared global philosophy.’ He continued to say that the scholars present had ‘not only excelled at the highest level of academic endeavour but they are also ambassadors for a more positive future.’

Our congratulations to Kevin, Lanlie, James, Has, Cameron, Henry and John on their fantastic achievement and we wish them well as they begin their tertiary studies in New Zealand, Australia, the USA and the UK.

EXPLANATION OF THE IB DIPLOMA POINTS
The point scale used for IB subjects is 1 (poor) to 7 (best).  Students take six subjects = 42 points. A further 3 additional points* are available based on individual performance in the Extended Essay and Theory of Knowledge. Therefore, the maximum available score is 45.

*Additional points: A maximum of 3 extra points can be gained for successful completion of the Theory of Knowledge course and the Extended Essay but to be eligible for the diploma, students must also meet the requirements of Creativity, Action and Service. 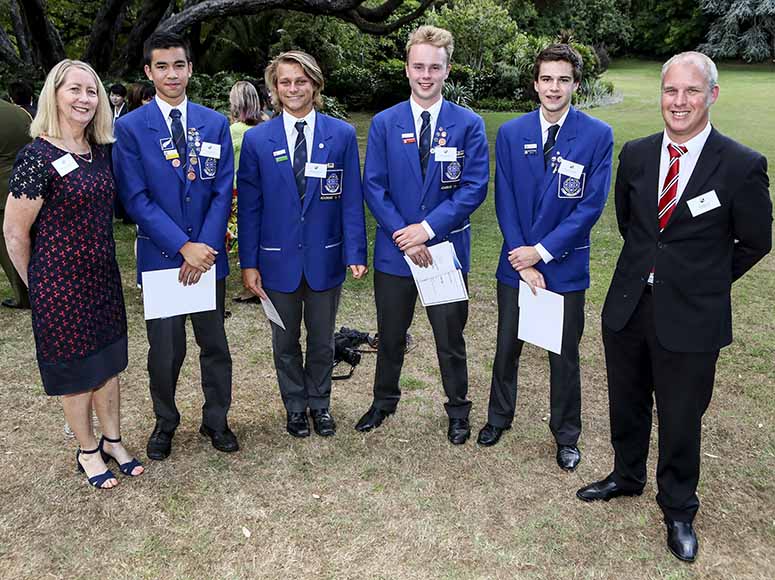