Russell McVeagh is the most prestigious debating tournament of the year, it is fair to say that it is the equivalent of the 1A competition for the 1st XV but for debating. Similar to 1A, and the reason it is so important, is that throughout the tournament, selectors are looking to pick teams to represent Auckland at debating nationals in May. Over the weekend of 28th-29th March, Saint Kentigern College sent three teams to compete at the annual Russell McVeagh Auckland Debating Regional Championship held at Auckland Grammar School.

After the initial preliminary stages of the tournament, SKC1 (Becky Lane, Rachel Worthington, Keshini Kestheeswaran) was the only team left unbeaten and were top of the table. SKC2 (Sarah Courtney, Josh Looker, Oscar Simms) placed third with three out of four wins. In the history of the tournament, this is the highest ever placing by a school's "second" team after the first day of debates. This allowed both teams to progress to the second day of the tournament which was structured as an eight team single elimination bracket.

In the quarterfinals SKC1 defeated Kings 2 while SKC2 won a hard fought battle against Macleans 1. In the semifinals SKC1 defeated Westlake 1 while SKC2 defeated Lynfield both with 2-1 split decisions. This lined up an all Saint Kentigern final. The significance of this achievement cannot be undersold. This is the first time in the tournaments illustrious history that one school has had two teams in the Grand Final. It would be the equivalent of the 1st and 2nd XV making the final of 1A. Truly a groundbreaking achievement. In the grand final the teams debated over whether women should have places reserved for them in science, technology, engineering and mathematics at university with SKC2 affirming and SKC1 negating the motion. After an incredibly high quality debate, SKC1 emerged victorious and successfully defended their title from last year. This in itself is significant as it is the first time since 1999 that a school has managed to defend a Russell McVeagh title.

After winning the tournament, a few speakers were singled out for their incredible performance over the weekend. Josh Looker (Yr 11, SKC2) was named 'Most Promising Speaker' of the tournament; an award reserved for a speaker that is not year 13 who the adjudication team thinks shows incredible promise. This award is generally presented to a year 12 student, but Josh has won this as a year 11 student which bodes well for his future as a debater. Rachel Worthington and Becky Lane were named as members of the Auckland Regional Squad which represents the highest level of achievement possible for a student at the tournament.

Jesse Hart was the head coach of both SKC1 and SKC2 and was capably assisted by Old Collegian Arun Prakash (who was a member of the New Zealand team last year). The debating program is overseen and run by Mr Chris Hodder. 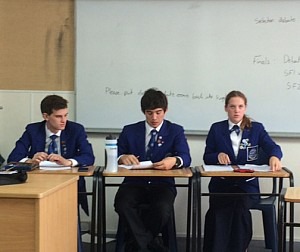 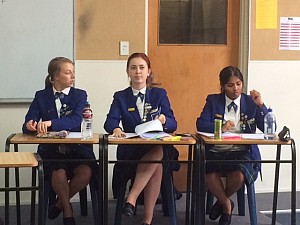 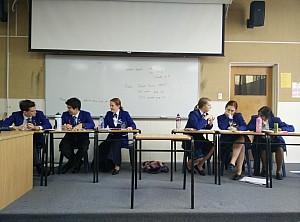 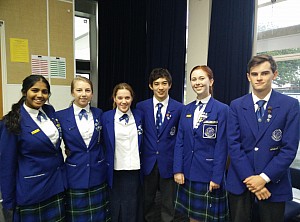