In a first for the Girls’ School, training is now underway to prepare a team for the annual Auckland East Rotary Club Soap Box Derby to be held at Stonefields Avenue in Mt Wellington in March. This competition will pit a team of young drivers from several local schools in a bid to become the fastest downhill racer on four wheels – no engine! The winner goes to a regional round with the ultimate goal a spot in the national final.

In the interests of fairness for all schools, the vehicle itself is purchased as a plain kitset with creative license for decoration. The girls think that they are likely to be the only all girls’ team entered and have passed up on go faster stripes and flaming wheels in favour of some tastefully placed frangipani!  This, however, by no means diminishes their intention to get past the line first and at a recent Sunday practice to pick a team, the speed demons were out in force!

Meeting on the steep drive of the Boys’ School (with the speed humps removed for the morning), the girls took it in turn to be pointed downhill and let gravity and wind shear determine the outcome. Crouched down behind the wheel, the girls were determined for a spot on the team. With one crash into the garden, the dads in attendance were kept busy with some running repairs.

This was a great morning for interaction between dads, their daughters and friends.  We are particularly grateful for the sponsorship from parents, Paul and Patsy Radisich (Aegis Oil), Mrs Hastie’s brother, Russell Kirkland (Marcus Motors) and Brad Mosen (Signwriting) to enable us to purchase the car. Our thanks to parent Warren Frazer for supervising the girls to construct the car and to Paul Radisich for offering his considerable racing driver expertise to train and manage the team.

After a morning of racing a team of four racers and a reserve were chosen along with a pit crew of three. The girls would like to offer their thanks to the fathers for their help and direction at training. Thanks are also offered to the teacher in charge, Mrs Deborah Laffoley and Mrs Sue Mosen for administrative help. 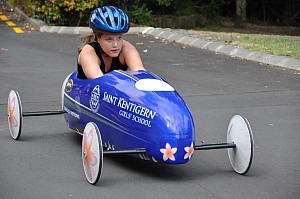 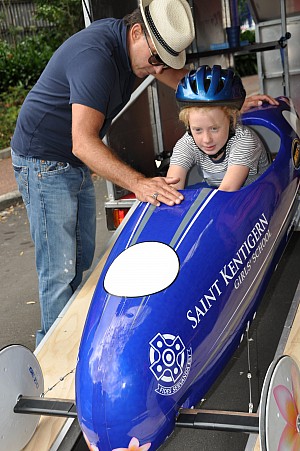 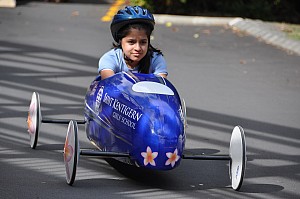 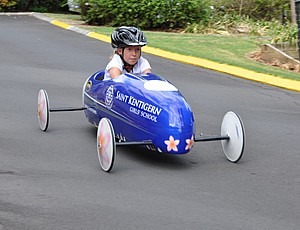