Victoria is our highest achieving student in Year 8 with an 89% average across all examinations. Victoria a quiet young woman with many talents evident in a variety of areas. She has strived to achieve academically but she is also an accomplished musician and sportswoman. Her record of scholarship has been impressive, receiving academic honours in 2011 and 2012. She has also been a key member of our orchestra; playing solo on the clarinet.

Anna has collected a number of academic awards including a High Distinction in ICAS English and academic honours in both Year 7 and Year 8. Anna is also an avid reader and had set herself a goal this year to read 100 books and to date she has managed to read 93. Added to her academic prowess is her talent as a musician. Anna plays both the violin and the viola, is a key member of our orchestra and has been a member of the APPA orchestra this year.

Sportswoman of the Year: Chelsea Simmons

Chelsea was the year group and senior champion in swimming, placed 2nd in cross country and was  the year group champion and senior champion in athletics. Competing at the College Athletics at the beginning of the year Chelsea was placed 2nd in 400m and 200m, 3rd in long jump and high jump and 1st in shotput. Chelsea took part in sport at the College and was selected for the top touch rugby team, the top Year 7 netball team and she won Most Valuable Player. Chelsea was also selected for the top Water Polo team and represented the school at the AIMS tournament in Water Polo and swimming.

With a growing roll, the hall at the Girls’ School is now too small for to accommodate all our families at a whole school event such as prize giving so this year, the awards were held in the JC Chalmers Hall at the Boys’ School on a beautiful evening to herald the start of summer. This was an evening to celebrate those who had achieved their personal best to become prize winners for 2012.

In the opening address, Chairman of the Board, Dr Bruce Goodfellow commended the Girls’ School for a year of pleasing progress with a roll that is steadily growing and he encouraged the girls to continue to avail themselves of as many opportunities as possible.

Principal, Mrs Sandra Hastie chose an informal exchange directed at the girls rather than a formal speech for the occasion. She told them the tale of an eagle raised by chickens. They laughed at him when he said he wanted to learn to fly; he believed he could never be more than a chicken, that he could never soar on high. Mrs Hastie told the girls that the moral of her story was that you become what you believe you are,  so if you have dreams to fly like an eagle, and achieve great things and make a difference then follow your dreams – don’t let them be taken away by the words of others, believe in  yourself, be willing to take the risk to stretch your wings and fly to become the person that you were created to be.

During the evening, the formalities were interspersed with an item by the orchestra, playing Andante from the Trumpet Concerto by Haydn with Victoria Tse playing a clarinet solo. Later in the evening, Anna Elisara played the first movement from the Mozart 40 Symphony in G minor. Talented drama student, Irena Beddington-Behrens also entertained, presenting her Grade 3 Speech exam piece, a monologue from Jill Murphy’s Worst Witch.

The Junior and Middle School academic awards were presented by former Principal of the Boys’ School, Mr Geoff Burgess and the Senior awards by Mrs Suzanne Winthrop, Deputy Principal at the College. The cultural and sports awards were presented by Mrs Mary Ann Goodfellow, the wife of the Chairman of the Trust Board, Dr Bruce Goodfellow. We are grateful to them for giving of their time so freely.

The Gillian Eadie Entrepreneur of the Year Award recognises initiative and entrepreneurial skills. In an unusual twist this year,  an entire class stepped forward to receive the award! Year 2 started the year by setting up a worm farm and in Term 4, brought their business skills to the fore to raise $525 in the space of 30 minutes selling worm tea and castings at the school gates!

The Citizenship Cup is awarded to a student who understands the true meaning of service to others and embodies the school’s values, fully understanding the Saint Kentigern Way. This year, Year 7 student, Veiongo Kaho was the recipient of this award.

Before handing the leadership role to Anna Lowther, the elected Head Girl for 2013 and Natalya Trombitas, elected Deputy Head Girl, outgoing Head Girl, Anna Elisara gave her final speech. On behalf of the Year 8’s she said, ‘Although we leave this school for the last time tonight with reluctance, we are ready for the journey ahead thanks to the love, patience, encouragement and support from our teachers and peers.’ In her parting words to the rest of the School. She said, ‘Most importantly, remember that it is not what you are, but who you are that matters. You will always be Daughters of Kentigern.’ 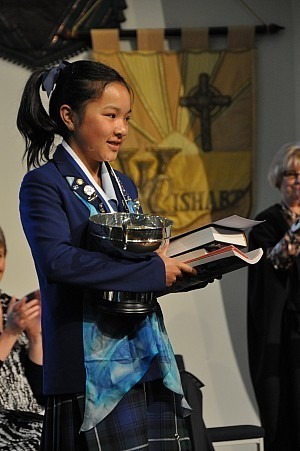 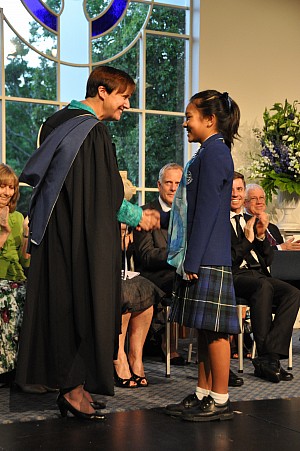 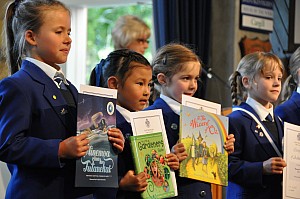 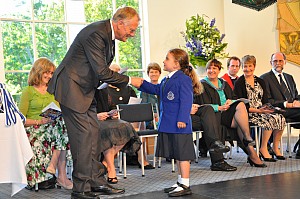 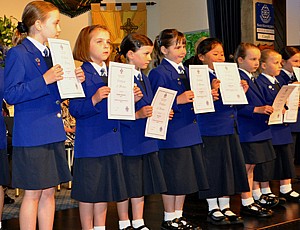