The Graduation Dinner marks the formal end to the Year 8 girls’ primary schooling as they prepare to move on to college; the next stage in their education. Excited girls, wearing their graduation scarf, along with their parents, staff and invited guests, gathered at Sorrento in Cornwall Park to celebrate with the girls and reflect on their time at the School. Once again, the Parents and Friends Association had done a superb job decorating the room prior to dinner, setting the scene for a wonderful, family evening. This was a chance for both parents and the girls to socialise and to take the time to say farewell to their teachers.

The dinner is sponsored by the Old Collegians and this year, President of the Old Collegians, Mr Andrew Morgan introduced Mrs Jessie Jarvie (nee Emerson), the first Saint Kentigern Head Girl, to speak. Jessie gave a powerful, thought-provoking speech in her signature bubbly, warm-hearted way. She told the girls that we live in a world where ‘it’s often implied that one of anything is not enough.’ We always seem to want more. She gave the girls a list of ‘useful ones,’ where ‘one only’ would be plenty enough. 1. There is only one you 2. One definable moment can make a difference. 3. You have only one family. 4. Find one true passion. 5. Make one new connection. In finishing she said that connections are the way of the future, and that a network such as the Old Collegians will be their connection to Saint Kentigern for years to come.

Sharnika Leleni, the graduating Head Girl at the College also attended the dinner and like Jessie before her, spoke of the pride that she has as a ‘daughter of Kentigern.’ She told the girls that each in their own way had left their special mark on the School and that this is a watershed time to think about the things they have accomplished so far, and to think about what they want to achieve next.

During the course of the evening, the girls mixed, mingled and giggled, seeking autographs on what has become the traditional white and blue Graduation Bear. Principal, Dr Sandra Hastie told the girls that in the years to come, the bear, a symbol of caring and unconditional love, will serve to remind them of their younger years.

Following the main course, we welcomed the guest speaker, Her Honour Justice Patricia Courtney. Justice Courtney is a judge who was appointed to the High Court in 2004, where she presides over cases of all kinds. She is also, equally importantly, a mother to two Saint Kentigern girls, Rachel and Sarah. Principal, Dr Sandra Hastie particularly asked Justice Courtney to speak as not many women have risen to her role in the justice system. Of New Zealand’s 36 High Court Judges, only 9 are women. Justice Courtney explained the hard work involved in following law and the determination required to succeed. She confided that she had been nervous and had some self-doubt when initially offered the role but was given sage advice by a retiring judge, ‘Don’t think about what you don’t know, think about what you do know.’ She told the girls that generally, the things we do know will help us work out the answers to the things we don’t know – and that they should have confidence and make the most of their talents. Girls can do anything, even rise through the ranks of traditionally male-dominated workplaces!

Head Girl, Anna Lowther, spoke confidently on behalf of the Year 8 students to offer her thanks to the staff who have helped them on their way. The Year 8 girls presented Dr Hastie with a fabulous clay wall hanging of the Iona Cross that they had crafted themselves.

In the final address of the evening, Dr Hastie said, ‘You hold the key to your own futures. There is a lot of power inside you waiting to be unleashed and the only person stopping you from being all that you can be is yourself. Have fun, dig deep, stretch and dream big.  Know though that things worth doing seldom come easy but with an idea, determination and the right tools – you can do great things. Let your instincts, your intellect and your heart guide you.’ 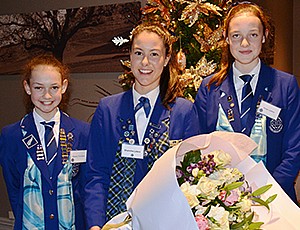 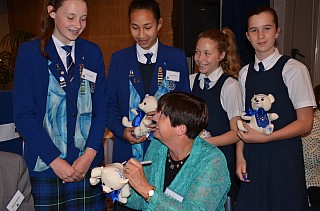 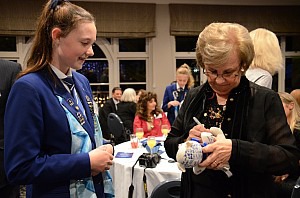 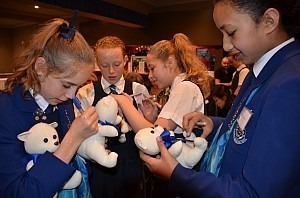 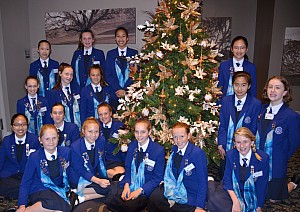 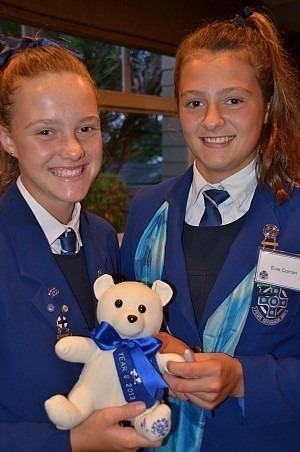