The College Pipes and Drums, an accomplished Highland dancer, splashes of tartan and a pot of porridge oats were all the right ingredients to bring a slice of Scotland to the Girls' School campus for Flora MacDonald Day. Now in its third year, this day to celebrate our Scottish heritage, from a 'female perspective' is as highly anticipated by the older girls, as the Boys' School anticipation for their long-established Celtic Day. The girls now know to expect pageantry, formalities, a chance to learn some thing new, that there will be something homemade to eat and plenty of craft and physical activities to enjoy during the course of the day.

With many resplendent in kilts, tartan ties or sashes pinned in place with thistle brooches, the invited guests gathered in front of Corran House as the Pipe Band prepared to lead the march. A group of wee onlookers - preschoolers sporting tartan touches - lined the driveway curious to see what was underway. For some, the sudden, fulsome sound of the passing band proved just a little too much! The girls, however, were eager to follow on as the four Houses, split into to eight smaller clans, lined up behind their flag bearers and joined the march down the drive and back to the hall; the entry flanked by the Pipes and Drums.

Dr Sandra Hastie got the morning underway, re-telling the tale of the woman so highly revered in Scotland; the brave Flora MacDonald who at the age of 23 risked her life to 'smuggle' Prince Charles Edward Stewart, better known as Bonnie Prince Charlie or the Young Pretender, over the sea to the Isle of Skye, as made famous famous in the Skye Boat Song. As a claimant to the British throne, Charles was determined to take the Royal throne of England but his army was brutally defeated by the Royal Troops of George II at the Battle of Culloden in 1746. Charles went into hiding with a bounty of £30,000 on his head and many Highlanders took great risks to keep his whereabouts hidden. It was Flora who took the ultimate risk to take Charles, disguised as her servant girl, by boat to Skye from where he escaped back to France. Flora was imprisoned in the Tower of London for a year and never saw Charles again. It is said that she was so highly respected for her bravery that on her death at the age of 68, between 2 - 3,000 people from all over the Highlands came to pay their respects. It was on account of her courage, that Flora was chosen as a strong namesake for the Girls' School day of celebration.

A familiar figure at many of our Celtic events, Year 12 student from the College, nimble footed Sarah McQueen, once again demonstrated the precision required to perform the Sword Dance, accompanied by College piper, Andre Mason. Sarah is not only an accomplished dancer but also plays the bagpipes. Dr Hastie invited her forward for an interview. Sarah told the girls that she had enjoyed the challenge of learning the bagpipes and especially enjoyed the camaraderie of the group. She believes that despite the broad age range, they become such close friends because, as a band, they do so much together and are privileged to play in some amazing venues such as Eden Park last year. She is really looking forward to the band's trip to Scotland, the birthplace of Saint Kentigern, later this year. Dr Hastie also called on Andre to demonstrate the bagpipes and then threw the challenge out to the girls to take up the opportunity to learn.

With the formalities over, the guests were invited to the Drawing Room for a morning tea with shortbread, whilst the girls readied themselves for a day of activities; a day when the older girls take on a big sister role to the younger students mentoring them throughout the day.

Games out on the courts, dancing in the hall (joined by a gallant 'give it a go' Reverend Hardie!), craft activities with the much favoured 'bling', tartan bookmarks and a cooking session got underway. It was the latter that required a degree of stoicism by some of the girls. At the previous 'Flora' days, the campus smelt divine all day as the smell of cooking biscuits wafted from the kitchen. This year's choice was a little more pragmatic - something with a long history in Scottish culinary tradition - porridge! The staple, austerity diet of crofters, however, is not associated with a day of fun and so the choice of tasty toppings certainly made up for the surprise of eating a bowl of porridge - especially for those who had skimped on the cooking time and found themselves with a rather unexpected texture in their bowls!

If a mix of tradition and fun with Scottish overtones is the aim of the day, then this was most surely achieved. The smiles from students and staff alike said it all! 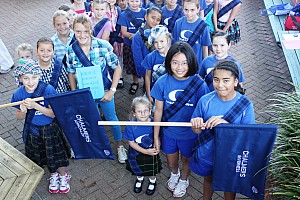 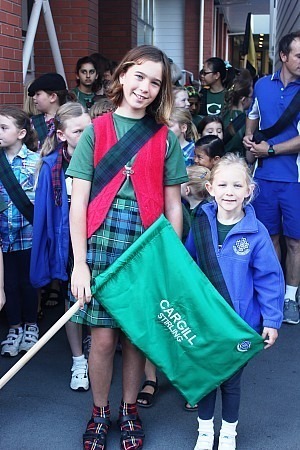 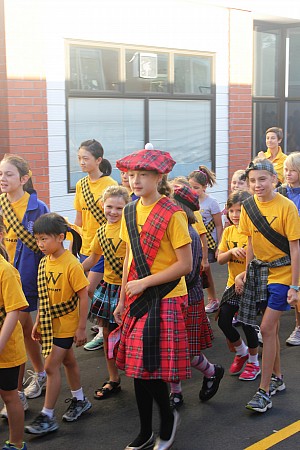 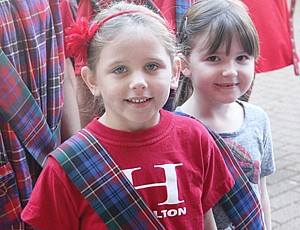 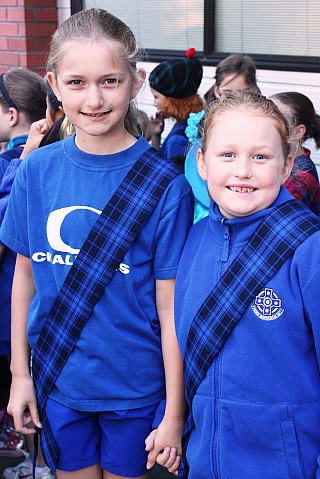