We are delighted to announce that Madelaine Freeland has been awarded 1st place at the Auckland APPA Champion of Champions Year 7 and 8 Speech Finals held at Royal Oak Primary School this week.

As the Remuera Zone winner, Madelaine competed against zone representatives from the other Auckland regions and the level of competition was high. She presented her winning school speech ‘Why Parents Can Get it Horribly Wrong’. She had the audience chuckling with her demonstration of the ‘Ugly Parent Syndrome’ and convinced us with her humorous descriptions of the ways parents give children mixed messages.

In what the adjudicators said was a unanimous decision, the judges were impressed with her wit, timing and ability to entertain. This is the second award Madelaine has won for her speechmaking this term, also having received the Sir Dove-Myer Robinson Memorial Trophy at the Remuera Lions Annual Speechmakers Competition last week. 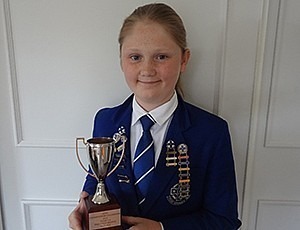