If happy laughter is a measure of a successful day, then this year’s Flora MacDonald Day at the Girls’ School certainly had the winning formula. There were smiles all around as the girls enjoyed the day set aside each year to celebrate our Scottish Heritage.

Founded to honour Saint Kentigern’s ancestry from a feminine perspective, the day is named after an 18th century Jacobite heroine who risked her life to smuggle Prince Charles Edward Stewart – ‘Bonnie Prince Charlie’ – from exile in Scotland over the sea to the Isle of Skye. It was on account of her bravery and strength of character that Flora was chosen as a strong namesake for the day of celebration.

No Saint Kentigern function would be complete without the skirl of the bagpipes! As the College Pipes and Drums prepared to lead the march, it was a delight to see a diminutive figure in the ranks. Kate Pennycuik was the first girl to take up the chanter at the Girls’ School, later progressing to a full set of pipes before moving on to the College for the start of this year. It was an inspiration to see her at ease with the older students and we’re sure she felt a huge sense of pride as she played for her former school mates.

As the Pipes and Drums headed off, the clans fell in behind with the older girls taking charge of the younger students for the day. Cargill, Chalmers, Hamilton and Wishart were further divided to eight smaller clans with each taking the name of a Scottish town: Kirkaldy, Inverness, Skye, Asgyll, Glasgow, Dundee, Roxburgh and Stirling. Tagging along behind were the wee girls from the Preschool!

Heading the march was Principal, Dr Sandra Hastie along with Head Girl, Moiralisa Ainu'u Aneru and Deputy Head Girl, Zara Smith. Two new ‘girls’ had also joined the ranks! Dr Hastie’s four legged friends, Meg and Skye were on parade, also dressed in Saint Kentigern kilts! Director of the Preschool, Mrs Sue Nash had quietly organised her mother to outfit the Shelties ready for the day. For those who remember Dr Hastie’s ‘Callum of Tux Wonder Dog infamy’ (he was caught on camera licking out the dishwasher!), rest assured, Meg and Skye were model canine citizens on the day!

The Pipes and Drums flanked the entrance way to the hall as the girls, staff and special guests filed in. The orchestra made its debut performance of the year, opening with Amazing Grace before Dr Hastie again told the tale of Flora MacDonald’s extra-ordinary bravery. She also explained the history of tartan for the girls to understand its significance in time and place. As Reverend Reuben Hardie finished leading us in prayer, the smell of shortbread began to fill the air, signalling morning tea was ready in the drawing room!

With the formalities over, the girls readied themselves for the day’s activities, with the older girls mentoring the younger ones at each stop. We are also grateful to the girl prefects from the College who came across to lend a hand and take on a big sister role. As the morning progressed, there were delicious wafts of sweetness from the kitchen as the girls worked in groups on oaty pancakes. Upstairs, salt dough thistles began to take shape.  A story of resilience emerged as another set of girls were guided through making pom pom spiders. First they were told the tale of King Robert the Bruce of Scotland who was defeated in battle. Disheartened, he thought about giving up the throne but legend tells, as he hid in a cave, he watched a spider building a web, continuing to persevere each time it failed. Robert realised that each time the spider encountered a problem, it didn’t give up, it picked itself up and started again until it succeeded – giving him the impetus to go back to his troops and successfully take back his throne.

Whilst Scottish country dancing kept the feet nimble and weaving tartan placemats kept the fingers nimble, it was the burst of intense activity out on the lawn that brought the biggest giggles of the day as the girls slipped and slid down the soapy water slide, bounced on the inflatable obstacle course and negotiated aqua-orbs on the pool.

Happy and tired, the girls unanimously declared that the day was, ‘So much fun!’ 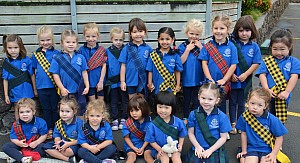 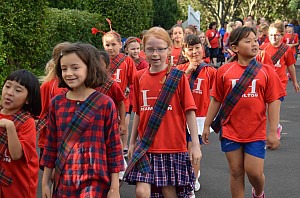 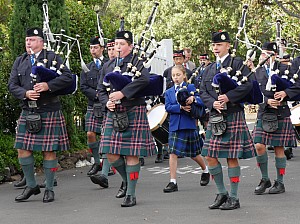 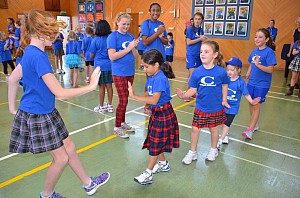 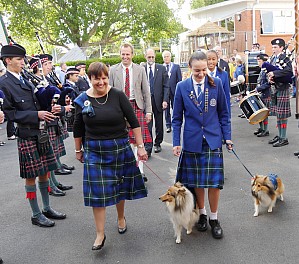 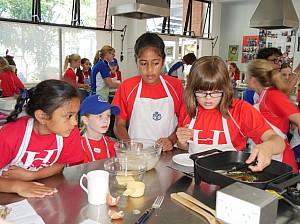 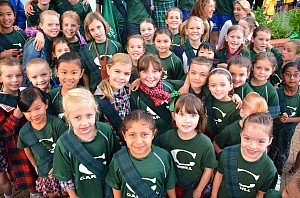