Congratulations to Girls’ School student Madelaine Freeland who has successfully won 1st place at the Lions Speechmakers competition for the second year in a row.

This now sees the Girls’ School take out the top prize for the third successive year with Georgia McLeish winning the competition three years ago.

Madelaine, who is in Year 8, received the Sir Dove-Myer Robinson Memorial Trophy for her humorously titled speech ‘Why parents can get it horribly wrong’.

We also extend our congratulations to Year 8 Boys’ School student Edwards Wilkes whose original speech on ‘Marmite’ won him 2nd place in the Year 7 and 8 Competition.

Edward’s winning speech had previously taken him through to win the Elsie Moore Memorial Speech Cup at the Boys’ School Senior Speech competition earlier in the term.

Again, the Year 5 and 6 competition was of a high standard with 14 schools involved, and Year 6 student Zara Smith represented the Girls’ School well delivering her speech with confidence and enthusiasm.

Well done to all students who participated. 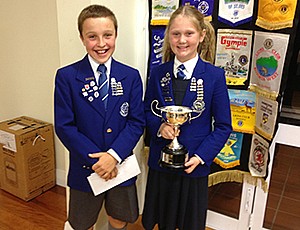