It was an exciting opportunity for our College footballers to see the FIFA U20 World Cup trophy when it visited the College last week. The trophy is in the country on a national promotional tour in anticipation of the international tournament, hailed as one of the biggest sporting events in the world, which New Zealand is hosting in 2015.

Bringing the trophy to the campus, we welcomed back Old Collegian and New Zealand U20 football representative, Matthew Ridenton. Matthew graduated from the College in 2013 from where he took up his professional football career with Wellington Phoenix. The New Zealand U20 midfielder has recently earned a national team selection with the All Whites and will join the 18-man squad to play South Africa on May 30.

Speaking to a full Chapel, Matthew gave an inspiring talk on his footballing career and how the upcoming tournament will be a fantastic opportunity to watch international football at its finest. Former All White captain, Mr Chris Zoricich also spoke on his international sporting career, making his debut aged 18 against Israel in a World Cup qualifier in 1988. The students then had a chance to have their photograph taken with the guest speakers and the trophy.

The trophy arrived in New Zealand on 5th May. It was welcomed to the sacred Waitangi Treaty grounds on a 30-paddle waka which was followed by a karanga on the beach. It will now make its way down the rest of the country before finishing up with a festival of football-related activities in Wellington on May 30 - marking exactly one year until the official start of the FIFA U20 World Cup 2015. 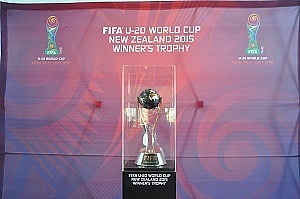 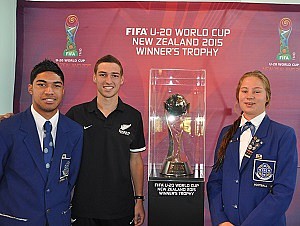 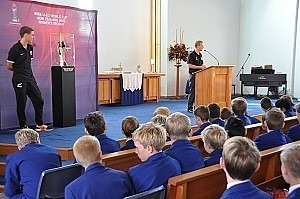