Do Fish Have Eyelids and Sharks Snore?

Our Year 3 and 4 girls recently experienced a magical night at Kelly Tarlton's for a sleepover where they observed firsthand whether fish close their eyes when they sleep, or if sharks snore!

The girls were extremely excited as the big day finally arrived. For some girls this was to be their first time sleeping away from their families, other girls just could not believe that they would get to stay up as late as 11.00pm.

The evening began with everyone arriving at 7.00pm, including the Girls’ School Principal Dr Hastie. Stephen, one of the Kelly Tarlton’s staff, wowed the girls with his stories about the difficulties the early explorers faced in Antarctica.

The girls fed the fish, tested their ability to endure below zero degree temperatures, watched what the fish do at night and checked out the new penguin enclosure. They were fascinated to learn that as sharks are underwater they do not snore, and fish eyes remain open when they sleep because they do not have eyelids!

By 11.00pm everyone was well and truly ready for sleep. The next morning the girls were so weary from their aquatic adventures they had to be woken by Mrs Roband and Miss McKenzie at 7.00am! After breakfast they visited the penguins again and learnt about the history of Kelly Tarlton’s.

While the girls were not thrilled to hear that they had just slept the night in the old sewage holding tanks, they did admire Kelly Tarlton’s determination and hard work to achieve his dream of building an aquarium in Auckland. 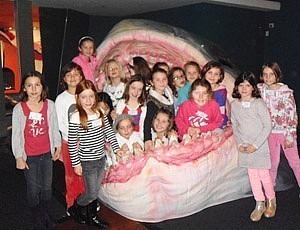