Following on from last week’s Choral Proms, the second concert in the Proms series on Saturday night featured a fantastic guest spot by the Royal New Zealand Navy Band, who presented their own programme as well joining our Concert Band for three massed band items.

The evening opened with the Jazz Combo entertaining as guests took their seats before their ranks were swelled by fellow musicians as they morphed into the Stage Band. Directed by Mr Paul Norman, both these groups play without a conductor, setting the pace and tempo themselves. Playing ‘Corner Pocket’ and followed by the Funk and Swing number, ‘BeBop ‘n’ Georgia,’ each of the Stage Band items allowed for solo improvisations from key players.

Over the years, our Concert Band has been renowned for delivering exciting and fulsome pieces selected by conductor and Head of Music, Mr Ross Gerritsen. Saturday night’s concert was no different as the band opened with the exotic, Egyptian style melodies of Caravan, originally recorded by Duke Ellington.

Based on Langston Hughe’s Poem, Dreams, the following number was a complete change of tempo as Iris Lee took the piano solo, accompanied by the band for the lyrical, ‘Dreamsong.’

Gene Kelly’s trademark tap-dancing number, ‘Singin’ in the Rain’ brought a light-hearted moment before the band finished their set with the rousing march, ‘Invercargill.’ As noted, it seems unlikely that a march written by a New Zealander in the southernmost city on the globe, Invercargill, would end up becoming one of the most famous marches in the world!  Sitting in the same company as John Philip Sousa's ‘Stars and Stripes Forever,’ Kenneth Alford's ‘Colonel Bogey March,’ and the ‘Radetzky March’ by Johann Strauss, ‘Invercargill’  has gained international popularityas a top favourite of the US Marines.

Following the interval, we were fortunate to hear from the Royal New Zealand Navy Band. Based at HMNZS Philomel in Devonport, this is an extremely versatile group of full time, professional musicians. Whilst their primary role is to perform as a military band, they can reconfigure themselves into a variety of ensembles depending on the occasion.

It didn’t take long for the band to quickly draw in the audience with their fabulous repertoire. They played a variety of pieces but the audience favourites were the moving ‘Requiem for a Soldier,’ with solo vocalist, Able Musician, Rebecca Nelson, who performed this at the recent Anzac Day commemorations. In complete contrast, ‘William Tell Overthrown’ was a humorous take on the well-known classic with some unexpected interruptions by jazz musicians!

The final set of the evening brought the Navy and Saint Kentigern together in one massed band that squeezed on the stage to play ‘Anzac Medley’ and ‘Hymn to the Fallen,’ conducted by Leading Musician, Mr Colin Clark of the Navy, followed by the lively ‘Merry Go Round’ conducted by Mr Gerritsen.

No military concert should finish without a march and so the massed band closed the evening with a rousing repeat performance of ‘Invercargill.’

Our thanks to the Royal New Zealand Navy Band for the taking the time to play for and with our musicians; this was a really enjoyable evening’s entertainment.

Both regular and table seating available.
Tabled seating includes dessert and mulled wine.
Tickets may be purchased at the door or online. 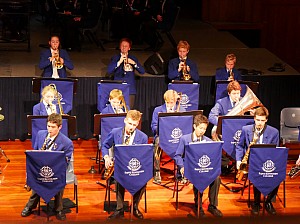 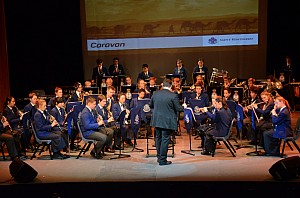 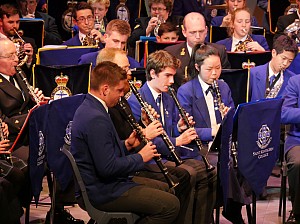 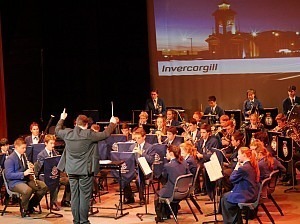 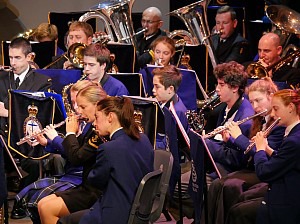 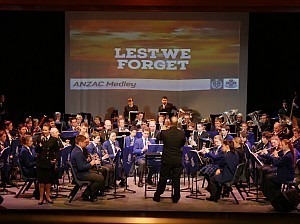