Matthew Manning came first in the Junior Boys, which was a very tight race against Daniel Hoy from Westlake Boys High School - the boys were neck and neck for most of the way.  Matthew and Daniel ran the first 2 kilometres in a time of 5:50, with Matthew then clocking an overall win at 12.01 for the 4 kilometres amongst a field of 144 boys.

Liam Ward was 36th in a staggering 245 strong field.  Liam is in his first year in the three-year senior boy’s field and his placing at 36th was an incredible result for him, and a credit to all the hard running training he has been putting in.

Fraser Hamilton had a fantastic 3 kilometre race and came 14th in a very strong field of 177 Year 9 boys, while Madeline Evans was 10th in the senior girls’ race, with 142 girls racing.

From this result we are pleased to announce that Madeline has been named in the New Zealand Secondary School Cross Country team to compete in Tasmania, later in the year.

With thanks to Nicola Manning and Allan Hamilton. 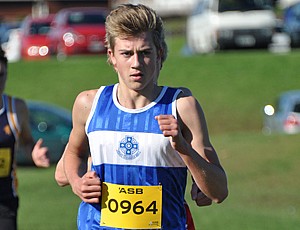