‘Ending preventable blindness is my fight. What is yours?’ This was the inspiring challenge delivered to the audience at the recent TEDx Auckland event, by eye doctor, Hong Sheng Chiong. His talk was met with a standing ovation.

TEDx Auckland was another hugely successful event, opening Aucklanders’ minds to new ideas through inspired stories, sustainable thinking and innovation. This year was the fourth year that the Enhanced Learning Centre has taken a group of gifted and talented students. Students from the Year 13 Scholars group also attended the event, held earlier this month.

Year 13 student, Jeffrey Chan commented that, ‘the common trend among speakers was that they were all ‘regular’ people doing extraordinary things. My personal favourite was an eye doctor who invented a device that was able to be attached to the camera of a smart phone. This enabled Third World countries that cannot afford expensive optometry equipment, to be able to fix eye impairments with minimal cost.  As someone who is hoping to go into a medical career in the future, a message I took away from this talk was that a career is not just to make money, but also to use the expertise you are given to help society.’

Year 11 students, Alyssa Hatton said that her ‘overall favourite of the day was Billie Jordan – founder of Hip-Operation. It was incredible to hear how she had built up her life after a very difficult childhood in order to make a real difference to her community and beyond. TEDx Auckland was an incredible experience and I walked away with tons of knowledge and lots of new ideas on topics I hadn’t previously considered.’

Many people will be aware of TED the Talks format - thousands of online talks devoted to ‘ideas worth spreading.’ ‘Having the opportunity to sit in the crowd was a completely different experience altogether,’ said Jeffrey Chan. ‘It was truly a perceptive-changing event which gave us motivation to contribute back to the world and help those in need.’ 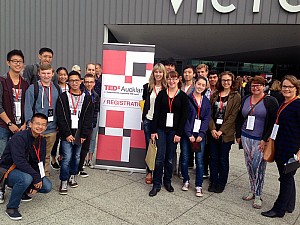