The end result is ‘Beach Blanket Tempest’, a play written by Denis Watkin in the early 1980s who wanted to take Shakespeare to the most ludicrous location possible, so why not a beach party?

This razzle dazzle, wild and wacky rock spectacular is set to be the annual production for the College Middle School, and rehearsals are now underway for the much anticipated Term 3 event on 7-9 August.

It is the story of Vince Prospero; he is the Duke Of Rock ‘N Roll, a superstar of Elvis proportions. He is marooned on an island with his gorgeous daughter, Annette. Their ‘spirit’ is Gidget, a genie released not from a tree, but from a bottle. She wants to be free and ride the wild surf of the world. The ‘other resident’ is Moondoggie, a delinquent teenage punk biker. Just as in Shakespeare’s tempest, a wild storm is whipped up in Beach Blanket Tempest to bring the evil brother and his cohorts to the island, with Vince Prospero setting up a series of tests, designed to reveal Tony Prospero’s true evil character.

Today, the most entertaining ‘tests’ are of course quizzes on television. So, true to form, the last part of Beach Blanket Tempest takes the form of a Giant Quiz Show where Tony Prospero and other contestants are invited to ‘come on down’! The chorus sings, “Will you take the great temptation?”, as the evil brother’s true character is laid bare.

Power ballads, romantic duets and sixties rock create a fast paced, high energy show that has previously achieved much acclaim, and is a must to put on your calendar for next term! 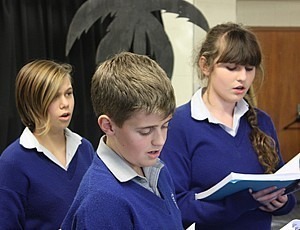