After a 'season' of debating that included 108 schools from around Auckland, the Junior Debating contestants were whittled down to two schools for the Auckland Schools Debating Junior Open Grand Final this week. With so many schools involved in the earlier rounds, to make it to the finals was a significant achievement. Having both won their semi-final round with the moot 'this house regrets the prominence of the Rugby World Cup,' the two schools vying for the championship title were Westlake Girls' High School and Saint Kentigern College. Middle School students, Abbie Pool, Ben Staite, Ben Fraser and Nick Kirk were our representative debaters.

The moot, given to teams an hour before the Grand Final debate, was 'that parents should be held criminally liable for their children's obesity' with the Saint Kentigern team taking the affirmative.

The young speakers from both sides were confident in their presentations, discussing a range of issues. In a close but spirited performance, Saint Kentigern College was deemed the stronger team, taking the cup, and the title of Junior Open Champions for 2015! This is the second time in three years that a Saint Kentigern team has won the Junior event; the last time in 2013. Well done!

Special recognition goes to team member, Abbie Pool who was named as one of the top ten speakers during the course of the competition. 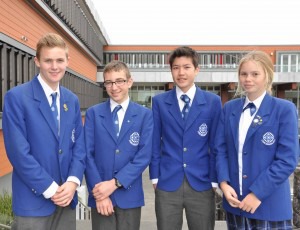