It was a proud moment for Year 9 student, Zara Iqbal standing on stage to receive her 1st place award at the NIWA Manukau Region Science Fair last week. Zara’s winning entry, ‘Killer Mouthwash’ won the Year 9 to 13 Secondary Consumer Science category; she also received a Special Award for the Best Year 9 entry in the Innovation, Invention or Investigation category.

Zara’s project investigated whether using mouthwash had any real benefit. Despite the marketing messages, attractive packaging and product promises of supermarket brands, do they really do what they claim? And which brand kills the most bacteria? Her analysis was undertaken under strict laboratory conditions where she grew and measured two types of live bacteria; Micrococcus sp. and Staphylococcus sp.

Zara’s results were surprising against her original hypothesis. Popular brands Listerine Zero and Pam’s proved to be the least effective mouthwashes against both bacteria - both inhibiting and killing zero bacteria. Zara also found the Pam’s product had no claims to its performance except to freshen breath! The most effective tested against Micrococcus sp. was MacLeans and the least well known herbal brand Sarakin fought the most bacteria against Staphylococcus sp.

Zara’s thorough research and analytical thinking in her science projects has seen her win placings at the Manukau regional awards for the past three years. In 2012 she received 3rd place and in 2013 she won Highly Commended. She has a real passion for science and her career aspiration is to become a geologist. Congratulations Zara on your winning entry and to all the Year 7 and 8 winners who placed at the awards.

Elizabeth Lightfoot: ‘I Wish That I Had Duck Feet’ - Years 7 & 8 Living World 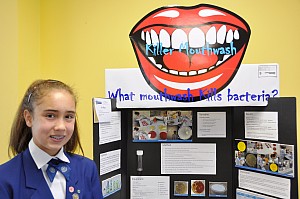 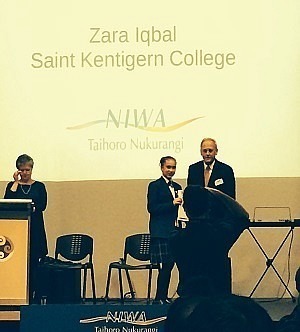 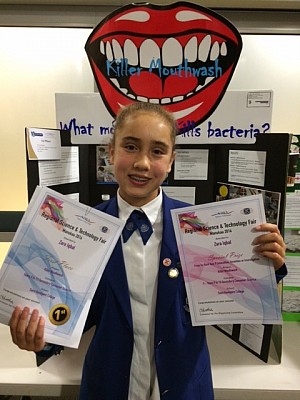