To round off the performing arts year, guests filled Elliot Hall last night to celebrate our remarkable student talent at the annual Celebrating the Arts evening. In reflection of the year that has been, Middle and Senior College Dance, Drama and Music students entertained the guests in between the award presentations.

The Jazz Combo and Concert Bands played as our guests arrived and took the opportunity to view the Visual Art displays from our NCEA art students. Once seated, the Pipes and Drums officially opened the evening, making a grand entrance onto the Elliot Hall stage. Head of Performing Arts, Naomi Wilson and Arts Prefects, Venice Qin and Matthew Turner welcomed everyone and shared some of this year’s highlights. The evening was a great success and offered a mix of entertainment while awarding those students who have dedicated many mornings, lunchtimes and evening hours to the arts.

The Drama department shared some of their highlights for the year and stated that in February, five students gained Scholarships from their 2018 Examinations. This included one Outstanding Scholarship recipient (Lauren Aspoas) and three current year 13 students gaining the achievement. This was the highest number of Drama Scholarships awarded to anyone school for 2018. In Term 2, the Play Series showcased six senior classes of over 100 drama students, performing over three weeks in five different plays. The style and theatre forms included, Theatre of Cruelty, Absurdism, Elizabethan, New Zealand, contemporary and Verbatim styled theatre genres.

The Year 13 extension class toured a devised Theatre in Education Show to teach preschool aged children the value of numeracy in a fun and interactive way with ‘One More Sheep’. Shake the Quad was well attended, and the performances were strong, and students were recognised at the regional Shakespeare Festival with a Special Award for their clarity and consistency of voice and language.

This year marked the 12th year in a row that Saint Kentigern has made the Theatresports Grand Final and the first year a mixed gendered team played in this final and they placed third overall.

It has also been a fantastic year for Music as they have claimed four Gold Awards (Symphony, Big Band, Concert Band at KBB and Nationals) and five Silver Awards this year (Kentoris, Chamber Orchestra, Stage Band, Jazz Band & Combo at regionals). The Chamber Trio also gained National success, as well as many other students who placed at the Auckland and/or National Youth or Secondary Schools Choir, Concert Bands and Orchestras. Year 13 students, Jesse Niu also received ‘Outstanding’ for his 2018 Year 12 NZQA Music Scholarship. The NCEA Music and Music Project classes continue to go from strength to strength, with the majority of students completing their performances and composition standards in the co-curricular ensemble events throughout the year. Several senior musicians have volunteered to take an active role by sharing their musical talent and passion with the students at Boys’ School and Girls’ School. With over 250 students, 30 music tutors and 35 ensembles it has been a very successful year.

Over the course of 2019, we have had many successes and achievements within Dance, with the annual Dance Showcase being the highlight of the year for the dance students. This year, we introduced student-led Dance Troupes to the Showcase, which was a fantastic addition, with some of our Senior Dance students taking the opportunity to develop their leadership skills along with their choreographic skills.

We also had success out of school with a group competing at the World HHI. From the Royal Family, we had Renee Salesa, Maia Salesa and Mila Stanisich place fourth and from Rebellious, Charlotte Richardson, Montoya Ottaway, Gema Whitford-Joynt and Panen Gu place tenth. We also had several students achieve success at the Auckland Caledonian Society Dance Competition. We had Ruby Ryburn, who dances with MEBA, win at the Ora Burnett Jazz Awards and placed as a finalist for the Hillary Peacock Ballet Award. We also had Isabelle Fox gain third place in the Ora Burnett Jazz Awards. Our Senior Hip Hop crew LUX, led by Senior Dance student, Raychel Tapsell also did particularly well and were invited to perform at the Tempo Dance Festival.

The most anticipated item of the evening was who would be crowned ‘Performer of the Year’ for the Middle College and Senior College. An exceptional programme is only made possible by the dedication of students, which made the decision this year extremely difficult. But two students stood out, covering all areas of the arts – Melody Lui-Webster and Venice Qin.

Both students met the criteria being; they had lead roles or leadership in Arts performances, received significant Performing Arts awards and represented Saint Kentigern at a regional, national and/or international level.

MIDDLE COLLEGE PERFORMER OF THE YEAR 2019

Melody Lui-Webster
Melody embodies everything we expect of an outstanding performer. She takes Drama and Dance academically, is part of both Kentoris and the Massed Choir, takes Trinity Speech and Drama, as well as being a member of the Drama Club and several Dance Troupes. In fact, most of her spare time is spent in the arts.

For someone who is only in the Middle College, her performing arts experience is extensive. This year alone, she sang with Chalmers House Band for House Music and performed solos at both the Middle College Music Evening and the Cabaret Evening. She performed a total of six dances in the Dance Showcase and her film was also screened here.

Outside school, Melody played the lead role of Morticia Addams in the Children’s Musical Theatre production of the Addams Family. She followed this up with an unforgettable performance as Truly Scrumptious in the Middle College production of Chitty Chitty Bang Bang in May.

Melody is a true professional! She is always in the right place at the right time, listening to all direction, supporting her peers and showing kindness for everyone. She is creative and passionate and a phenomenal performer.

SENIOR COLLEGE PERFORMER OF THE YEAR 2019

Venice Qin
Venice is a truly exceptional performing artist, with a broad range of skills. She is fully dedicated to the Arts as a performer, leader, mentor and helper. She will never turn down an opportunity to get involved and has immersed herself in the Arts during her time at the College.

Her Performing Arts CV is extensive but some of the highlights for this year include:  Winning Silver in the Auckland Secondary Schools Jazz Festival and Gold in the KBB Music Festival as Jazz Soloist for the Big Band. She has been the Jazz Combo vocal soloist for two years and won Silver at the Auckland Secondary Schools Jazz Festival this year. She has also been in leadership roles as the Kentoris Choir Leader and Lower Wind section Leader for Concert Band – winning numerous awards. She is the Principal Bassoonist for the Symphony Orchestra where she Won ‘Best Performance of a Classical Work’ for Mozart’s Bassoon Concerto. She is a member of both the Chamber Orchestra and Chamber Group and was a Solo Music Finalist again this year.

Venice is also a keen actor and she received a PACANZ Nomination for National Young Performer of the Year (In the Speech and Drama Section), both in 2017 and again this year. Many will remember her for her outstanding performance in a lead role as Golde in this year’s Senior College Musical Fiddler on the Roof.

She has balanced all of this, many commitments and achievements outside of school with the demands of her IB studies and being part of our phenomenal Arts Prefect duo.

Not only does Venice have an extensive understanding of the Performing Arts but she is an incredible ambassador for it. She is a highly engaging young person who connects well with everyone she meets, regardless of their preferred art or style. She is empathic, kind, generous, dedicated and humble but maintains outstanding standards in everything she does – all the traits we look for at the College in a role model. We wish her luck next year as she applies to study Musical Theatre in the United Kingdom. 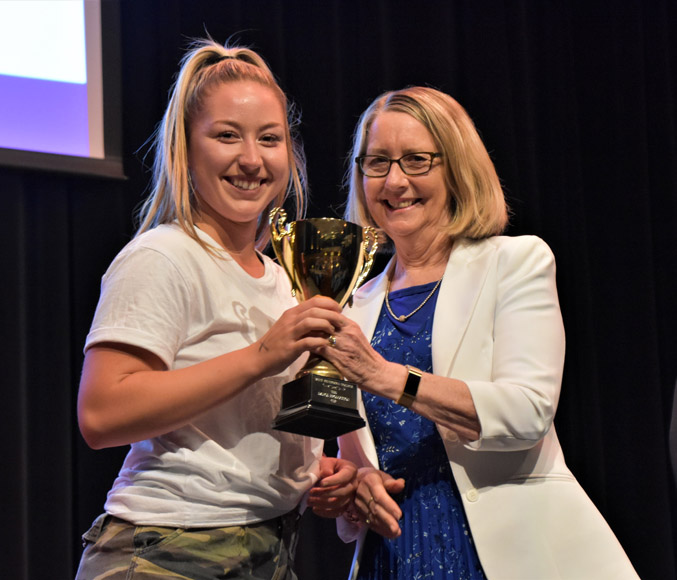 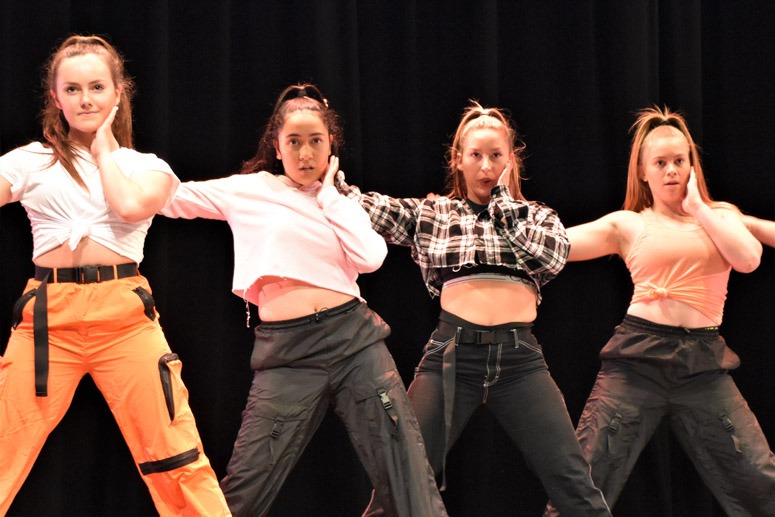 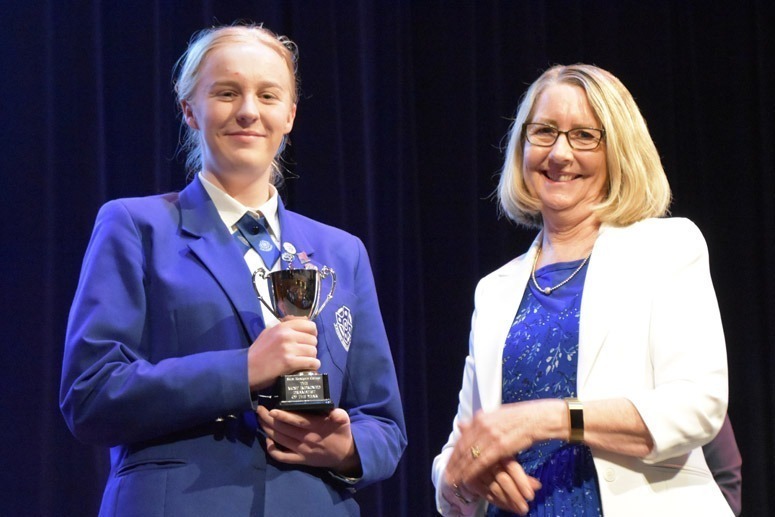 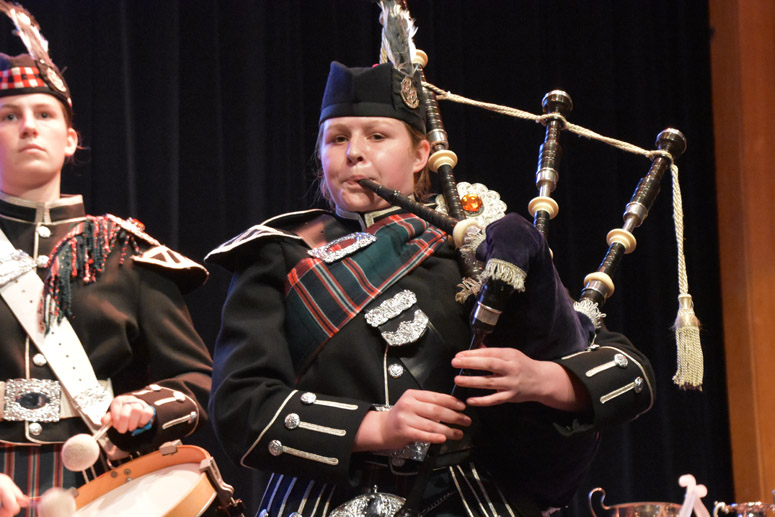 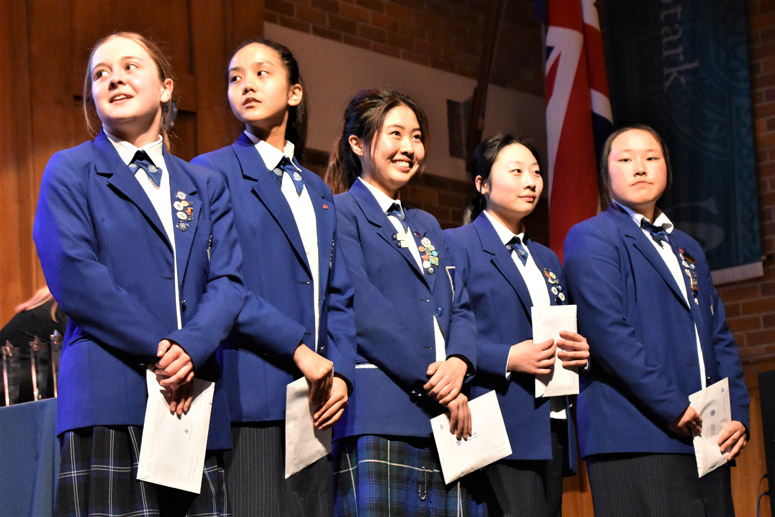 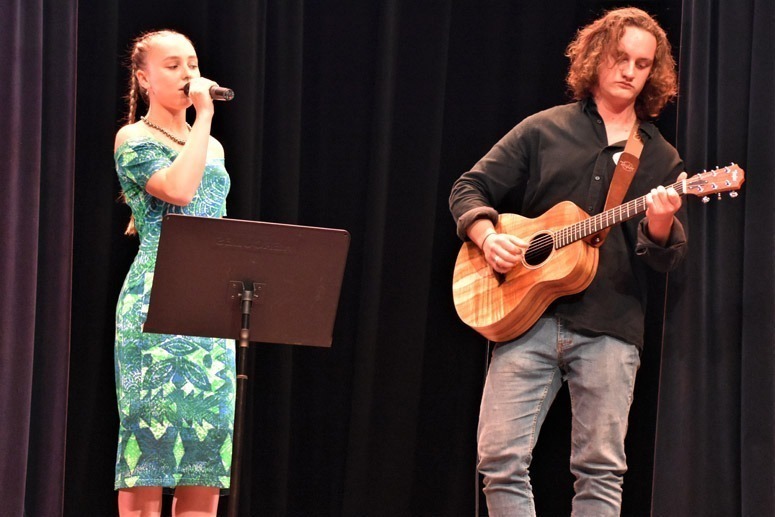 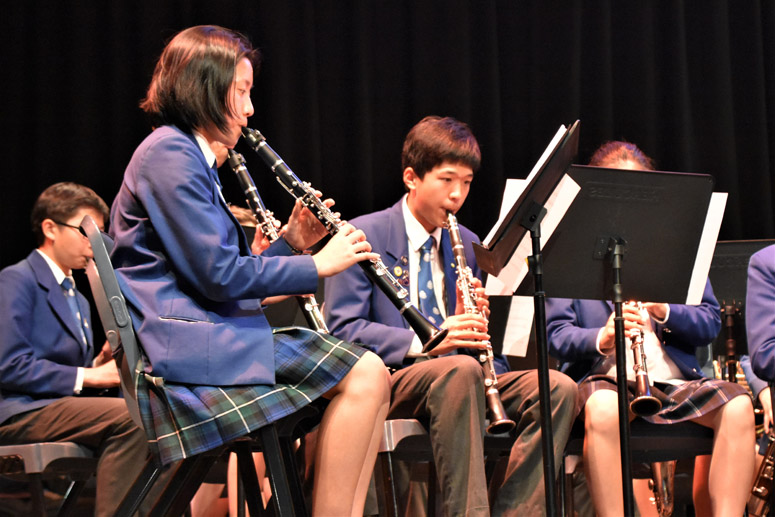 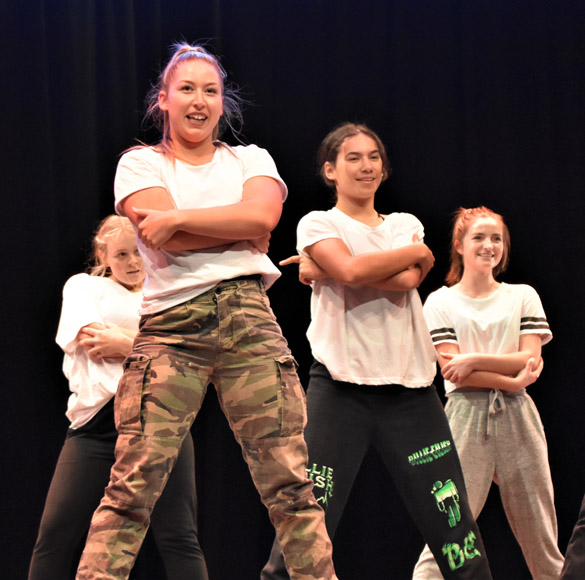 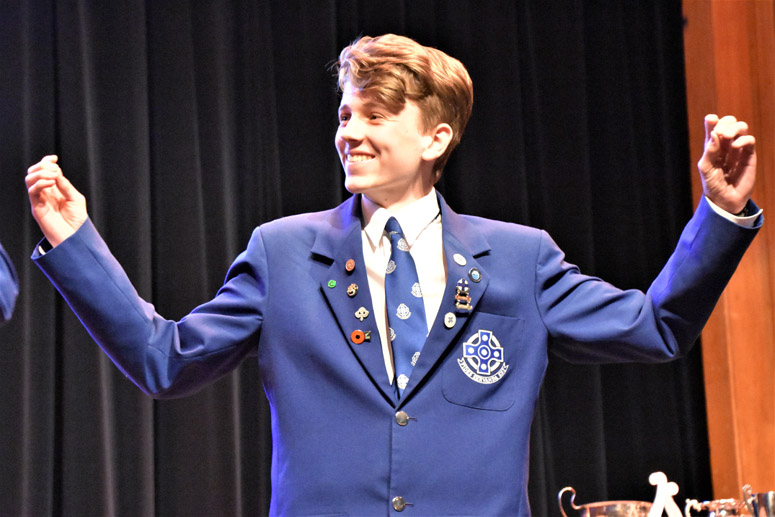 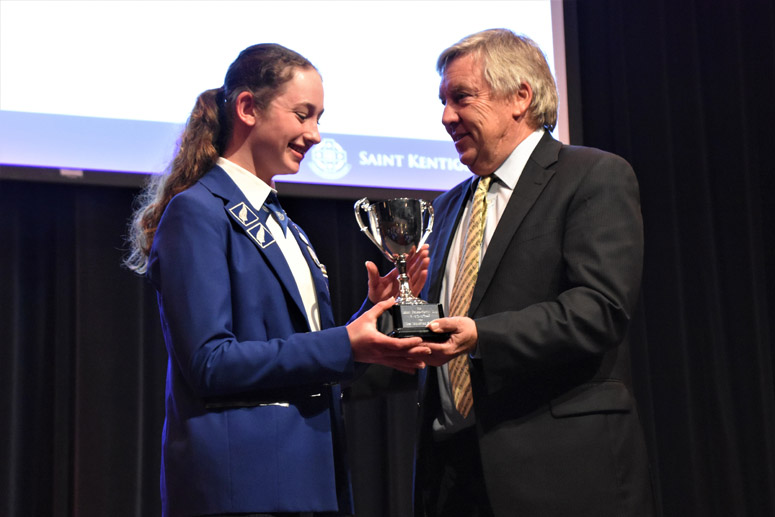 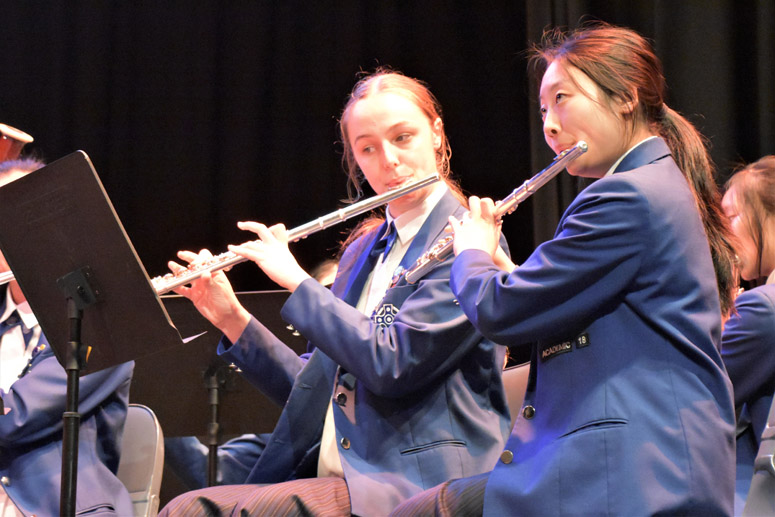 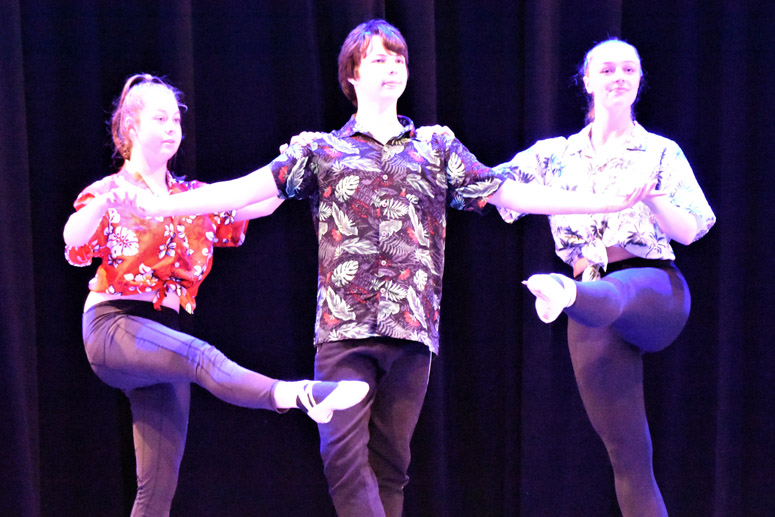 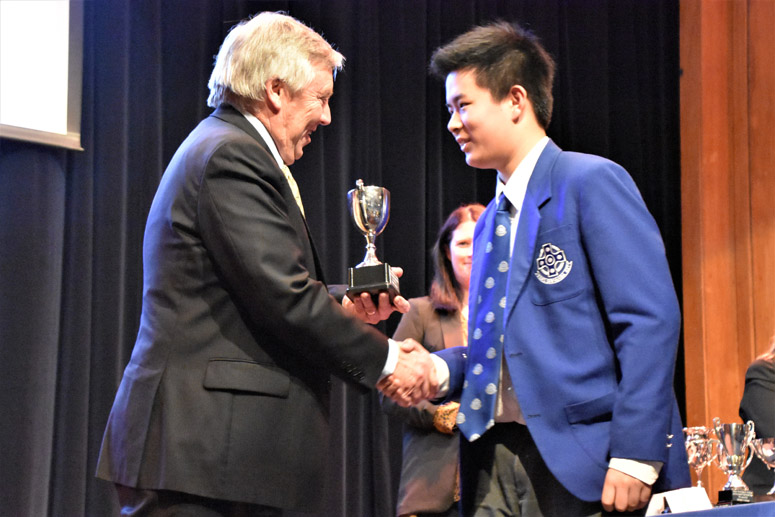