It was a great adventure for the preschoolers when they set out on a trip to Devonport for the day. Departing Preschool on a bright blue bendy bus, they headed for the Quay Street Ferry Terminal downtown.  The Ferry Terminal was very busy and there were plenty of boats to watch as they waited for Preschool Director, Sue to pay for 75 ferry tickets before they could board the ferry to Devonport!

On the ferry the children lined the windows watching the busy Waitemata Harbour.  They saw yachts, other ferries, kayakers, speed boats and were excited to even spot a police boat! At Devonport they headed to the playground for morning tea and once refuelled, they were able to choose to play in the playground or on the beach.  It was very windy day and the tide was high making great waves to splash in on the water’s edge. Sand castles were built, and decorated with discoveries of sea kelp, shells and drift wood.

Drizzle set in at lunchtime but not enough to dampen spirits and after once last play of games and a stop for an ice block treat, a group of tired children and adults took the journey in reverse to Preschool.

Belonging: Children develop an understanding of the links between Preschool and the wider community – with interest and pleasure in discovering an unfamiliar world where the images, objects, smells and sounds are different from home. 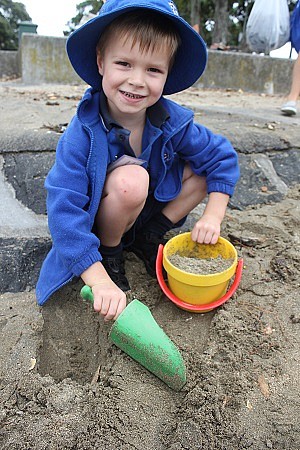 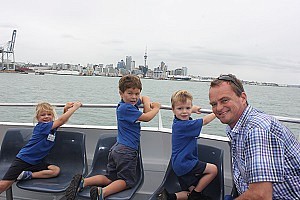