For the last few weeks, the Year 7’s have spent time planning carefully for the very first Leadership Camp held at Motutapu Island last week. With very little teacher input, the boys were required to sort themselves into groups, work out their own mode of transport to the ferry terminal from school including costs and timetables, and budget and design their own menu for lunch and breakfast on a budget of $100 for the whole group. Once on the island, they had to prepare their own meals in their groups and all the activities involved teamwork, problem solving and using their initiative.

We had to create our own shopping lists for breakfast and lunch and plan how we would get us and the food to the ferry and then onto the campsite. This might sound easy but we had no fridge to keep things cold and no cooking items!

When we arrived, we were relieved to find our tents already set up by the Year 8 boys who had been on the Service Camp the night before. We hoped that the thunderous black clouds stayed far away as nobody fancied getting wet!

We began the first camp activities solving eight leadership problems as a tutor group. We had to use teamwork and leadership to solve the problems. For example, in Mine Field, a team of 13 boys had to make their way through a minefield without talking, using only gestures, body language and any other practical, non-verbal communication techniques.

At night we played ‘Find the Teacher’ to decide our starting positions for the following day’s hike. (I think we found them all and remembered to bring them home!)

The next day started early. The amazing race involved following a map over both islands, completing various team challenges such as noting the flora and fauna of the island, finding Mr Fitness’s wedding ring, taking team mid-air photos and photo evidence of native NZ birds on the island. By the end, we had trekked for 6 hours we trekked around Motutapu and Rangitoto and completed five tricky challenges. That night we played ‘Piece of Cake’ and by the end of the game everybody was exhausted. But not at all hungry!

When we woke on the final morning we ate a quick breakfast and set about cleaning up the campsite.  We had to carry all the food boxes, bags, tents and rubbish to the wharf where they would be picked up by the ferry. We were all tired but happy, and satisfied with a fantastic few days.

Year 7 student, Luke O’Neil said ‘It was one of the most physically challenging things I have ever done!’ 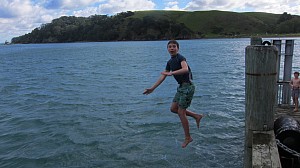 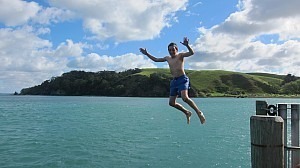 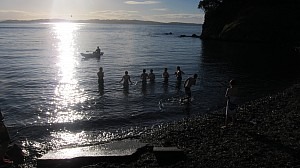 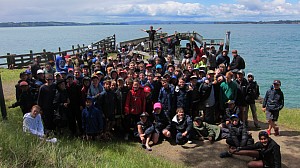 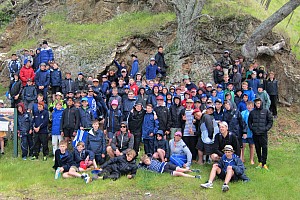