The best Year 5 and 6 mathematicians in the area pitted both mathematical knowledge and running speed at last night's Remuera Zone Mathex competition hosted by the Boys' School in the Jubilee Sports Centre - a fantastic venue for the event with plenty of seating for spectators. The competition was stiff but we are delighted that the Year 6 team comprising Nathan Bailey, David Allan, Akash Mudaliar and William King were the outright winners in their grade!

Mathex is an exciting night for the students and spectators where teams of four are posed 20 tricky mathematical questions in an attempt to gain a full score of 100 points.  There is a twist in the competition! This is not is not a traditional sit down and write a test. Nor is it an online ‘choose the correct answer.’ Mathex not only requires quick team thinking and accurate calculations, it needs a team member who can run – fast!

The runner from the team must first complete a sprint loop around the stadium to collect the question, return to the team table for the team to answer it and then run back to the marker with the team’s answer.  Phew! The next question isn’t handed out until a correct answer is achieved. If the answer was wrong, the runner has to go back to the team! So the teams are not only pitting their mental skills but also trying to beat the clock.

Nathan, David, Akash and William proved they had the right combination of quick thinking and quick feet to be winners on the night! Well done boys! 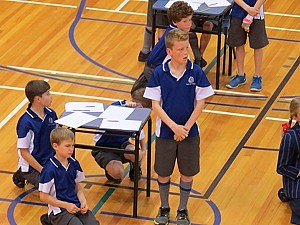 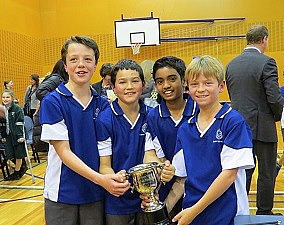