Eyes opened wide and jaws dropped when a most unusual visitor paid a visit to the Boys’ School today! And it wasn’t only the Year 3 boys in awe, the teachers were equally taken aback when a life-like baby Tyrannosaurus Rex, weighing close to 180kgs, lumbered across the Junior School playground with eyes glinting, tail swinging and its huge row of teeth taking snaps at anyone in reach!

To begin with, it was only the curious brave who stepped forward to get acquainted with the prehistoric creature – but one by one, the boys put on brave faces and inched forward, reaching out to touch the scaly skin. It didn’t take long before they all clamoured round – all that is except the two wee lads who’d taken fright and were later spotted seeking refuge indoors!

The visit from Dinosaur Experience heralded the start of a unit of work about the prehistoric creatures. It was explained that by necessity, the ‘Baby T Rex’ sessions are kept short as it is quite draining on the operator inside the animatronic creature – the heat build-up takes its toll. With the costume itself weighing in excess of 100kg, the weight alone is a trial but add the movement, twisting from side to side, limited visibility and two classes of excited, small boys, and it all adds up to a fairly challenging performance!

A small video camera lens on the outside of the dinosaur’s neck relays images to a TV screen inside the cramped space allowing the operator to gauge distances. For safety, amongst excitable school boys, a ‘keeper’ kept the creature on a lead to make sure those teeth didn’t cause any damage!

And the verdict? Realistic, scary and great to experience!

Tyrannosaurus Rex
Tyrannosaurus (meaning ‘Tyrant Lizard’), was one of the largest terrestrial carnivores of all time, being roughly six tonnes in weight with its massive skull balanced by a long, heavy tail. The heavily reinforced skull of the ‘T Rex’ suggests that it was a devastating predator, with the strength to induce a bone-crushing bite from its jaws armed with 150mm long, sharp, serrated teeth. Relative to the large and powerful hind limbs, Tyrannosaurus forelimbs were small and retained only two digits. Recent specimens have shown the tiny arms to have been well-muscled, presumably to enable the animal to anchor itself to the ground as it attempted to straighten its hind legs and stand up from a prone position. It was among the last dinosaurs to exist prior to the Cretaceous-Tertiary extinction event. More than 30 specimens of T Rex have now been identified, some nearly complete, which has allowed significant research into many aspects of its biology, including its life history and biomechanics. 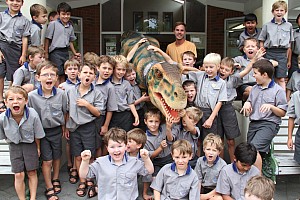 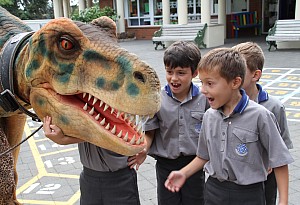 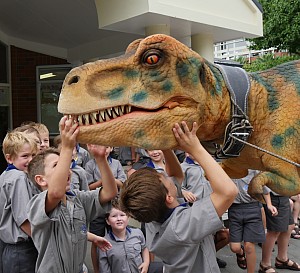 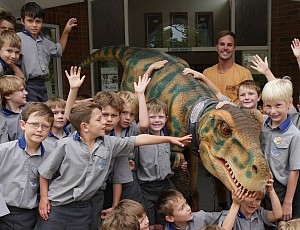