It was an early start for the boys and their fathers over two consecutive mornings this week for the annual Father and Son breakfasts. It was an even earlier start for the volunteers from the Parents and Friends who set the tables and did a sterling job preparing and serving a delicious breakfast to suit the palette of all ages!

Mr Richard Beca and Mrs Laura Lane represented the Parents and Friends in welcoming our special guests for the two mornings. Senior Constable Kelvin Roberts, Sergeant Scott Williams and Senior Constable Chris Harris from the Auckland District Police Dog Section, along with their four-legged companions, Flash and Quanto, joined the boys and their fathers In the JC Chalmers Hall to share breakfast. Table space was at a premium for this well attended event!

The boys and their fathers were given a fascinating insight into the life of police dog handlers around the country whose job often means the difference between whether or not a crime can be solved - often in situations that could compromise their own safety, if not for their professionalism and the incredible teamwork between man and dog. The dogs are primarily deployed in any incident where violence may be used against the police or members of the public and it was heartening to hear that Constable Harris has recently received a bravery award for this very reason.

The boys learned that dogs are trained for three principal roles; as all-purpose patrol dogs for tracking and search and rescue, and for drugs or bomb squad training. It was interesting to hear that the drug dogs are also trained to sniff large quantities of money!

The dogs used are primarily German Shepherds and there are over 100 tracking teams in New Zealand whose services are also called on overseas in situations such as the tsunami in Samoa and the bush fires in Australia. An interesting fact is that a German Shepherd has 220 million receptor cells for smell compared to only 5 million in a human – hence their amazing ability to follow a scent! One tip from the police is that a dog is trained to detect the most recent scent so in the case of a burglary or home invasion, don’t be tempted to walk around your property – wait for the police!

The moment the boys were really waiting for took place out on the field as Quanto was put through his paces. An unsuspecting mother had her handbag ripped away and the boys watched in awe as Quanto tracked down the offender and brought him to the ground! As the dog rushed forward, there were some very surprised faces on the boys, followed by relief when the dog stopped short!

We are grateful to the police team for spending time to share their stories and are especially grateful that we were blessed with two fantastically sunny, winter mornings for the outside display!

We offer our thanks to the Parents and Friends team who pour heart and soul into this event every year, in particular, Erica Hussona who has managed the event for a number of years, who, along with co-worker, Jessica O’Rourke is stepping down this year. To fellow parents, Kirsten Faulkner, Tanya Holyoak, Sally Barkman and Roz McLoughlin, thanks for joining Erica and Jessica for the early morning starts! We really appreciate the work you do! Not only was there preparation, but also a lot of cleaning up afterwards!

Our thanks to the following businesses who very kindly donated services and food: Nestle, Venluree, Gravity Coffee and Bell Tea. 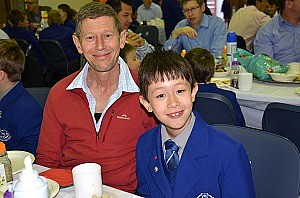 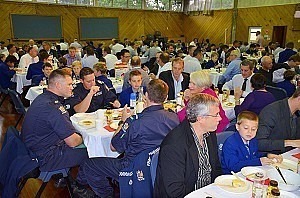 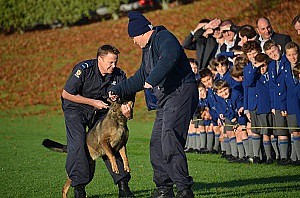 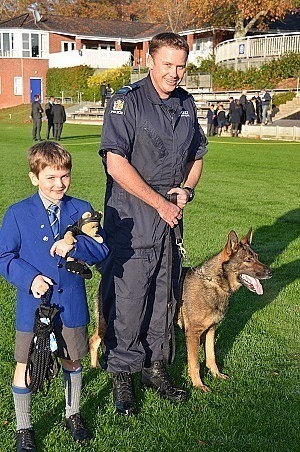