Guest speaker, ‘Blade Runner’ Liam Malone, received a standing ovation at last night’s Year 8 Graduation Dinner. His message to the 123 Year 8 boys, about to leave their primary years behind, was loud and clear, ‘Aim high and push yourself beyond your limits – never say never, you’ll never know what you’re truly capable of if you don’t try.’

Well over 400 students, parents, staff, Trust Board members and invited guests gathered for dinner at the Ellerslie Convention Centre, to reflect back on the boys’ last eight years of friendship and learning as they ready themselves for the next step in their education.

The Dean of the Senior School, Mr Richard Kirk opened the formalities saying, ‘When I look back at the things that you have achieved over the course of this year, I am honestly amazed.  I thought the students in schools where I have taught previously were busy people; then I came to Saint Kentigern!  What we pack in is huge, truly a ‘world of opportunity,’ but what strikes me most is the manner in which you boys undertake the tasks - service, classwork, sport, drama, music - the list goes on, and in each and every area, you has given your utmost.’

The School is grateful to the Old Collegians for sponsoring the dinner each year and welcomed the president, Mr Andrew Morgan to speak. Andrew encouraged the boys to reflect back on their time at school and to keep in touch through the Old Collegians Association as they go through life. In keeping with the theme for the night, he concluded by quoting Michelangelo, ‘The greatest danger for many in life, lies not in setting their aim too high and falling short, but in setting their aim too low, and achieving their mark.’

Many looked forward to hearing ‘Blade Runner’ Liam Malone speak following dinner, having seen him leave his mark on the Paralympics in Rio. His story is not one about disability or ability, but rather about attitude. Through sheer determination, he propelled himself into the international spotlight winning gold in the 200m and 400m and a silver in the 100m T44 classification. He set his sights on those goals and achieved what he set  out to do – he has now set his sights on becoming the fastest runner in the world by 2020, legs or no legs.

With his trademark mix of humility, humour and down to earth Kiwi charm, Liam has endeared himself the world over. His story began at birth. Born without the fibula bone in either leg, his legs were amputated from the knee down when he was 18 months old. With strong parenting, he learnt to let nothing hold him back. Two years prior to the 2016 Rio Games, Liam set himself a goal, to represent New Zealand as a runner at the Paralympics – a goal the Paralympic committee didn’t exactly share at the time! They felt he’d left his preparation too late and should focus on 2020. They grossly underestimated the power of Liam’s focus and drive, and with funding from the New Zealand public, his first blades were purchased! The rest is history! His overriding message was to ‘not let the opinions of others become your reality.’ He encouraged the boys to ‘Take a massive bite at something, and chew like hell!’

Deputy Head Boy, Jack Sandelin, gave thanks to Liam. Speaking ‘off the cuff,’ Jack’s speech received wide praise having spoken with confidence, referring back to key points in Liam’s speech; a reminder how well our boys are prepared for public speaking.

In his closing address, Principal, Mr Peter Cassie, made mention of the ‘generational involvement present, with the Tingey, Speakman and Hauser families each having ‘a dad and a son/s’ through the School. The ‘longest years of service’ went to the Russell family who, between father and son, Cameron and Nicholas, had spent 16 full years at the School.

Mr Cassie reiterated Liam’s message of aiming high telling them to, ‘Be like a turtle. In order for the turtle to move, it has to stick its neck out. There are going to be times in your life when you’re going to have to stick your neck out. There will be challenges and instead of hiding in a shell, you have to go out and meet them.’

Our boys have been well prepared in their primary years and we wish them well as they now move on to new challenges, knowing they will always be a part of the Boys’ School. As Mr Kirk concluded, ‘Go out and make the people around you proud, but mainly, make yourself proud!’

A final set of ‘reflections,’ a video prepared by Tonia Mellis, mother of Head Boy, Isaac Mellis-Glynn, looked back on the boys time together, provoking many memories as images scrolled across the screen, dating back to when some were new entrants! The evening finally concluded with one last Haka from the boys. 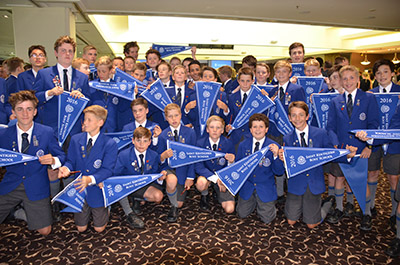 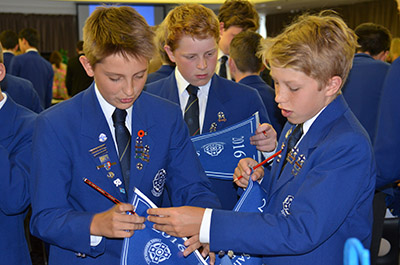 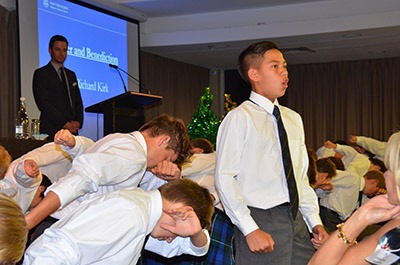 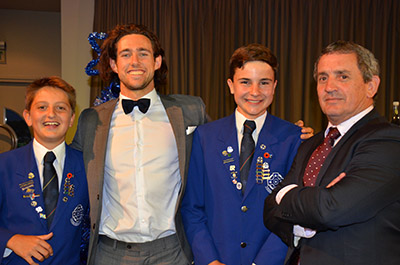 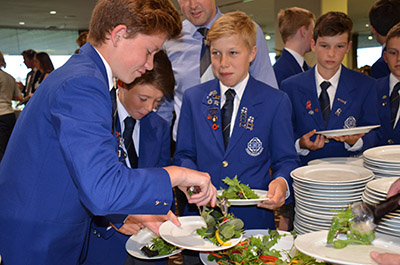 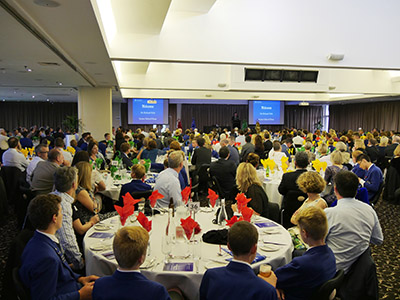