It was dark and damp, and under usual circumstances would be very, very quiet but with the descent of 58 Year 5 boys into the 28,000 year old lava caves under Landscape Road in Mt Eden, it became a place for noisy, exciting adventure – if a little scary for some.

The boys are currently studying the landforms of Auckland with a focus on the extensive volcanic network in our city. They had earlier visited Mangere Mountain and descended into the small lava cave there, but today’s experience was a very different undertaking.

We thank one of our parents, Mr John Foy, for arranging access to this extensive cave system on private land. The boys soon came to discover the extra-ordinary world just beneath the surface of a bustling suburb! With helmets on and torches at hand, the group made their way into the mouth of the cave and into a huge, rock strewn cavern. As their eyes adjusted to the darkness, using their torches to light the way, they gingerly worked their way downwards as the passage narrowed, wriggling their way through a constricted space that opened to another cave that required carefully negotiating a four metre drop away to the passage below!  Here all torches were switched off and the boys discovered the true meaning of darkness.

Further exploration revealed a ‘squeeze’ at the far end of the passage as the cave system continued its descent towards the sea, but this was the point the boys turned back – much to the relief of the parent helpers who stood wondering how on earth they were going to fit!

There was much to learn beneath the surface as Mr Foy pointed out many of the features along the walls and roof of the cave. The boys emerged exhilarated and glad to see the daylight!

Auckland’s Lava Caves
Auckland straddles a volcanic field that has produced over 50 volcanoes back through time with fourteen known large lava tube caves that run to the sea. Three Kings (also known as Te Tatua a Riukiuta) is a volcano that erupted 28,500 years ago. It was probably the most complex volcano in the Auckland volcanic field, consisting of five significant scoria cones and about a dozen smaller scoria mounds, sitting inside a large explosion crater. Along the edge of this crater, to the south, runs Mount Albert Road and to the north, Landscape Road. The explosion crater, which was caused by the initial eruption, is the largest in Auckland at 800 metres across and nearly 200 metres deep. The three largest scoria cones of the group were Big King at 133 m high, East King at 120 m high, and Highest King which was 135 m high.

Lava flows ran from here down a stream valley for three kilometres to Western Springs. These flows created lava tunnels which still exist under the ground surface. Thus rainwater falling on Three Kings and the surrounding area is channelled underground for miles until it emerges at Western Springs Lake. Most of these lava tunnels have collapsed but sections of them form caves and can be accessed from private properties in the area.

Lava caves are formed when  a volcano spews lava in streams that cool and harden on the outside, but keep flowing on the inside until it is depleted and a cavern is formed. The cave the boys visited has a system of overlying and interconnected lava tubes segments that total about 180m in length. 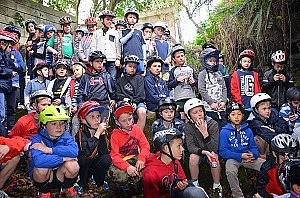 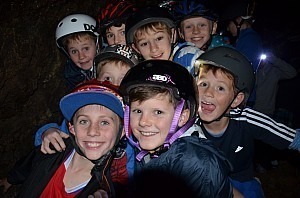 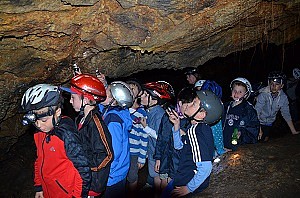 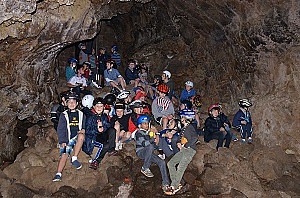 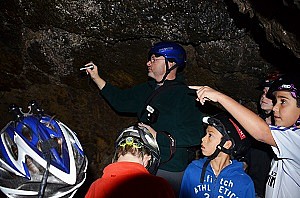