Boys' School Celtic Day - The Best Day of the Year!

Ask any one of the boys at the Boys’ School which is their favourite day of the school year and few would hesitate to tell you Celtic Day, the special annual event to celebrate our Scottish heritage and acknowledge the founders of our school. The day is universally acknowledged as ‘the best’ – the only day of the year when the entire timetable is suspended in favour of activities arranged around a Scottish theme with both fun and learning in mind. This year’s Celtic Day certainly lived up to its reputation providing the tradition, formalities, humour and excitement that our boys have come to expect.

And so it was that the ‘clans’ gathered; each House subdivided to smaller clans where the older, more experienced boys took their junior counterparts under their wings in readiness for the day. Flaming red hair, tam o’shanters, face paint and strategically placed ‘bits’ of tartan created a riot of colour on the field and added to the blend of our dual heritage as the haka group stepped forward to deliver their challenge. This was led by a fearsome Lewis Elliot, one half of his face painted with a moku, counterbalanced with a celtic cross on his other cheek. The clans then fell into step behind the College Pipes and Drums as they marched around the field and into the Jubilee Sports Centre.

Principal, Mr Peter Cassie welcomed guests and Trust Board members. This was Mr Cassie’s first experience of Celtic Day and he said it had been a topic of conversation since his arrival. In this day of firsts he said he donned his kilt and Scottish regalia with a degree of trepidation not fully appreciating what the day would bring but as he greeted the boys arriving early at school brimming with excitement and pride, he knew the day would create special memories.

For a number of years we have welcomed parent Mr Euan Allan to Celtic Day. Mr Allan plays a special role, his broad Scottish accent lending authenticity to the morning. He is well remembered by the boys for his enthusiastic distribution of Mackintoshes Toffees to anything that sounds like a correct answer to his questions on a Scottish theme. The fun is also tempered with a look at Scottish history. On this particular morning, he told the boys a little about Robbie Burns and what drove him to write the Ode to the Haggis.

There is another more important role that Mr Allan undertakes for Celtic Day – coaching the current Head Boy to recite Robbie Burn’s Ode – eight long verses all in Gaelic is no mean feat for a twelve year old; a feat accomplished with a confident and spirited address by Edward Wilkes!

Despite its formidable reputation for being less than palatable, a tray of sample haggis greeted the boys as they left the assembly. This was sampled by a good number of boys who smiled stoically and swallowed quickly – and looked enviously at the trays of shortbread offered to the parents and invited guests!

And then the fun began!

Spirits remained high throughout the day as the boys rotated between ‘wet and dry’ activities, active dancing and games and quiet times for craft, cooking and reflection. From giant balls on the pool, a mini Saint Andrew’s Golf Course on the field, to the much anticipated ‘Castle Siege’ with a multitude of cardboard boxes and wet sponges, there was plenty of outdoor fun. Indoors there was a Celtic show and country dancing in the hall with visiting Celtic minstrel, Bob Bickerton and Year 12 College student, Sarah McQueen laid down the swords to teach the boys the skill of Highland dancing. Around the classrooms there were plenty of activities to engage the boys in a quiet time, building castles from clay, creating tartan artwork, cooking Scottish oatcakes and building a Loch Ness monster. Out on the driveway, a new activity was added this year as a railway track from ‘Edinburgh to Glasgow’ was built to test time and motion as the trains made their journey.

As the school day drew to a close, there was no doubt that this celebration of the School’s Scottish origins had something for everyone. Our thanks go to Euan Allan for his help, to the College Pipes and Drums, to Sarah McQueen for her patience with the less than nimble footed boys, the staff for their work and, in particular, to our Parents and Friends Association for the enormous amount of work they undertake, especially in funding and managing the games on Roselle Lawn. 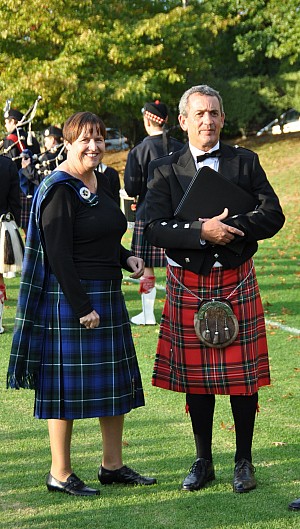 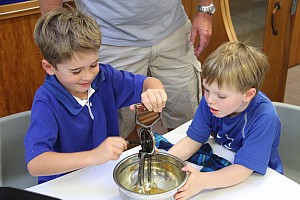 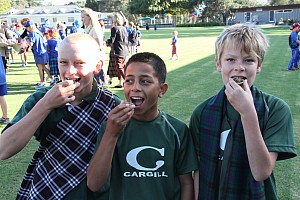 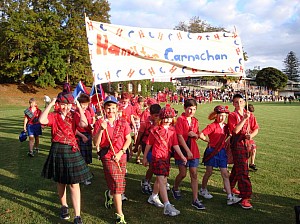 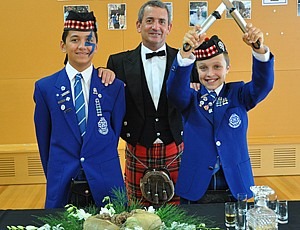