So did y’hear the story of the Johnstone twins?

In a break from tradition, the 2014 College Senior School musical was staged in Term 1 this year. With only a few short weeks of rehearsal time, and hot on the heels of last year’s production, West Side Story, winning the Best School Musical for 2013 at the annual Auckland Showdown Awards, the cast, orchestra and production team gave it their all, to bring yet another fantastic musical to the Saint Kentigern stage.

A tale of the haves and have-nots, Blood Brothers is set in Liverpool, spanning a period from the early 60’s to Thatcher’s Britain of the 80’s when unemployment was rife. It tells the story of Mickey and Edward, two brothers separated at birth, destined to discover each other’s true identities too late.

At the outset, we learn the final outcome - as the show opens, both brothers lie dead. The Narrator (Jamie Hofer), whose menacing presence brings a sense of foreboding, sets the scene:

‘So did y' hear the story of the Johnstone twins? As like each other as two new pins, of one womb born, on the self-same day, how one was kept and one given away? … An’ did y' never hear of the mother so cruel, there's a stone in place of her heart? Then bring her on and come judge for yourselves how she came to play this part.’

The Narrator remains on stage for much of the show; an omniscient onlooker, he stands aside from the action, passing comment in rhyming couplet and marking the passing of time. He is unnerving; a role Jamie plays with aplomb.

Whilst ultimately heart-wrenching, the tale is also heart-warming with plenty of laughs – but throughout you are challenged to ponder on the injustices of British class consciousness, and the place of nature and nurture in the twin’s upbringing.

Lili Taylor took on the role of the twins’ birth mother, Mrs Johnstone. In her early, carefree days, she is still married and happily identifies with the glamorous Marilyn Munroe but life quickly moves on and after seven children and twins on the way, her husband leaves her penniless. To make ends meet, she takes a job as a cleaner for a wealthy local couple, Mr and Mrs Lyons.

These two women are pivotal in the show and both Lili and Eden, with their fine singing voices, play these opposing women brilliantly. Mrs Lyons is desperate to have a child but when she fails to conceive, her husband refuses to adopt. In turn, Mrs Johnstone confides to her employer about her inability to raise two more babies and the well-to-do Mrs Lyons jumps at the chance to raise a child, persuading her to relinquish one of the twins and deceiving her husband into believing she has conceived.  Cold hearted and manipulative, she plays on Mrs Johnstone’s superstition – that should either twin discover that they are one of a pair, they both will die – the curse becomes a recurring theme with constant reminders from the brooding, ever-present Narrator.

Seven years later, Mickey (Lloyd David), the son Mrs Johnstone kept, meets Edward (Joseph Bradshaw), not knowing they are twins, and after learning they share the same birthday, the two boys make a pact to become blood brothers. The next scenes are fun-filled as Senior School students, Lloyd and Joseph, take on the characters of young boys playing riot in the street. Along with older brother, Sammy (Oliver Hadfield) and young friend, Linda (Caitlin Houghton), the two youngsters overcome the class boundaries to become inseparable friends; Mickey teaching Eddie how to swear and make fun of the police!

These students are to be applauded for delivering their lines in thick Liverpudlian accents, with Joseph, as Edward, maintaining the speech and mannerisms of the upper class.

Mrs Lyons is increasingly worried that the truth will come out and, becoming steadily unhinged, she persuades her husband to move away to the country. The Johnstones also move from the Liverpool slums to new council housing, their lives taking a turn for the better and, now 14, Mickey is falling in love with Linda. The boys meet again by chance, as do the mothers. Mrs Lyons’ true personality surfaces and flying into a rage, she tries to kill the mother of the twins but can’t follow it through.

Four years later and the social divide widens; Eddie leaves for university but in his absence Mickey is made redundant and marries the pregnant Linda. When Eddie returns at Christmas ready to party, the rift opens further as Mickey becomes conscious of the wealth divide. To line his pocket, he assists his brother Sammy in a robbery that goes badly wrong and he is sentenced to seven years in prison where he falls into a deep depression. Released early for good behaviour, he is still dependent on drugs and turns away from Linda. Linda seeks help from Eddie which spells the end.

Enraged, Mickey confronts Eddie with a gun and becomes further enraged when he learns they are brothers and that for all these years, he has been denied the chance of a ‘good life.’ When the police misinterpret his actions, they both end up dead.

As the play closes, we reflect on the actions of the mothers, one who had all the trappings of wealth to offer and one who could only offer love. As Mrs Johnstone sings, ‘Tell me it’s not true,’ we recognise where our sympathies lie.

This was a superb show which relied on the acting strengths of Lloyd and Joseph in the role of the twins to be able to portray both the happy-go-lucky youngsters as well as the anguished adults. Eden as Mrs Lyons, was convincing in her portrayal the surrogate mother’s descent into madness. If there was a star of the show, it was Lili, in the role of Mrs Johnstone. She carried the weight of the musical numbers with a performance that was both convincing and flawless. Well done to all these students for their excellent work!

We thank Head of Music, Mr Ross Gerritsen for his vision for this powerful show which included effective set design and excellent musical direction. Head of Drama, Ms Emma Bishop’s direction brought a mix of deep emotion to the stage while, once again, her costume design added an air of authenticity. Mr Lachlan Craig, as chorus coach, helped the cast deliver a powerful vocal performance. Mr Glen Mortensen’s technical leadership, especially in matters of set construction and lighting, were well supported by a number of staff including Ms Megan Buckley (Props), Ms Hannah Lockie (Hair and Make-up) and Mr Terry Haffern (Back Stage). 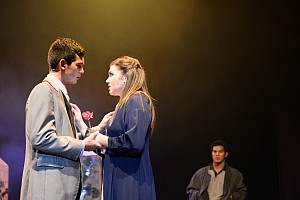 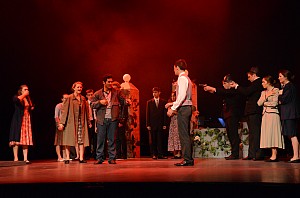 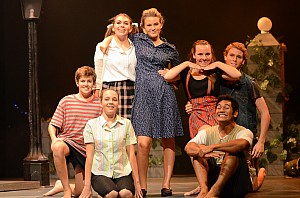 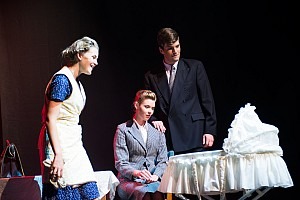 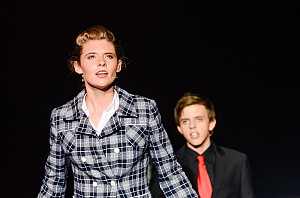 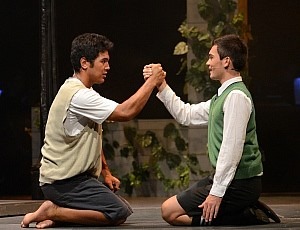 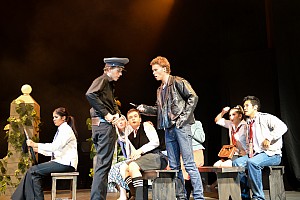 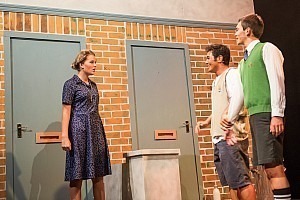 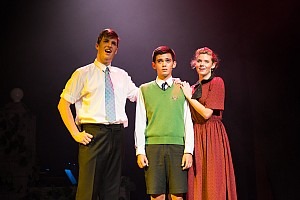