It was a proud moment for the 2013 Premier Girls Cycling Team who were awarded the title of Junior Sports Team of the Year at the Counties Manukau Howick Sports Awards last night.

The team of Madeleine Evans, Elizabeth Mudford, Josie Clow, Cassandra and Mikayla Harvey were nominated after winning the National Secondary School Cycling event last year. The girls were proud to be alongside Valerie Adams who won the award for her outstanding international achievement. 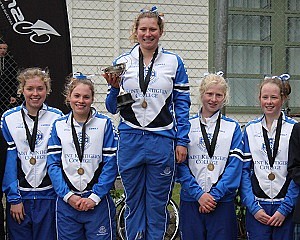