Art and Design Tour to Europe

With thanks to Senior College Year 13 student, Sarah Liu

During the April holidays, 21 senior Design, Painting, Photography, Sculpture and Fashion students, accompanied by staff, went on a tour to London and Paris for a chance to immerse ourselves in a world of Art and Fashion. The stunning range of Art and Fashion we saw was not only eye-opening but also inspiring and motivating to boost us in our own practice. From the National Gallery in Trafalgar Square to the Van Gogh exhibition in Tate Britain and the Louvre in Paris, we were all left in awe of the limitless approaches we could take and the incredible diversity of what we saw on display.

We arrived in London and hit the ground running with a full day of events after a 23 hour flight. After dropping our bags off at the hostel, we headed straight out to our first museum, the National Gallery in Trafalgar Square, where we were encouraged to not only be drawn to the big name pieces on display, but also wander and find the works that spoke to us personally. A quick lunch in Leicester Square and a refresh back at the hostel and we were on the tube and using our ‘oyster cards’ for the first time to get to our next activity, the slide at the ArcelorMittal Orbit. This is the tallest sculpture in the UK and is the world's longest and tallest tunnel slide created by Anish Kapoor and Cecil Balmond. The stunning looping structure of the ArcelorMittal Orbit is an iconic symbol of the Queen Elizabeth Olympic Park and the London Olympics in 2012.

The next day, after the hop-on, hop-off bus, we caught the last half of the changing of the guards ceremony. We walked through Green Park and went to the University College of London to visit the Slade School of Fine Arts where we got to see the students work. This was inspiring as the head of the school walked and talked us through the history of the building We were left in awe of how much history the building had, including being the first UK University to admit women, and its former life as a Chemistry department. Something we all found very interesting was a student developing the pigment for the blackest black that bridged the history and contemporary roles of this school. In the evening, we had a grisly and gripping Jack the Ripper tour through East London.

Day three was all about Tate. We went to Tate Britain first, attending the Van Gogh exhibition where many of his most famous pieces were on display and we saw the influence of Britain on Van Gogh and the influence of Van Gogh on British artists. Dorothea Tanning at Tate Modern was all about surrealism and the limitless expanse of possibility. Exploring the range of the free collection was a physical challenge as we navigated the huge expanse of this former power station turned Art colossus.  In the evening, we watched Matilda The Musical and the talent of the kids was astounding and the set design and choreography were equally stunning.

The V & A, otherwise known as the Victoria and Albert Museum was something else! Over 5000 years of history in the museum, not to mention the size of the building. The fashion students ventured off to a Mary Quant exhibition with her iconic designs of the 1960’s on display. After a picnic lunch in Hyde Park, the afternoon was a visit to the Design Museum. One exhibit we all were fascinated by was the Circadian Dreams by Helga Schmid. Where 12 minutes in the space was equivalent to 24 hours with different music and light colours representing the passing day.

The last day in London was spent at the Photographers’ Gallery where we had a Camera Obscura workshop. This early invention of projecting an image through a small hole of light has been used since the 16th Century and after experimenting with one that filled a small room, we made our own from card, foil and tape. It was great to reduce photography back to such basics in an age when we so often click a button on our phone screens and give little thought to the science behind this art form. The next gallery we visited was at the Southbank Centre. We visited the Diane Arbus & Kader Attia exhibition in the Hayward Gallery. We had a guided tour and the work of Kader Attia challenged the idea of the dominance of western hegemonic models. The photos of Diane Arbus from mid 20th Century New York combined with Kader Attia’s work and the nearby Extinction Rebellion protests let us consider the political situation in Britain and wider Europe.

On Good Friday, we caught the Eurostar to Paris and we all could barely contain our excitement to arrive in the city of love, lights, fashion. After a sweaty transfer to our hostel, we enjoyed a beautiful French dinner of crepes.

On Saturday, we went to the Louvre and saw their most iconic pieces like the Liberty Leading the People, Winged Victory of Samothrace and the a huge room full of people trying to get a peek of Mona Lisa behind glass! In the afternoon, we went to the Palais De Tokyo for a guided tour of Amalgam by Theaster Gates. The guide was excellent and there were strong connections to the work of Kader Attia from only a few days ago. The Yellow Vest protests were again on the streets this weekend and although we did not come into contact with the actual events, the Metro was severely affected with our return journey to the hostel taking 2 hours instead of 30 minutes due to station closes and re-routing.

On the third day in Paris, we set off early morning and climbed over 700 steps to the second floor of the Eiffel tower. We had a guided tour and learnt a lot about the history of the Tower. Did you know that the Eiffel tower used to be red? After this, we went to the Pompidou Centre. An amazing piece of architecture in itself that is often referred to as the ‘inside out’ building. The work here picked up where the Louvre left off with a staggering collection of early 20th Century masterpieces including Duchamps Fountain, early surrealist exquisite corpses right up to contemporary painting, sculpture, installation and performance works.

On the last day in Paris, we went to the Basilique du Sacré-Cœur where we saw the views of Paris as this tourist attraction is at one of the highest points in Paris. After wandering down through Montmarte and jumping on the Big Bus tour we went vintage shopping and to the Galeries Lafayette, an exclusive high-end fashion department store with a stunning domed ceiling.

Our last activity in Paris, and for the trip, was an amazing river cruise along the Seine after dinner, where we went past the Notre Dame and saw the damage from the fire and enjoyed waving to all the friends, lovers, locals and tourists along the river bank.

Our tour to London and Paris is an experience none of us will soon forget and we all feel lucky to have created these memories with such an amazing group of people. We would like to thank every teacher involved in making this trip possible, tour guides and our parents for giving us this opportunity. This trip enabled us to open our eyes a wider world of Art and Fashion that we just don’t get to see down in our corner of the Pacific. The impact of this trip will be seen in a work this year and beyond and I am sure like me, everyone hopes to visit these amazing cities again soon. 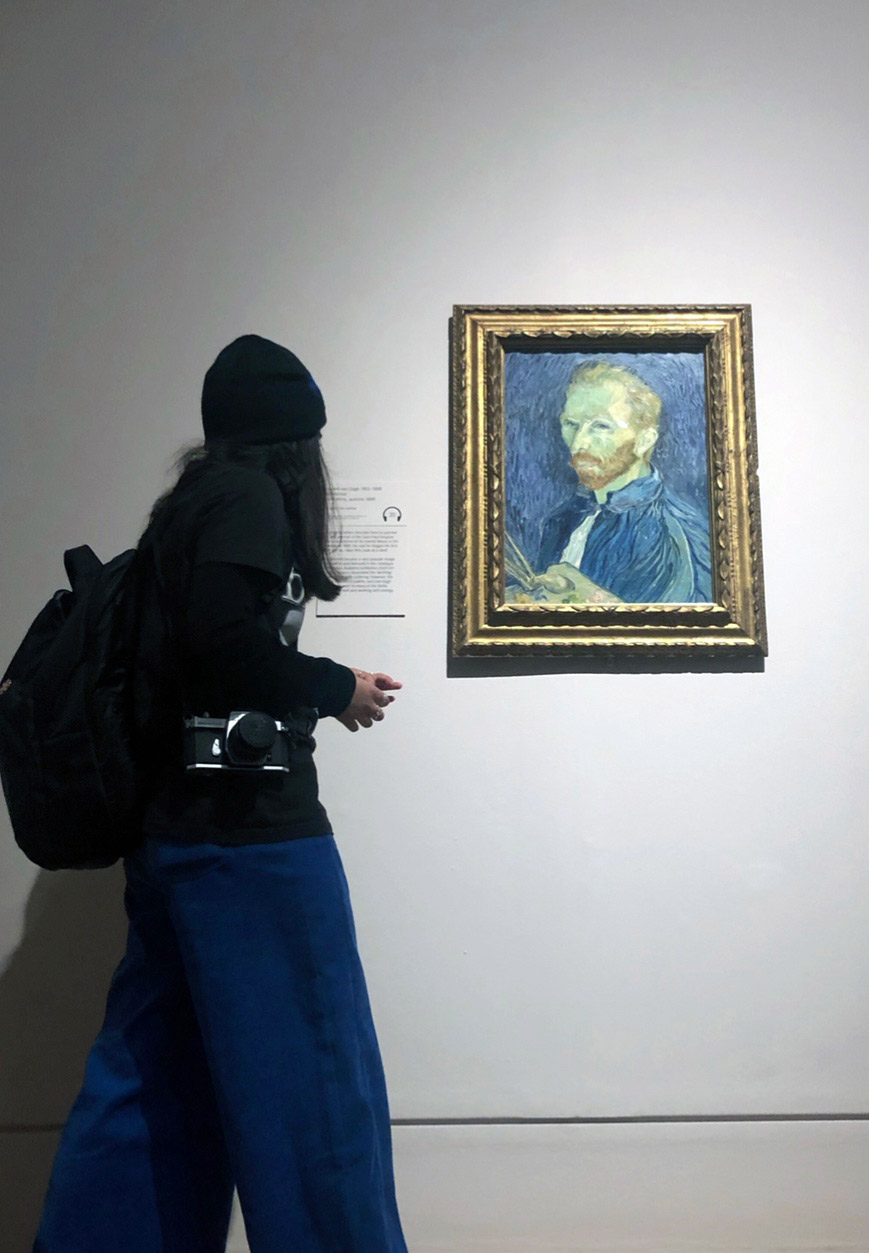 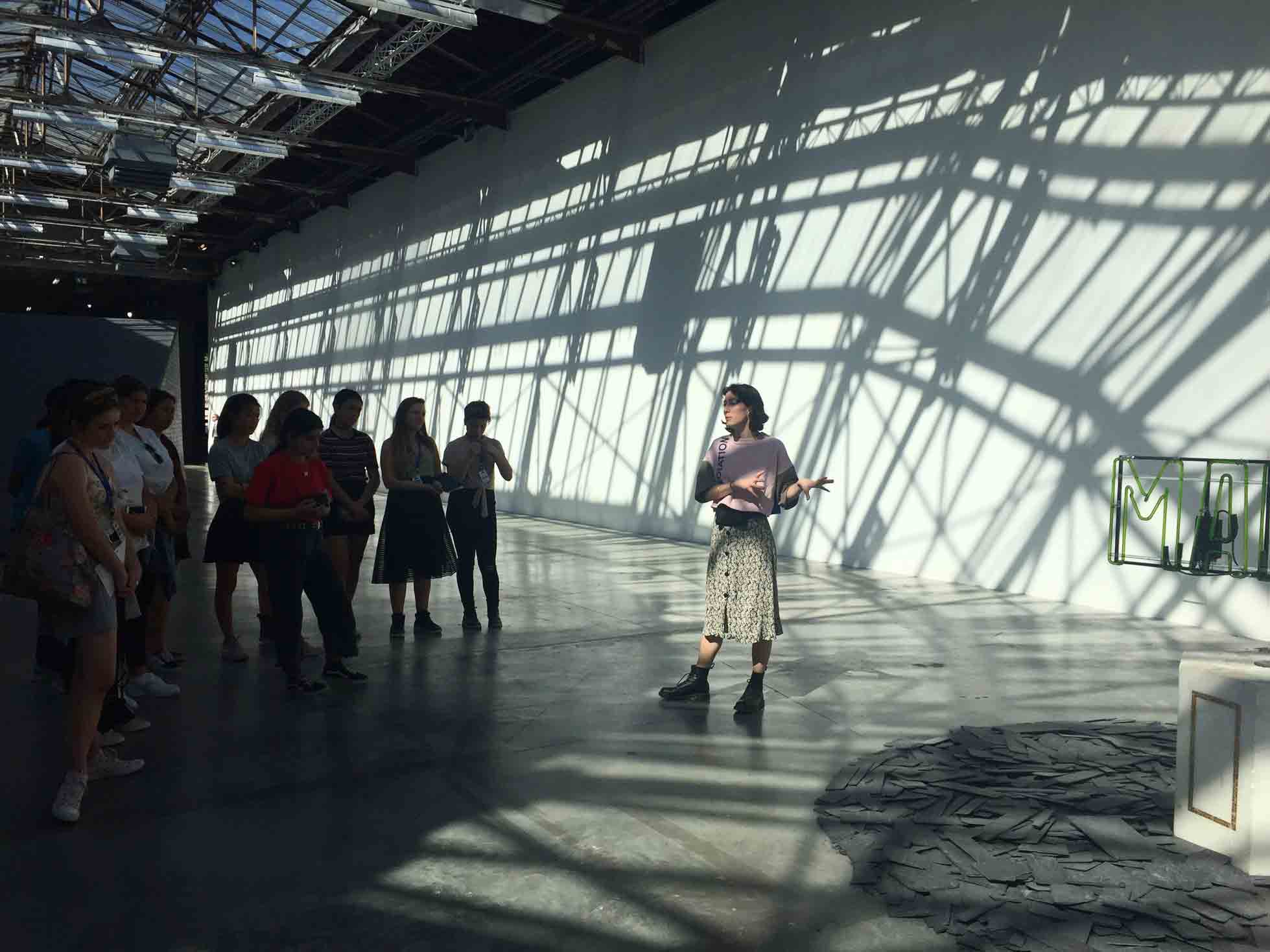 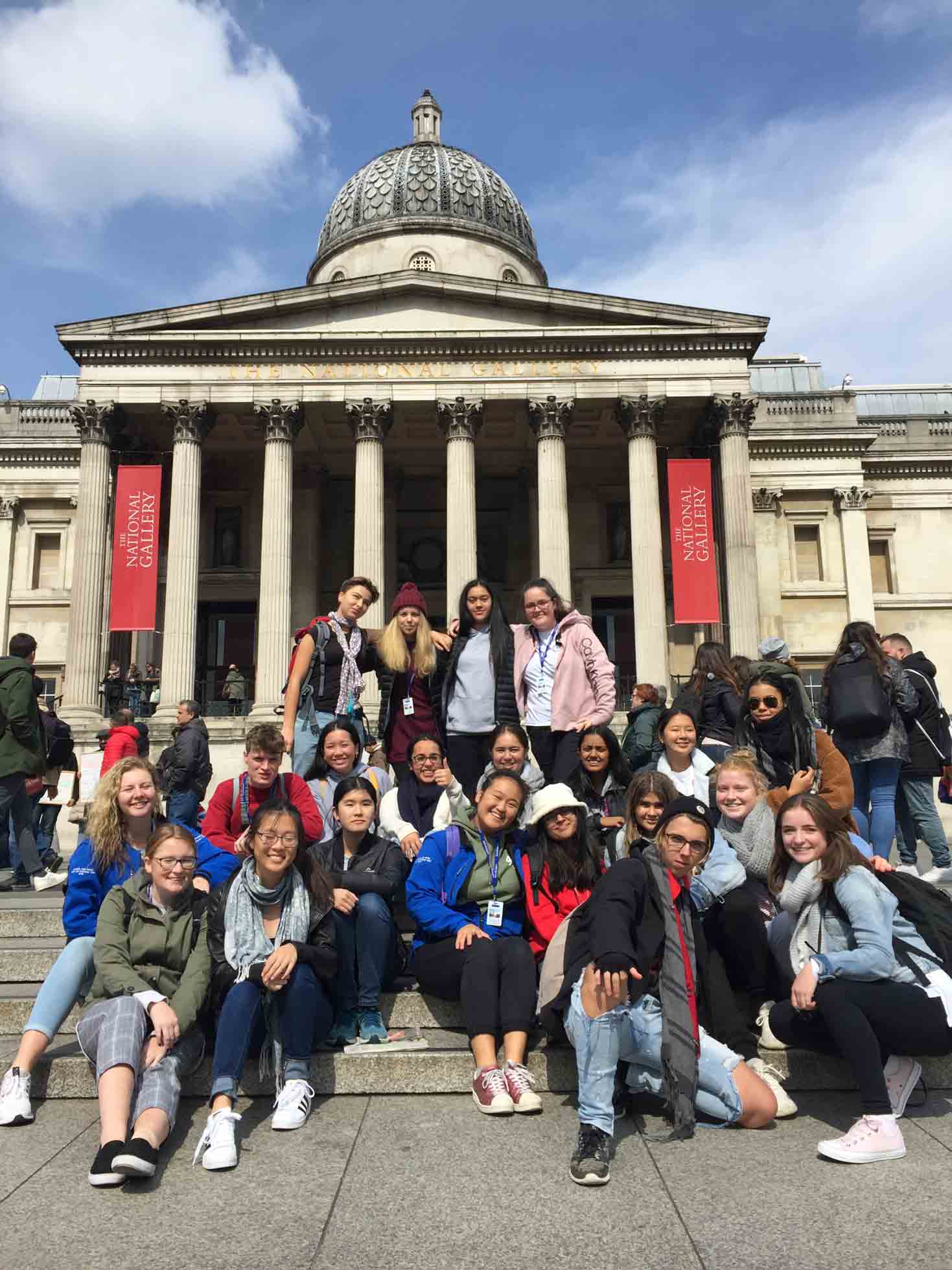 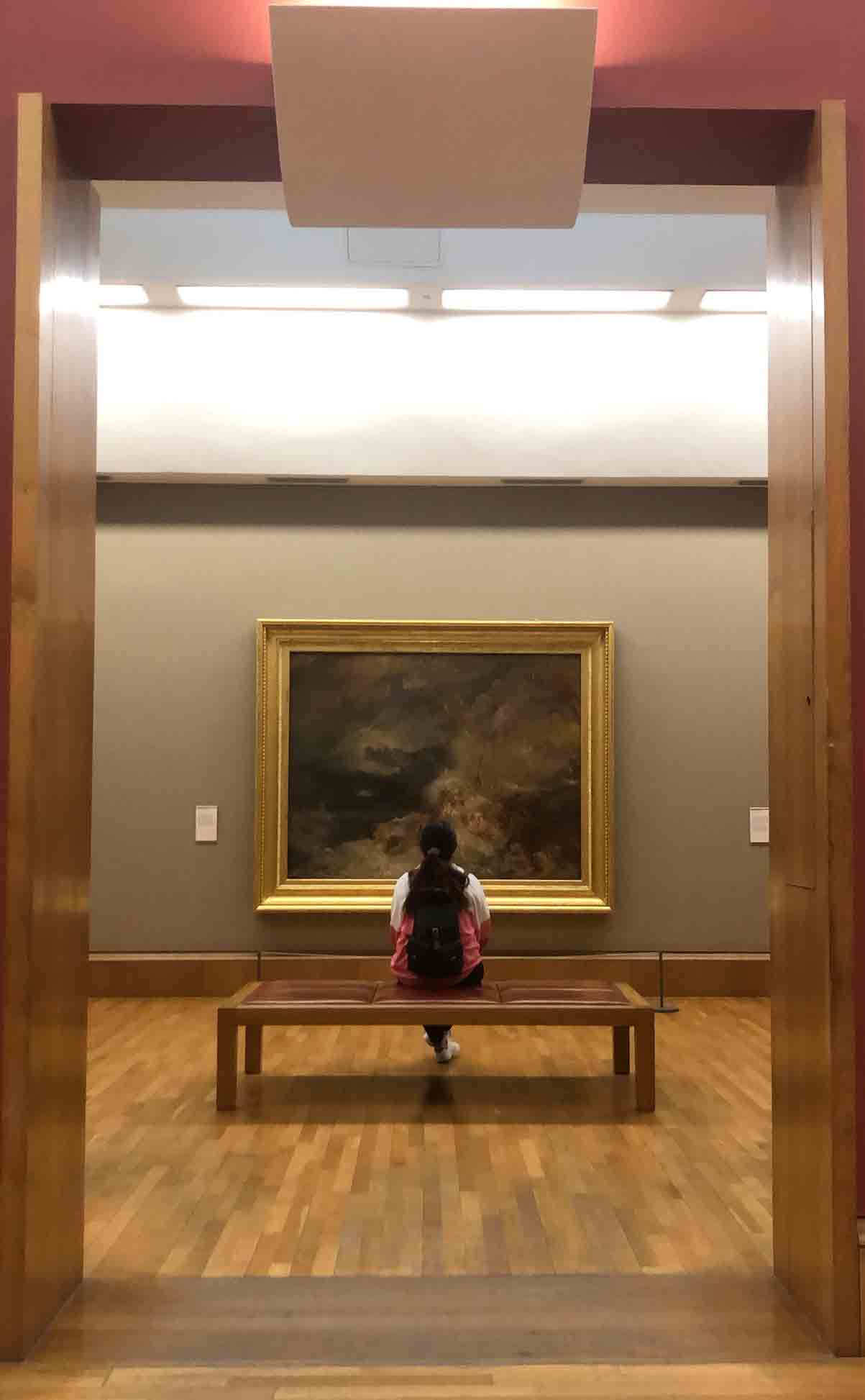 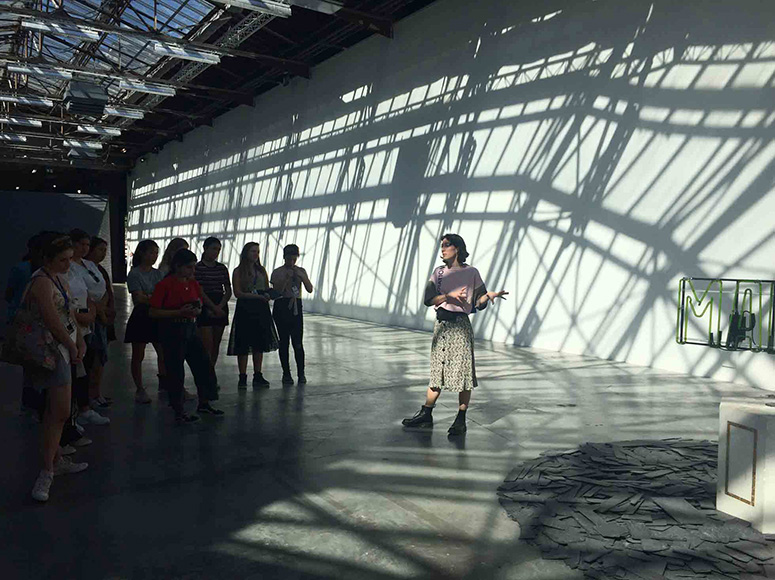